Losing is never easy, especially dropping the first five games at home where the Rays have traditionally been a very tough team to play. Coming into the season, the Rays were tied with Boston for the best home record in baseball over the past three seasons but the results on the field during the first homestand of 2011 were painful on the eyes. The strikeouts, the errors, the weak pop-ups, and the poor situational hitting were all frustrating, but the most frustrating of all was watching the opposition run wild on the basepaths.The next base stealer that John Jaso or Kelly Shoppach throw out will be the first one they nab in 2011 as they are off to an 0-7 12 start in that department.

Since the start of the 2010 season, American League catchers have thrown out 26% of basestealers. They threw out 533 of 2108 (26%) last season but are off to just a 12 for 61 (16%) rate this season. The most frustrating part of the mini-sweep to the Angels is that they were just 1 for 12 in throwing out basestealers coming out of the series against the Royals but the Rays failed to get on base enough to utilize their speed talents to exploit the Angels' inefficiencies behind the plate. Sadly, the Angels did not have that problem and did steal six bases in just two games which was a major factor in their run-producing activities during the series.

Last season, the Rays were just under the league average in throwing out base-runners as they threw out 25% of would-be thieves. Both Jaso and Shoppach threw out 23% of runners while Dioner Navarro actually paced the group last year throwing out 12 of 31 for a 39% success rate.  Not many would admit to missing Navarro after his sub-par 2009 and 2010 seasons at the plate and his pouting antics at the end of last season, but the pitchers certainly do as they have thrown out just 3 of their last 2227 baserunners.

Throwing out base-runners is not all on the catchers as the pitchers are a big part of the equation. How long do they take to get the ball to home plate? How well do they hold the runners on base? Jeff Niemann is a problem in that category as it takes awhile for his 6'9" frame to unfold and get the ball to the plate. Last season, opponents were successful in 21 of their 23 attempts with him on the mound. Tuesday night, Mike Scioscia exploited the pairing of Neimann and Jaso to steal four bases, rather easily.

This kind of situation can be problematic as the pitcher has to pay closer attention to the runners on the bases. That means more looks over, more throws over, and mixing up their timing as they deliver pitches - all of which can be distracting as the pitchers focus on throwing strikes. Those are secondary to the fact that baserunners advancing an extra base increases the opposition's ability to score that much more as the infamous Run Expectancy Chart from The Book, has shown us. 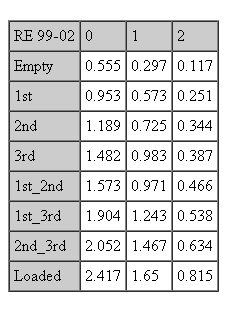 It is partially playing those percentages that has allowed the Rays to enjoy their successes over the past three seasons. Nowadays, the tables are being turned on them as the competition is exploiting those same margins against the Rays when possible. Buck Showalter attempted but one stolen base in the opening series as his club relied more on extra base hits to produce runs. However, Scioiscia had the Angels running in hit and run situations or straight out steals nearly every time an opportunity presented itself. This does not get any easier this weekend as the Rays travel to Chicago where Ozzie Guillen is also an aggressive manager with the running game nor will it be better as the Rays travel to Boston to take on their old speed demon of a teammate and a healthy Jacoby Ellsbury.

The best way to keep runners from stealing bases is to keep them off the base. For the most part, the pitching staff has done their part in that area but they, along with the catchers, need to tighten up their steal-prevention tactics because the opposition is smelling blood when they stare at an 86% success rate for stolen bases over the past ten games. If they cannot, they do have a catcher in AAA who has thrown out 28% of base-stealers over the past two seasons in Robinson Chirinos.