Share All sharing options for: Be Aggressive, B-E Aggressive

"We run more of a Republican style of offense.....we do a lot of things where we don't over-govern it nor do we try to control it too much.

While John Boehner and company are working on shutting down the Federal government, Joe Maddon is doing anything but with the running game. He may call it a Republican style of management, but there is nothing conservative about how the Rays' running game is operating so far this season.

Let's get the obvious jokes out of the way about the Rays not reaching base. In 203 plate appearances this season, only 32 baserunners have occupied first base (15 singles, 17 walks). I bring that up because of two handy metrics available when analyzing stolen base trends for both players and teams: SBA% and SBO%.

SBA% represents the percentage of times a runner will attempt to steal second base while SBO% shows the percentage that runner has the opportunity to execute that stolen base attempt. A steal of third is not represented because it happens so infrequently. After all, the very aggressive Rays attempted 32 steals of third base last year (25 successfully), yet that only represented 14% (32 of 218) of their stolen base attempts. Last season, the Rays were the second most aggressive team in stealing second base (14% SBA%) trailing only their current opponent, the Chicago White Sox. This allowed the Rays to lead the majors in steals despite the fact they were only 13th in SBO% last season at 25% (Yankees tops at 27%).

This season, the Rays SBO% is off to a horrific start as it stands at 16% this morning. 16% would have been five percentage points below the lowest ranked team last season, the Toronto Blue Jays, that had a 21% SBO%. Unless you are a complete defeatist at this point, you can accept the fact that this SBO% will rise as the Rays stop hitting like a high school team would if they took the field against even the most pedestrian major league pitcher. Why is this good news? Because the Rays are running more than ever so far this season.

Last season's 14% SBA was good, but this season, the Rays are trying to take second base at a 25% rate as the club tries something, ANYTHING, to produce more than one run a game. The Royals and the Mariners are the only other teams whose SBA% is at least 20% and the Rays and Mariners have a lot in common in regards to unproductive offenses these days with the Mariners having the much larger track record in that department.

If the constituents in this Rays Republic continue to aggressively self-govern their way on the basepaths, this offense could really be fun to watch once the luck dragons are slayed by Inigo Montoya. 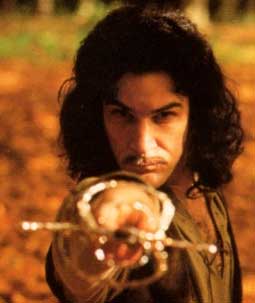 "I am Inigo Montoya. You are killing our stats. Prepare to die!"