A Review of Rays Plate Discipline After One Week

Share All sharing options for: A Review of Rays Plate Discipline After One Week

Obviously it's been a rough week for the Rays at the plate and even more obvious is how foolhardy it is to pluck anything of meaning from the data that we've seen so far. Nothing that has happened should be indicative of what to expect going forward. That doesn't mean that we can't look at some things that have happened and get an idea of what's out of whack. For this I'm using the Fangraphs Plate Discipline percentages including all games through April 7, 2011. For the first part, let's look at team percentages as well as rankings through the first six or seven games: 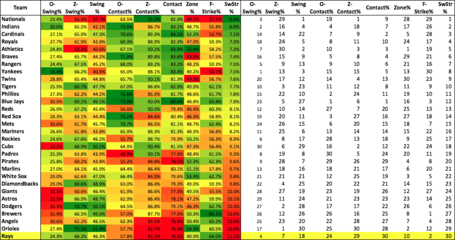 Green is good, red is bad, and yellow is somewhere in the middle if you prefer visual cues over the numbers on the right-hand side. A quick breakdown:

- The Rays are 30th in making contact overall (The Worst)

- The Rays are seeing the 2nd most first-pitch strikes

-The Rays are 30th in Swing Strike%

So the Rays are taking a lot of pitches, especially out of the zone, but they're also seeing a ton of strikes, especially first pitch. When they do make up their mind to swing, they're missing everything, in and out of the zone. The lack of contact and high rates of whiffing go hand in hand, but they are no friend of mine. It's pretty ugly, and though I thought we were swinging too much as a team, apparently we're not swinging enough. However, the lack of contact is much more of an issue in my mind. Let's take a look at the individual players:

The left-hand side shows what has happened so far in a handful of plate appearances for each guy. On the right you can see what these guys have done in their careers. The totals at the bottom are weighted by plate appearances and you will notice that the totals for the left-side match up perfectly with the team totals above. You can look at individual players, but it's basically meaningless to think that what has happened will continue all year. What I'm more concerned with is comparing the totals.

You can see that the Rays are swinging at roughly 3% more pitches out of the zone than they've demonstrated and making about 2% less contact when they do swing at these pitches. Within the zone, they're actually swinging at 4% more pitches, but making 4% less contact. Overall, they're swinging at 4% more pitches than they've shown over their long and short careers, while making 2% more contact. They're seeing the same amount of pitches within the zone, but on first pitches, they're seeing 7% more strikes than throughout their careers. Lastly, they're whiffing 3% more than they've demonstrated throughout their careers.

Our Modus Operandi for the last few years has been to take a lot of pitches and get into bullpens as early as possible. Cliff Lee wrote the blueprint on how to beat us on national television last year over two games of the ALDS last October and it looks like the guys we've faced so far were taking notes. We're seeing a ton of strikes on first pitch and other, better writers have noted how bad it is to get behind in the count. I've always been a proponent of key-holing a pitch until you've got two-strikes. I think that's subtly different from taking first pitch no matter where it is, and I would like to see us get into that mindset more of hitting the first pitch fastball if it's in your wheelhouse.  Pitchers will stop throwing first pitch fastballs only after we start punishing them for doing so. It's a delicate balance, but this team has shown a pretty decent eye on what's a ball and what's a strike, but if they hope to make more contact they need to be swinging at the pitches that they can drive, not constantly fighting off pitcher's pitches.