No Lumber Against Humber; Rays Lose 4-2

Share All sharing options for: No Lumber Against Humber; Rays Lose 4-2

Stop me if you've heard this one before:  A pitcher with fewer than a handful of starts puts up a "career" day and shuts down the Rays offense.  As in: Phil Humber, in only the third start of his career, limited the Rays to only one run and four hits in a career-high--count-'em--six innings.

This year, Rays hitting has been stifled by some exelent pitching and solid game-plan execution by the likes of Jeremy Guthrie, Chris Tillman, Zach Britton, Jered Weaver, Dan Haren, and Edwin Jackson.  Phil Humber mimicked the results of those before him, but this game was less about his dominance and more about the Rays offensive impotence.

Humber threw 85 pitches and was pounding the strike zone all day.  Of course by "pounding" I mean he was throwing low 90's fastballs in the middle of the strike zone.  These were, to quote Brian Anderson, "very hittable pitches."

Why couldn't Rays hitters capitalize on Humber today?  Could it be that the Rays Are Not Taking Advantage of Pitches in the Zone?

More after the jump.

One Rays hitter who did take advantage of Humber's humble fastball was Ben Zobrist in the second inning.  After a Dan Johnson walk to lead off the inning, Zobrist stroked a 3-2 fastball down the right field line scoring Johnson who was trucking it from first.  There was no play at the plate, but I found myself silently wishing for a Major League II "You're standing on the tracks and the train's coming through...butthead" moment with the amount of steam Johnson had accumulated.  Or maybe Johnson could have been Kit Keller from A League of Their Own when she bowled over her sister, Dottie Henson, to win the game for the Racine Belles.  But, that would make A.J. Pierzynski Dottie and I really like Dotte.  Anyhoo...

On the other side of the ball, Wade Davis allowed two runs on five hits, two walks, and one hit batsman while striking out four in six innings.  He threw 103 pitches and didn't miss too many bats on the day (7.8% Swinging Strikes).  Davis' handled the majority of the powerful White Sox bats through his six innings of work, but his undoing (might be too strong of a word) came in the form of Chicago's nine-hole hitter, Brent Morel.

Morel scored the Sox first run as he led off the third inning with a double to left off a belt-high curveball.  He would later score on a Gordon Beckham sacrifice fly to center.  He would also cause the damage in a fourth inning that is unjustly depicted in the boxscore.

The beginning of the inning is pretty straight forward.  Paul Konerko laced a ball to left and Carlos Quentin K'd on four pitches.  Pierzynski then walked, but not before soft foul pop that just missed the outstretched glove of Felipe Lopez.  Brian Anderson seemed to give Lopez the business for missing the ball, but I think we're all just a bit spoiled watching Evan Longoria make that play look routine.  Alexei Ramirez then lined a ball that I did not expect Damon to get to, but I was--happily--wrong.  Davis followed up that nice defense by walking Mark Teahen to load the bases with two outs.  Here's where it gets interesting.

Slayer of Lumberjacks, Brent Morel got completely sawed-off and chipped a soft pop-up into the Bermuda Triangle in between shortstop, second, and the mound.  It was like pre-scandal Tiger Woods chipping one out of the bunker and landing it two feet from the hole at Augusta.  I wanted to cry and blame the 'ol BABIP, but without those two walks to load the bases, that ball means nothing.

Morel's "blast" gave the Sox a 2-1 lead, but the damage would have been oh-so-much worse if Sam Fuld hadn't gotten his Superman on and laid out to rob Juan Pierre of a sure-to-be bases-clearing extra base hit.  If the Rays had won, I would have skipped the recap entirely and just referred everyone to ZBW's Fanshot.  Just look at that. 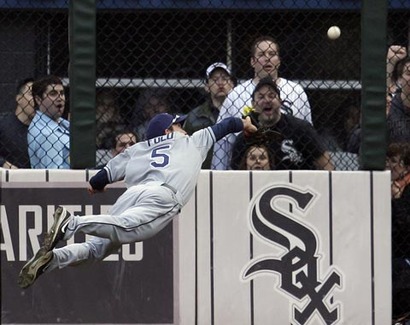 Despite Fuld's fourth inning heroics, the Rays could not come back and chalked up another loss to bring the team to 1-7 and, yet again, tied with the Red Sox for last place in the AL East. 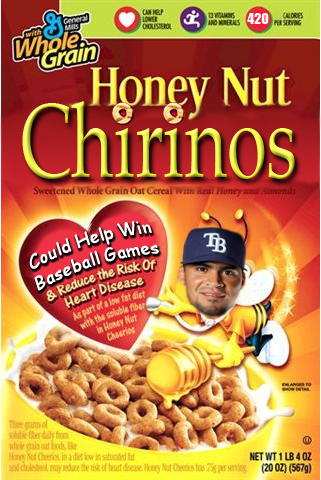