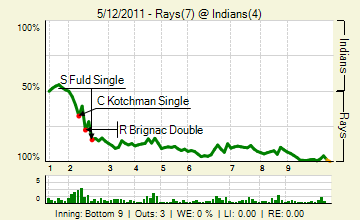 The Rays continued to scorch today behind another strong effort by Cruisin' James Shields. The Rays have now won eight of their last nine series and 21 of their last 28 games, aka a .750 winning percentage over roughly the last month.

After a four-run 2nd anchored by a two-run double from Reid Brignac (his first XBH of the year if you care for that sort of thing) and a two-RBI single by Sam Fuld the Rays would score as many as they would need to not lose. An infield single by Elliot Johnson drove in the Rays fifth run with a two-RBI double by Evan Longoria providing the rest of the offense. Longo got hit again at the plate, but also on a throw down to second that clipped his right heel and ricocheted into his left ankle. Dude is a ball magnet right now so it's nice to see him not showing any averse effects. Ben Zobrist and Matt Joyce continued their surge both reaching base three times while Kelly Shoppach was the lone Ray to not get a hit, though he was able to finagle a walk ensuring that every Ray touched first at least once.

The real story is the continued dominance of James Shields. James went another seven innings with seven strikeouts, one walk, and a dinger to Asdrubal Cabrera on a first pitch fastball that didn't amount to much in the end. All told he garnered 11 swinging strikes mostly through his change (9), but also generating a breeze with the four-seamer (1) and the curve (1). Jamie never really looked to break a sweat though the dinger got him a bit flustered. The real beauty of this performance was Shieldsy generating nine ground balls as opposed to his four fly balls and three line drives. Here's his pitch types to lefties: 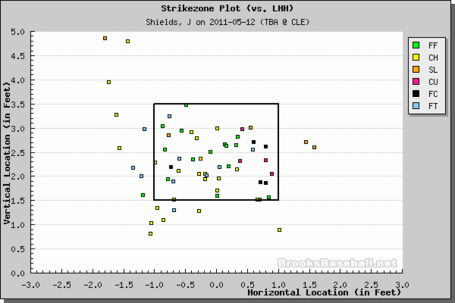 You can see that he was all over the zone against lefties, but clustered a bunch of change ups low and away.

Here's the same to righties: 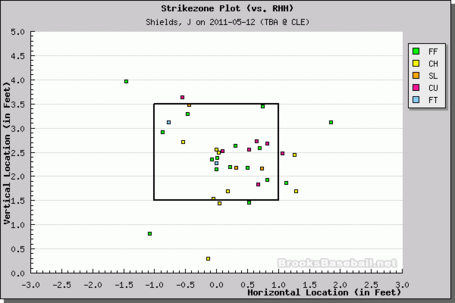 I love that he's mostly working middle and away to righties and keeping the ball middle and down as much as possible. James is very exciting to watch when he's on his game. This one seemed like a game where he was just cruising from the get go and I guess four-run leads allow you to do that. Lastly, Shields bailed himself out mightily by picking off a runner at first and seeming to get away with one on a pickoff at second that was sold hard by Elliot Johnson.

The bullpen pitched to the score as Joel Peralta and Kyle Farnsworth allowed a run a piece. Not much excitement there. The Rays return home looking to keep the mojo going against the recently swept Baltimore Orioles. I've been told good seats are still available for this weekend series so what's your excuse for not going out to the old ballpark for a game over the next couple of days?