Stacking Up Against the Competition

Share All sharing options for: Stacking Up Against the Competition

One way to look at how the Rays are doing thus far this season is to see how they stack up statistically to their competition. They are competing with 13 other American League teams for a post-season berth so it is more important to see how the Rays' statistics stack up against their competition. It is obvious the Rays are a bit deficient at some positions on the field, but so are other teams which helps mitigate those weaknesses.

The table below shows how the Rays are performing at each position on the field. sOPS+ is a metric used by baseball-reference and is defined as: 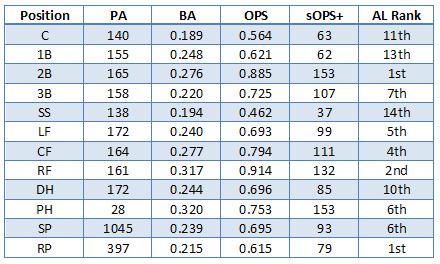 Frankly, the fact that that the Rays have a two-game lead in the American League East with these numbers is quite surprising. Four spots in the regular lineup rank in the bottom four spots in the American League at that position and comparing the Rays production at each position to their competition helps frame how good or poor the production has been.

Nobody has been happy with the offensive production from the catching duo of John Jaso and Kelly Shoppach but the Red Sox, Mariners, and Twins have seen even worse offensive production from that position. Many probably thought that the catchers were the biggest drag on the offense but they take a back seat to the shortstop position where Reid Brignac and crew have struggled mightily. The collection of shortstops has gone 25 for 129 with just five doubles which is slightly worse than what Jack Wilson and company has done in Seattle thus far this season.

Despite Casey Kotchman's best efforts to offset Dan Johnson's struggles this season, the Rays production at first only Daric Barton and crew in Oakland. The Rays first basemen have just six extra base hits this season which equals their RBI total on the season and that production is less than what Adrian Gonzalez has done for the Red Sox in just the past four games.

Johnny Damon has given the Rays some production as the club's designated hitter this season, but the production at that spot in the lineup is still no better than it was last season when it ranked 10th best in the league. In fact, the DH production for the Rays has been 9th, 12th, and 10th over the past three seasons so Damon's overall impact to the offense has been a wash.

The corner outfield spots have been productive fueled by Sam Fuld's early hot start and Matt Joyce picking up where Fuld left off. Third base has been league average production despite the fact Evan Longoria missed 26 games with his oblique injury and Ben Zobrist and crew lead the league for all second base production. The pitchers have definitely been the strength of the success as both the starters and the relievers have been better than most of the competition. The Rays staff on the whole is sixth best in the league thus far as some of the extreme successes that James Shields, David Price, and Jeremy Hellickson have found at times this season are offset by the struggles of Jeff Niemann, Wade Davis, and Andy Sonnanstine so far.

The bullpen continues to surprise everyone as their production paces the pack in the American League. Part of that success is due to the fact that they've been utilized less than any other bullpen in the league as Joe Maddon has allowed the starters to work deep into games but the pen should receive a nice jolt of help with the return of J.P. Howell in the next few days. The bullpen has the third best BABIP in all of baseball at just .246 and their xFIP is the third worst in baseball at 4.51 so it bears watching as the team heads to the summer months how sustainable this early-season performance is.

If this early season success is to be sustainable, the club will clearly need to get more production from certain positions in the lineup. It is expected that players such as Desmond Jennings and Brandon Guyer will be promoted in the coming weeks, but any other offensive promotions are uncertain at this time if not unlikely given the lack of depth at the upper levels in regards to offensive prospects in Montgomery and Durham. Some players on the roster are enjoying extreme levels of success right now which has helped make up for the lack of production from others in the lineup. As those players regress to somewhat career norms, it is important for the others to pick up the slack in order for the Rays to maintain their current level of success. Tougher times are ahead for the Rays who up until now, have enjoyed the softest strength of schedule in the American League. That all changes starting Monday as the Yankees come to town which precedes a very challenging travel schedule over the next few weeks that will test their current AL-best road record of 13-5. 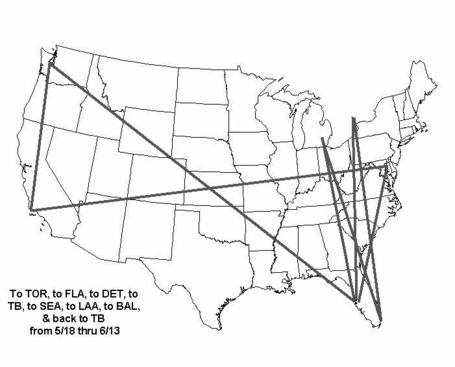