A Look at Catcher Defense in Runs

Share All sharing options for: A Look at Catcher Defense in Runs

I recently saw yet another interesting article from Matt Klaassen over at Beyond the Boxscore.  He's found a not perfect, but nice way to look at catcher defense using their Caught Stealing (CS), Wild Pitch + Passed Ball (WPPB), and both Throwing (TE) and Fielding (FE) Errors. Well what really caught my eye was that he put together the numbers for May 2011 and wouldn't you know it, Kelly Shoppach was rated second best saving around 2.7 runs over the course of the month primarily through his ability to block pitches and throw out would-be thieves.

This got me to wondering if Shoppach has always been this good or if it's just a good month. As my brain tends to wander this got me interested in seeing how all the major active catchers have fared over their careers through May 12, 2011. I looked at the two catchers that have the most Plate Appearances (PA) for each team and in some cases went to a third guy. First off, let's take a look at the American League East catchers:

PA refers to the number of Plate Appearances that a catcher has been behind the dish for. You'll notice that player run the gambit from as few as 744 to as many as 50,132. As always, keep sample size in the back of your mind. The larger the sample the more likely what we're seeing is real and not a mirage. CS refers to Caught Stealing while SBA adds in successful thefts to give a total number of Stolen Base Attempts. WP refers to Wild Pitches and PB is for Passed Balls. Meanwhile, TE and FE stand for Throwing Errors and Fielding Errors, respectively. All data comes from Baseball-reference.

The right-hand portion of the table shows the raw data run through the weighted formulas and adjusted per 4,000 PA behind the plate. The typical team is going to have around 6,000 PA for the entirety of their catching stable. Most managers not named Trey Hillman will not run their catcher out there every single day so I've based a catching season on getting two thirds of a team's total catching load. You can disagree with this, but it's really just going to scale the data not change the sign. Lastly, league rates are based on 2010. These probably fluctuate a bit, but I don't think it's going to be a huge deal.

-Jose Molina leads the pack in the AL East with Francisco Cervelli bringing up the rear. Shoppach is middle of the pack, but on the negative side and you can see that Jaso is pretty lousy back there.

-Molina destroys his catching brethren in runs from CS, while Salty is the worst at CS. Shopp is a bit below average while Jaso is very bad.

-Matt Wieters likes to get dirty leading the way in WPPB runs, while Arencibia looks like he needs some more work. Shopp is above average here and it's his highest rated component while Jaso is again well below average.

-Jake Fox and Russell Martin are the best at avoiding TE, while again Salty comes in pretty badly. Jason comes in at exactly average while Shopp is a little below.

-Arencibia and Martin are the best at avoiding FE, while Jake Fox is abysmal. Jaso and Shopp are both below average.

I find this really interesting for all those that think Wieters has not lived up to his potential. Sure, other guys might carry a bigger bat, but at this defense-first position he brings durability and a reliable glove. I don't think it should be a surprise that Molina is so good at throwing out base-stealers as we've seen plenty of great throws out of him. I'm surprised by Cervelli as you would think he would be a very good defensive catcher considering he can't hit and, afterall, it's the Yankees, but he loses almost a win every year with his glove alone leaving him virtually replacement-level. Salty and Jaso are equally bad behind the plate, but at least Jaso seems to be hitting a bit of late.

Keep in mind that this doesn't attempt to quantify framing, grit, sequencing, handling a staff, mustache%, etc... so please keep all comments within the scope of the research. For your viewing pleasure here is the rest of MLB sorted by Total Runs per 4,000 PA: 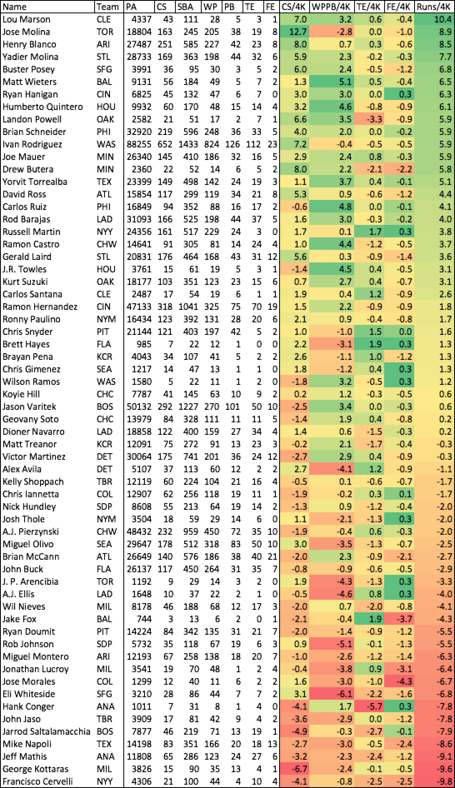 Kelly Shoppach checks in at #38 out of 62, while John Jaso is much lower at #57. That isn't very pretty for Johnny J when you compare him to the rest of the league. For SnGs I looked at Dioner Navarro who checked in at 0.2 Runs/4K in his career. Infinitely LOLworthy is the fact that Jeff Mathis is the third worst in his career of these guys about half a run worse than Mike Napoli. There's a lot here especially interesting to other teams, but as far as a Rays-centric approach I think this is a good stopping point. Get at me in the comments with any questions or quips.

Feel free to download the workbook here if you think you can use it in any way: DOWNLOAD LINK