The Legend of Sam Fuld was born on April 11th, 2011 when, among other things, the Tiny-Spartan-Warrior snuck a two-run home run around Fenway Park's Pesky's Pole and led the Rays to a 16-5 rout of the Red Sox.  Fuld has understandably cooled since his nuclear start, and in the light of day we can all agree that Fuld's homer was more "wall-scraper" than "Legend-Maker."   So many of us were resigned to the fact that without Fenway's 302-foot porch, Sammy wouldn't be reaching the seats again.

And yesterday we'd be wrong.

In the bottom of the sixth inning, with one on and no outs, Fuld turned on 3-1 fastball from Yankees' starter AJ Burnett and sent the ball deep into the right field seats.  The two-run blast started a Rays five-run sixth-inning  that would see three more runs cross home plate, all with two outs.

Evan Longoria singled, moved to second on a wild pitch, and scored on a Matt Joyce RBI single through the right side.  Burnett was shaken as he pitched to BJ Upton, throwing another wild pitch before hanging a curveball that BJ skyrocketed into the left-centerfield stands to give the Rays a 6-5 lead, and eventually, the game. 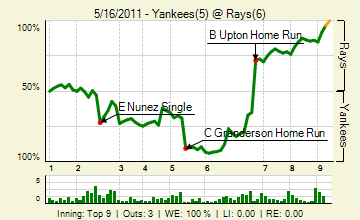 Price and bullets after the jump.

If you're wondering why the Rays needed a five-run comeback, then you'll have to take a peek at David Price's "meh" outing.  His Line: 5 IP, 5ER, 6H, 1BB, 5K.  Price didn't have his best stuff on the day, but, on the other hand, he was also pumping gas.  79 of Price's 97 pitches were fastballs that averaged 96.29 MPH and topped out at 98.5!  He came out blazing, not throwing an off-speed pitch until the third inning.

Price allowed two runs in the second, thanks to a few well placed groundballs, but was able to recover well enough in the third and fourth.  Unfortunately, in the fifth inning, Price left a 97MPH fastball over the heart of the plate to Curtis Granderson who obliterated the ball into the right field seats for a three-run homer.

This is what a three-run Crutis Granderson homer looks like: