Share All sharing options for: Trendspotting: FIP and ERA Battle For Planet Earth

Two of the most popular measures of a pitcher's performance are Fielding Independent Pitching (FIP) and Earned Run Average (ERA). I expect everyone that reads here to be pretty familiar with the advantages and weaknesses of each of these so I will skip right ahead to the meat and potatoes. If you do want to read more about these, click the links.

The idea here is to look at 10-game moving averages of FIP and ERA to get an idea of whether a team has been seeing (un)favorable luck in this young season. For those that are skeptical of the relationship between these numbers and the likelihood that they are to regress towards each other over the course of a season I present the 2010 Rays: 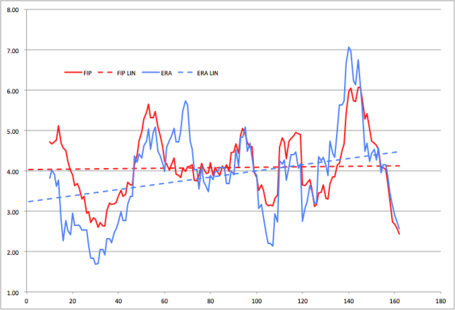 The solid lines represent the 10-game moving average while the dashed line shows a linear trendline over the totality of the season for each measure. Note that I have used 3.11 as the constant term for FIP as this is what I've calculated for the American League in 2010.

*The moving averages show a team that was quite a bit lucky to start the year, but that luck did not carry through the entirety of the season as you can follow the flutters to your heart's content

*Both measures point to a team that experienced prolonged periods of excellence as the moving averages are generally under 5.00 and also spent quite a bit of time under 4.00

*This last point is confirmed by the linear trends that have Team FIP sitting slightly north of 4.00 for the year and Team ERA spending the majority of the year south of 3.00 until that last big bump in the road carried the average up close to 4.50

With this bit of evidence out there that these things are closely related and not just magic numbers pulled out of the air let's take a look at 2011 through out first 28 games: 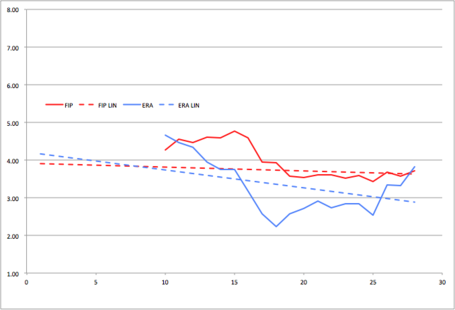 *I have calculated the AL Constant for FIP at 2.96 which is incredibly low so far. When I come back to this later in the year the Constant will be recalculated and will most likely go up.

*The lovely thing is that you should not confuse good luck with gawdawful performance. The Rays have pitched well enough to maintain a sub-4.00 FIP over their last three turns and have seen a resulting ERA in the sub-3.00 range.

* The Earned Run luck should stabilize, but that doesn't mean you should expect the staff to fall apart at the seams as you should still expect them to pitch to a roughly 4.00 FIP/ERA as a team.

Time will tell as we've seen good performances in just about every game and we can really only go downhill from here. This will be interesting to follow over the course of the year to see when the sun is shining on our face and when a giant boot is kicking our ass. In an interview with Bluebird Banter I mentioned that my MVP through the early going was Jim Hickey. This hasn't changed in my eyes as the team, as a whole, continues to have much success so far. Let's hope that what we're seeing proves to be more oasis than mirage.