The Rays offense entered Thursday's game with the Blue Jays ranked 7th in the American League with 4.33 runs per game. One perceived area of weakness with the Rays 2011 offense seems to be the lack of success in situational hitting. This area became a hot topic of discussion after Wednesday's game versus the Blue Jays when B.J. Upton  failed to deliver a hit with the bases loaded and less than two outs and Casey Kotchman struck out on a pitch which seemed about a foot out of the strike zone. The discussion about which outcome was worse was prevalent during the evening on Twitter and carried over to the DRB articles on Thursday morning. Many people brought great opinions and facts tot the table and as I read each one I wondered how the Rays "actually" perform in the situational hitting categories.

The statistics below are gathered from Baseball Reference and includes several metrics: where the Rays rank in the American League, where they ranked in the AL in 2010, the 2011 AL Average, the 2011 AL Best, and the 2011 AL Worst. The categories I wanted to look at were the productive out opportunity and corresponding success rate, the batted runners on base and success rate, runner on 3rd with less than two outs and scoring rate, and runner at 2nd with nobody out and the advance rate (link to the data here). The data does indicate that the Rays are struggling in areas such as successful sacrifice bunts, capitalizing on productive outs, and scoring the run when a runner is at 3rd with less than two outs but are doing well in avoiding grounding into double plays, converting runners on base into runs, and advancing the runner from second base with nobody out. One way, certainly not the only way, the Rays can increase their run production will be get more runners on base and capitalize on the driving the runner home from third with less than two outs. 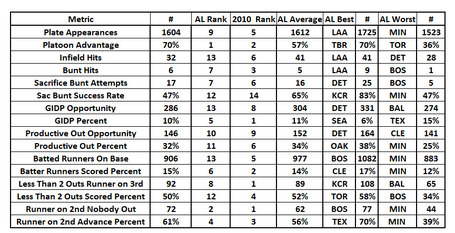 The productive out opportunity occurs when a batter comes up to bat with a runner on base. The success rate is dependent on three outcomes. The first is when a fly ball, grounder or bunt advances a runner with nobody out, the second is when a pitcher bunts to advance a runner with one out, or when a grounder or fly ball scores a run with one out. The Rays rank 10th in the AL with 146 of these opportunities and have successfully moved the runner along 47 times (32%) which ranks 11th in the AL.

Batted runners on base is simply defined as the number of baserunners when a batter is at the plate. The Rays rank 13th in the AL in this category with 906 runners on base  and 140 of these runners have scored (15%) which ranks 6th in the AL.

The team leader  (minimum 70 plate appearances) in productive out % this season is Johnny Damon at 50%, batted run score % is Ben Zobrist (22%), driving the runner in from 3rd base with less than two outs are Johnny Damon and Sam Fuld at 75%, and advancing the runner from 2nd base and nobody out is Evan Longoria who is a perfect 4 for 4. The data for each individual Ray is provided in the table below.