The Rays and Situational Hitting

Share All sharing options for: The Rays and Situational Hitting

One of the great things about social media in games is that you get to see instant commentary from the fan base throughout the different situations in games. The downside to those instant reactions is that they are not always accurate. We learned last night that Casey Kotchman is the best two-strike hitter in baseball right now because Staats and Anderson told us so. We can also look that up to see just how well he has done this season compared to seasons past.

The downside about social media is the immediateness of it and how it often does not allow people to quantify their own tweets, thread posts, or Facebook status updates before they post them. After all, Dewayne and Brian have members in the team communications department that supply all of that information and they as well as the rest of the media members in the press box are supplied with ample amounts of data notes such as that before each game.

To even that playing field, at a team level, I figured it would be handy if you knew just how well or poorly the team did in regards to situational hitting so you can be better informed in your social media interactions in the future as well as set your expectations for different situations in the game accordingly. sOPS+ represents performance in that split relative to league average; a score of 100 is league average while better scores are higher than 100. 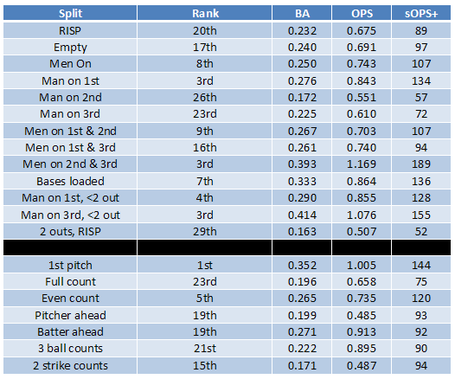 The team's inconsistent offense not only comes from production issues from certain spots in the lineup, it also comes from a failure to maximize production in situational hitting. The team ranks in the bottom 50% of half of the 20 splits that are called out in the table above, which puts an extra strain on the pitching and defense to carry the load toward success in the standings. Moving forward, the Rays need to produce better results in their situational hitting and a good place to start would be hitting for higher averages.
The team is in the top five in doubles, triples, and home runs but is below league average in overall hits. The team is not pacing the league in steals as it did for most of the season last year which puts the responsibility on the hitters to get runners on first over into scoring position and the new aggressive approach at the plate has seen the Rays go from the highest walk total in 2010 to leading only Chicago and Minnesota this season. Evan Longoria is just getting back into the offense and has yet to find his regular stride and more help will be on the way internally as Desmond Jennings and Brandon Guyer join the club, but other bats will need to step up and help out. Elliot Johnson is doing some of that in recent days in place of the struggling Reid Brignac, but more run production will need to come from the first base situation and the catching duo needs to chip in as well. Acquiring the recently-released Russell Branyan would be a shrewd first move, if The Muscle would be willing to return to the Tampa Bay area.