On this mathematical day of reckoning, David Price looked to give a boost to a Rays team coming off a loss and rebound from his rough start on Monday as well.  Alas, neither would work out in Price's favor today as he allowed five runs for the second game in a row and, this time, the Rays hitters couldn't bail him out.

The Marlins wasted no time getting on the board today as Emilio Bonifacio walked to lead off the game, Hanley Ramirez laid down a perfect bunt single, and Logan Morrison drove an oppo-double to left to plate both runners.  Price would go on to retire the next nine Marlins in a row, but he never really looked like he was in control.

He averaged around 93MPH on his fastball today, which is down from 95+ in his last start.  Brooks Baseball's PitchFX has Price throwing 38 (48.7%) four-seam fastballs.  For comparison, in his last start, Price threw 2 (2.5%).  Now, of course, the caveats of PitchFX classifying pitches come to mind, but no matter the grip, Price's fastball was straighter and slower this afternoon.  Combine that with some shaky control, and it's no mystery why the Marlins feasted on the Velociraptor Jesus, today.

Take the pitch (3) that sealed the Marlins' victory, for example:

With an 0-2 count to Omar Infante, Price left a 93MPH fastball up in the zone and the Big Baby crushed it to left for a two-run homer.  I imagine that Price missed his spot on that pitch as he was working Infante away for the first two pitchs of the at bat, but if Price is throwing 95-97 instead of 93, then Infante probably fans, takes a seat, and the Marlins are left with just three runs.

Javier Vazquez, suspect O, and an inning that just wouldn't end... after the jump.

Of course, this loss was not just on Price, the offense also failed spectacularly against Marlins "Ace" Cy Young Javier Vazquez.

Vazquez pitched his longest outing of the year, going seven innings while only allowing three hits and two walks and striking out seven Rays hitters.  Like Price, Vazquez was unimpressive, but unlike the Marlins, the Rays couldn't take advantage.

The Rays made some noise in the second, with Casey Kotchman on third and one out, but John Jaso could not make even a productive out as he K'd.  Reid Brignac was finally given the respect he deserves as he was intentionally walked to load the bases for slugger David Price, but while Price worked a full count, he couldn't GTMI and grounded softly to shortstop.

The Rays scored their first run in the eighth without as much as a hit.  Three Marlin's pitchers would combine to issue four walks and put the Rays on the board.  I could type it all out for you, but I'll just cut/paste this picture for you instead: 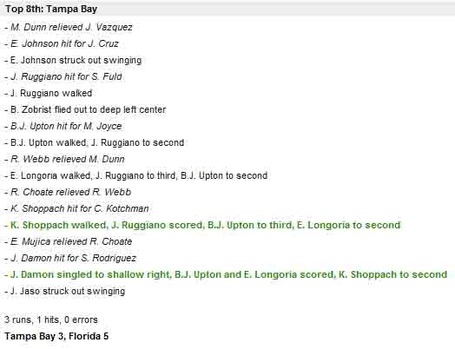 The bottom of the 8th wasn't much prettier: 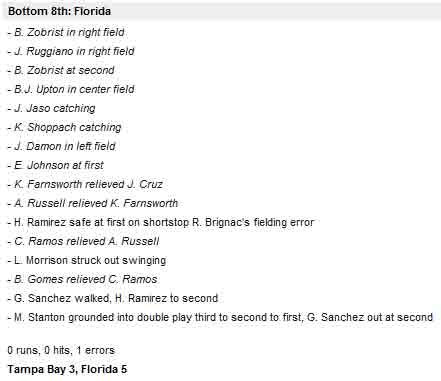 All told, the eighth inning involved seven pitchers, five pinch hitters, four Just For Men "Can I Borrow Some Milk?" commercials, and clocked in at a whopping 42 minutes (per my DVR).  I'd like to say Joe Maddon pwned Marlins' manager Edwin Rodriguez in the match-up game, but since all the offense came on walks and a Johnny Damon two RBI seeing-eye single, I can't be sure.