Share All sharing options for: Adjusting Expectations: Should Rays Fans Be Talking Playoffs?

Yes, I know RJ beat me to this topic today. But as I already have some research done, I'm going to elaborate and expand upon his post.

Should the Rays be thinking about the playoffs? On the surface, that seems like such an asinine question: of course they should. The Rays are sitting in first place at the end of May, almost one third of the way through the season, and they've done it despite missing Evan Longoria for a month. The Yankees and Red Sox both look like they have holes in their pitching rotations, so there are plenty of reasons to be optimistic if you're a Rays fan.

But if you've been around the site recently, you know that I've been taking a different line on the year: I have my doubts about this roster. The Rays certainly have their strengths, but overall, I don't see this team as good enough to hang in with the Yankees and Red Sox all season. Andy Sonnanstine is in the rotation, Wade Davis' new pitching style saddens me, Sam Fuld is playing like a replacement level player in left, Elliot Johnson is starting more and more often, Reid Brignac has become a black hole at the plate -- I look around and I just see all these reasons why the Rays aren't that good a team. I'm definitely not a pessimist -- I'm normally a hopeless optimist -- so it is very out of character for me to be one of the few Negative Nancies around these parts.

And so, I decided to do some research. Am I being crazy? Is this team actually much better than I think? We're a couple months into the season, so let's look at some updated projections and see if we can nail down the talent level of the Rays' current roster.

In an effort to make a rigorous argument, I'm going to look at three different means of estimating the Rays' team talent level.

1. Extrapolating this season's results for the full year.

This is a simple concept: let's just look at how the Rays have done so far this year and extend those results over the course of the entire year. Maybe some players will do better, but some will also do worse; this obviously isn't a perfect method, but it's good for a quick and dirty estimate.

By extrapolating the Rays current winning percentage (.542), the Rays would win around 87 games this season. If we extrapolate their current Wins Above Replacement (WAR) total, the Rays would finish the year with just over 42 WAR, which translates to around 86 wins.

As I mentioned, RJ Anderson did a full writeup about the Rays' playoff odds according to Baseball Prospectus. Unlike Cool Standings, which simply calculates a team's playoff chance based on their record and place in the standings at a certain date, BPro calculates team playoff odds based on the projected talent level of each club. They update the rosters of each team over the course of the season and revise projections based on how players have performed, so their projections should be rather accurate.

And according to their most recent projections, the Rays currently have a 20% chance at making the playoffs. BPro seems to think the Rays' current roster has the talent level of a .508 ball club, so if this roster remained intact and played as BPro expects for the remainder of the year, the Rays would finish the season with 84 wins.

BPro is great, but their preseason PECOTA projections were more pessimistic on the Rays than most other projection systems out there. I thought they were underselling the Rays then, so it's a good idea to double-check those projections ourselves.

For these calculations, I used the WAR calculator provided by data-hound Jason Hanselman and the Rest of the Season ZiPS projections found on FanGraphs. If I thought a projection was too pessimistic, I adjusted it slightly using my best judgement (e.g. Matt Joyce was projected to hit worse than last season, and James Shields was projected to post a 4.24 ERA). In general, I tried to remain true to the projections and erred on the side of optimism for the most part (as a foil to the pessimistic BPro). 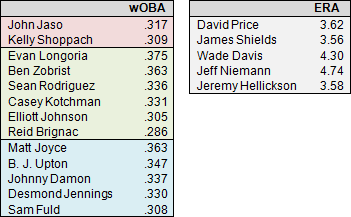 Overall, this does look fairly optimistic, yes? And yet when I calculated it all out in terms of WAR, these numbers still only had the Rays producing a .549 winning percentage going forward. If they played at this level from here on out, the Rays would win 88 games this season.

So depending how you look at it, the Rays' current roster appears to have a talent level somewhere between a .508 and .550 winning percentage. Is this good? Yeah, certainly. But is it enough to get the Rays into the playoffs? Most likely not, even if the Yankees' rotation implodes. The second place team in the AL East has only finished with fewer than 93 wins twice in the last 10 years, and the Yankees have the money and resources to fill any holes they develop as the season progresses.

Once you start to wrap your brain around the fact that the Rays are a big long shot for reaching the playoffs, all their current roster moves make a lot more sense. Why call up Alex Cobb to fill in for Andy Sonnanstine? The difference between 92 and 94 wins is huge and can have playoff ramifications, but what's the difference in finishing with 86 or 88 wins? The Rays simply don't need to scrape for every last win like they have in recent years, so they're not about to sacrifice prospect development on an increasing long shot at the playoffs. Why call up Desmond Jennings and risk him becoming a Super Two? Let him develop, and reap the rewards in future seasons when the Rays have a better chance.

Now, this isn't to say that we should all give up. I know I'm going to keep hoping the Rays can stay in first place and make a run for the playoffs; it's just I'm keeping my expectations in line and I'm not going to be surprised if that doesn't happen. The analyst in me is cautious, while the fan in me can't help but keep rooting hard.