Rating The Rays On The Basepaths

Share All sharing options for: Rating The Rays On The Basepaths

FanGraphs recently announced it's adding a new statistic -- Ultimate Base Running (UBR) -- which measures exactly what you'd think it measures: baserunning ability. Up until this point, there was only one statistic to use if you wanted to measure how good a player or team is on the bases -- Equivalent Base Running Run (EQBRR) from Baseball Prospectus -- so this provides us with another tool to use when trying to evaluate players.

I'm not going to get into the nitty gritty of the stat here; for that, check out Mitchel Lichtman's primer on UBR over at FanGraphs. But if you want a one sentence explanation, this stat measures how good a baserunner is at taking the extra base. It doesn't account for stolen bases, but is strictly focused on how good players are at all other aspects of baserunning: tagging up, taking the extra base, not getting thrown out, etc.

One of Joe Maddon's goals going into last season was to improve the Rays' baserunning and to make them a more aggressive team on the basepaths, so I figured it'd be fun to take a quick glance at how the Rays have done on the bases recently. Remember, like other stats at FanGraphs, UBR is measured in runs above average, so negative numbers are below average and positive numbers are above average.

Well then, it looks like the Rays took Joe Maddon's words to heart last season. Not only were they the best team in the majors last season on the basepaths, but they blew everyone else out of the water; they were over 10 runs better than the second best team. While most teams are only minimally impacted by their baserunning, the Rays gained around two wins last season from their prowess on the bases. Talk about the extra 2%...

After the jump, I'll list out how the Rays did on an individual basis for both last season and this current year.

And now the results so far this season: 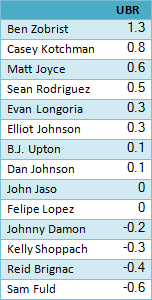 I've got to say, I'm surprised Sam Fuld is so far down this list -- for all his speed, he hasn't done well on the basepaths yet this year. He's also sporting a somewhat low success rate when stealing bases (70%, just at the break-even point), so maybe he doesn't have as good instincts on the bases as you'd expect. For what it's worth, Desmond Jennings was 0.2 runs above average on the bases during his very brief spell as a September call up last season.

But then again, these numbers probably hold very little predictive value; they tell us what has happened so far this year, but considering we're talking about very small samples in every case, it's unlikely that this data tells us all that much about a player's ability on the bases.

I will say one thing, though: between looking at stats from 2010 as well as the stats from this season, Ben Zobrist looks like he's pretty darn good on the bases. Chock that up as another thing Zorilla excels at.