Share All sharing options for: Updated Win Projections for the AL East

Earlier this week Steve Slowinski had a fantastic read looking at how the Rays should be expected to finish the year with 88 wins. Based on historic data this did not sound like enough to win the division, but with a bit more parity this year in the division it could turn out to not be a typical year. What was missing was a comparison to the other teams to see just where everyone stands. I used the same workbook that Steve used, but decided to strictly use the Rest of Season Zips projections for all players. You can argue the merit of how they are valuing individual players, but I think that overall it's a fine system for this sort of thing. Here's the team-wide totals for the components of WAR:

BR stands for Baserunning and Def stands for defense. Both of these are in runs for this table, but will be in wins for the rest of this, so please keep that in the back of your mind. The rest is pretty straight forward, but please feel free to ask questions. You can see that the Rays are projected to have a slightly above-average offense while leading the division in defense and baserunning leading to the third best positional player WAR. The Rays look to have the second best starters and relievers giving them the second best pitcher WAR going forward. Altogether, the Rays check in just behind the Yankees going forward, but a little over five WAR behind Boston for the division. The Red Sox look very strong, while the Yankees pitching looks to undo many of the gains provided by their offense. The Orioles and Blue Jays track very similarly though for different reasons.

We can apply the projected wins to what's already happened and get something like this:

You'll see in the team charts below that there is plenty of room for error so I would apply a generous range of +- 5 wins to the total. For instance, you would expect the Rays to win anywhere from 80-90 games. This might seem like a wide range, but it's encouraging that a best case for the bottom two and a worst case for the Rays still has them in third place. Meanwhile, if the Rays catch some breaks and end up with 90 wins and the Yankees struggle a bit and end up with only 84 or 85 then they'd be in solid contention for the Wild Card and perhaps even the Division.

Steve's thesis was that the Rays are currently on the outside looking in with lower odds than their well-funded, silver-spoon using rivals. I would agree with him here that the odds may not be as high, but you can see that there would be quite a few scenarios where the Rays do reach the promised land. This gives management quite the sticky wicket as loading up and falling short could cause issues down the road, while not making a move or selling off useful parts and then falling just short would be disheartening to an already Tinman-like fanbase. This is why they make the big bucks and they've shown great acumen in making this decision if you refer to the past four years. In 2009 the Rays were in a similar position of having a chance, albeit a low likelihood, of reaching playoff bucks, but they were able to bring in a haul of talent by making the prudent choice. I put full faith in the ability of our decision-makers to make the right move when that time comes, but I will echo the sentiments of the fans I know that are clamoring to see the fresh faces that are currently wrecking havoc in Durham.

The rest of this is just going to be the charts showing how we arrived at these final figures. In the interest of honesty I thought this would be valuable as you can see how we got these numbers, but also make some comparisons to see where our guys rank compared to their peers. 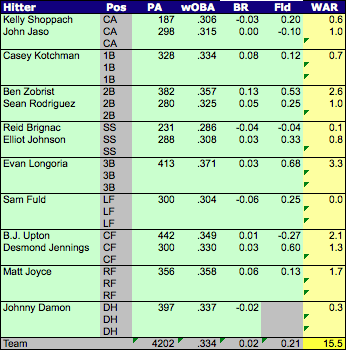 Remember, baserunning and defense are based on wins, not runs for the remainder of this. The wOBA numbers come from the projections and same with the Plate Appearances with a few tweaks here and there. Don't get caught up in guys that play multiple positions as I don't think it's a huge issue for this type of analysis.

The BR and Def numbers are based on what the player has done thus far. Nothing scientific there, but these components have more to do with swaying the WAR than deciding it. 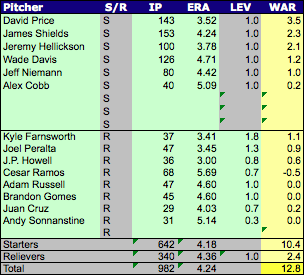 These are pretty straightforward so I won't linger. 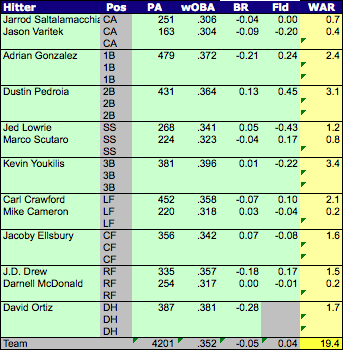 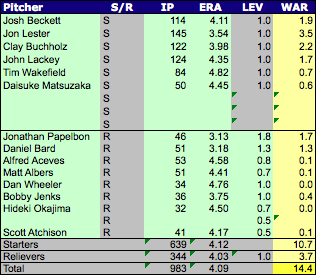 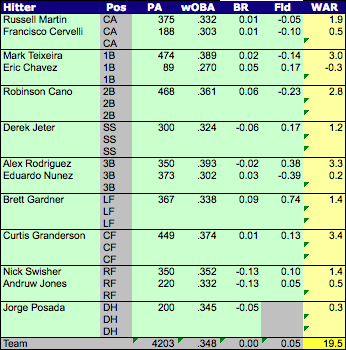 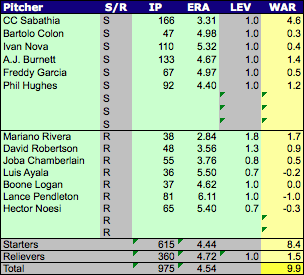 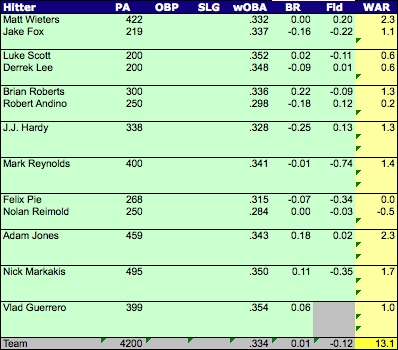 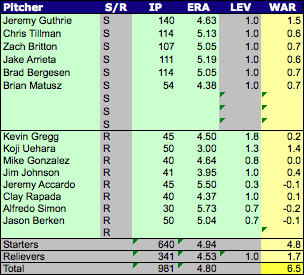 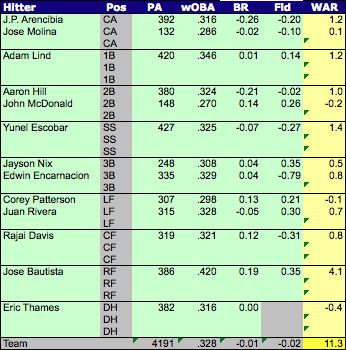 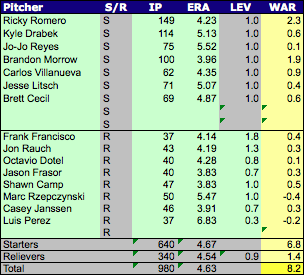