Share All sharing options for: A New Market Inefficiency

The Designated Hitter is one of those principles that is seemingly much better in theory than it in practice for most franchises in the American League.  In theory, American League clubs can replace their feeble-hitting pitchers with an additional potent bat that will help the offense be more efficient. The problem is, those big hitters are not always plentiful for some teams and not affordable for others. For every Edgar Martinez out there, a team ends up with Pat Burrell as the only guarantee a Designated Hitter gives a team is the right to choose not to put the pitcher in the batting order.

No Rays fan can forget the time Joe Maddon  unintentionally discarded that luxury with a lineup card mistake that had both Ben Zobrist and Evan Longoria at third base forcing Andy Sonnanstine to take his own hacks at the plate and Sonnanstine ended up going 1 for 3 with an RBI double while Pat Burrell sat on the bench wondering how that was done. Outside of that event, you have to travel back to Ken Brett (yes, George's brother) to find the last time a pitcher hit for himself in the American League for an entire game.

Power is the attribute most often associated with the DH role as visions of Frank Thomas, Jose Canseco, Steve Balboni, David Ortiz, Travis Hafner, and Jim Thome dance in our heads while Paul Molitor and Edgar Martinez stand and scoff from the other side of the spectrum. While power is the most desired attribute, it is the costliest one as well. Home runs add to the runs driven in total as well as the runs scored total with just one swing of the bat and those numbers jump off the page to an arbiter and even more so to a player agent attempting to siphon money out of a General Manager’s budget.

Over the past three seasons, there have been 42 different players in the American League that have had at least 350 plate appearances in a single season as their team’s primary DH and that group of players has pocketed $302.4 million dollars for their work. That collection of talent has accumulated just 47.6 wins above replacement while producing $205.1 million worth of open market production according to Fangraphs. This season, players with at least 50 plate appearances in the DH slot have produced a sum of just 7.2 wins above replacement, or $33.2M worth of production while collecting $44.3M of the $147.8M due them this year in salary.

Given the poor return on investment dollars invested in the position bring, is it time for the financially-prudent Rays to treat the designated hitter roster spot as they have the bullpen in recent years?

The designated hitter spot throughout Tampa Bay franchise history has been missing an s in the title, outside of Jose Canseco. Canseco may have been on horse hormones, but he remains the best hitter to fill the role in franchise history. The collection of names that have served as the primary designated hitter for the Devil Rays and now Rays have produced just 2.9 wins above replacement while raking in $38.5M in salary. If you remove Canseco from the equation, the group has produced -1.2 wins above replacement while being paid $33M. If you have ever wanted to visualize what flushing money down a toilet would look like, that's exactly what it would look like.

The Rays are not alone in wasting money on designated hitters; thankfully most of that wasted money came in the Naimoli/Lamar era but here is the type of production the American League has seem from designated hitters that have at least 350 plate appearances in that role in a given season. 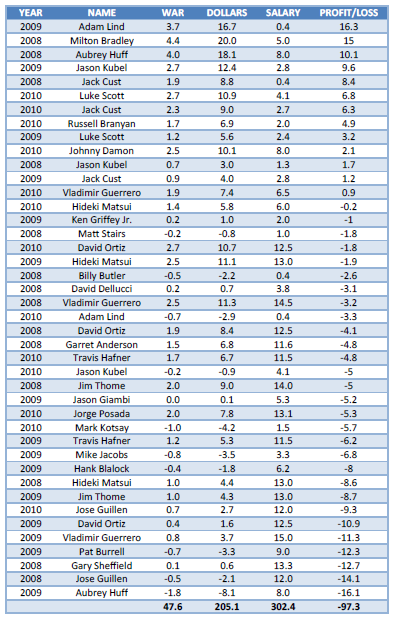 Just 13 of the 42 players represented on the table above turned a profit for their team while working as a designated hitter. Paying a lot of money for a DH does not mean that team cannot turn a profit with that player. After all, Johnny Damon turned a profit on the $8M Detroit gave him last season while Aubrey Huff handed the Orioles a loss while he made that same salary in 2009. However, the premium power bats have cost teams significant dollar figures and those investments have not turned the kind of profit other positions have.

The San Diego Padres have written the book on how to efficiently build bullpens without going out on the open market and unnecessarily spending top dollar on relief talent. They have built their bullpen over the past few years mostly through in-system development and shrewd acquisitions but not by giving set-up men multi-year deals as the Astros, Dodgers, and Yankees have most recently done. The Rays have also done this to both extremes as they signed the worst collection possible in 2007 while mining gold since with pitchers such as Joaquin Benoit, Randy Choate, Grant Balfour, J.P. Howell, Joel Peralta, and Kyle Farnsworth. Yet, there has not been a team to take the leap of faith and try to build the DH role from within.

Each organization has at least someone on their depth chart that a scouts say has the bat but there are concerns about where that player can play in the field.  Chris Carter (take your pick), Brandon Allen, Jesus Montero, Eric Thames,  Kila Kaaihue, Wily Mo Pena, and Clint Robinson are all names that come to mind that could serve in the DH role and help teams now rather than spending time on the bench or even in AAA because of roster issues at the big league level. Robinson in particular would be a model case for this experiment for a team and some team giving him a shot would at least stop Jason Hanselman from uttering Robinson's name as often as Rush Limbaugh says Ronald Reagan's name on one of his shows.

Robinson was just a 25th round draft pick by the Royals in the 2007 draft due to concerns about his ability to play the field but his numbers continue to improve as he climbs the organizational ladder. Last season, he won the Texas League triple crown and has taken that success to the Pacific Coast League where he is currently hitting .349/.434/.616 in 198 plate appearances with 25 walks and 32 strikeouts giving him a .340/.414/.626 slash line over his last 737 plate appearances. The first base role at the big league level is going to be locked up by Eric Hosmer for the foreseeable future and the DH role belongs to Billy Butler thanks to the new contract the Royals gave him this past off-season. The organization still has Ka’aihue in the fold meaning Robinson has quite a crowd of players to fight through in order to find at bats for the Royals.

Robinson may never be more than a bench player at the major league level, but it is unlikely he will get the chance to showcase that as a member of the Royals because the only two spots on the roster he can fill will not be available any time soon. Rather than spend another $7M+ on an aging bat at a lineup spot that has shown a rather disappointing rate of return on the money invested, I would like to see a General Manager buck that trend and give a young bat such as Robinson a chance to fill the role that scouts say he and others like him are destined to fill. The franchise has wasted enough money on players that has been unproductive year after year while there are players all throughout the minor leagues that are in the minors because their glove does not fit anywhere in the field. The free agent path has not been a successful one for the Rays making it time to find another way to attempt to turn a roster advantage into a true advantage rather than a source of disappointing to frustrating production.