Share All sharing options for: Open Q&A on FIP and Evaluating Pitchers

In my piece for this week's St. Pete Times, I get a little bit more statistical than I have at any point yet, talking about the theory behind evaluating pitchers. I even introduce the readers to Fielding Independent Pitching (FIP), so yeah, it's an aggressive week. I fully expect there to be plenty of people with questions and feedback, so consider this an open thread for any and all questions relating to the article, evaluating pitchers, FIP, Wade Davis, whatever. I won't be around every minute of the day, but I'll drop by as often as I can to answer questions.

Below the jump, I'll list some of the more common questions that I expect people to have, and I'll answer them to the best of my ability.

If you're a regular DRB user and would like to help answer some questions, please feel free to join in. If this sort of thing isn't your cup of tea, I'd recommend pretending this thread doesn't exist.

So wait, you're telling me pitchers don't have much control over if balls hit against them go for hits or outs? That doesn't feel right.

I know, this is one of the toughest concepts for people to accept, as it's very counterintuitive. It feels like dominant pitchers should be better at limiting hits than league average pitchers, but the difference between these pitchers is a lot closer than you'd think. Consider: 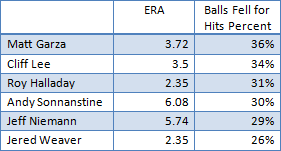 These are numbers from this season - remember, league average is normally around 29-31%. While I've only selected a handful of pitchers here, the point is merely to show that pitchers of any quality can have a wide range of results when balls are hit in play against them. Andy Sonnanstine can allow a league-average amount of balls to fall for hits, while pitchers like Cliff Lee and Matt Garza can do much worse. Balls falling for hits has little to do with the skill of the pitcher, but depends in large part on the defense behind him and where exactly the batters hit the ball.

Not I said "...little to do with the skill of the pitcher". We can't totally discount the fact that some pitchers are simply really, really good and are therefore more likely to limit hits against them, while some pitchers are really, really bad and are more likely to have batters rip hard hit balls off them. Greg Maddux and Pedro Martinez finished their careers with around 28% of the balls against them falling for hits, while if you were to throw a Triple-A scrub up there on the mound, they'd be likely to have more balls fall for hits against them than the major league average.

And as always, you have to use your best judgement. If a pitcher is missing with his location and having pitches ripped against him for hits, that's not a player getting unlucky on balls in play: that's just bad pitching. But if a pitcher is hitting his spots and simply having hits reach the gap or bloop in, you might want to consider that he's having some bad luck with balls in play.

What's this about homeruns? You seemed a bit wishy-washy in the article on how much control pitcher's have over homeruns allowed.

The short answer is that yes, pitchers obviously have control over their homeruns allowed. No fielders are influencing the results of a homerun: it's simply the pitcher and the batter, and the batter wins. So when we're looking at statistics to use in FIP - "Fielding Independent Pitching" - then yes, we want to use homeruns in our calculations.

But, there is one big factors that can influence if a pitcher is likely to allow many homeruns or not: ballpark. Some parks are noticeably more pitcher or batter friendly, and pitching in PETCO Park versus Coors Field can significantly alter a pitcher's homeruns allowed and ERA.

Also, pitchers have their homeruns allowed totals vary from year to year, and just because a pitcher allowed lots of homeruns in one year doesn't mean they'll do so in the future. If you want to predict how a pitcher will perform in the future in allowing homeruns, your best bet is to take his career homeruns per flyball rate (HR/FB%) and use that as your estimate. League average for this is around 10%, while some pitchers have career rates above this (e.g. James Shields, 11.6%) and some have career rates below that (e.g. Matt Cain, 7.0%).

So what's you're telling me is that FIP is better than ERA?

No, I'm not trying to make any value judgments here. ERA and FIP are both useful, but neither should be used strictly by themselves; evaluating pitchers is a difficult thing to do, and the more stats you look at, the more complete a picture you'll get. ERA only captures one snapshot of a pitcher - the runs allowed side - while FIP captures a different snapshot - the defense-independent angle. You're only limiting yourself if you choose to look at only one or the other.

I will say this though: FIP is better at ERA when it comes to predicting the future. If you want to get an idea of how a pitcher will perform down the road, then you want to strip out all the noise and look at the skills a pitcher has the most control over. ERA is good for look backward, looking at how pitcher's have performed thus far, while FIP is good for looking forward.

For more information on these stats and concepts, check out the FanGraphs Library. Or else just ask a question below.