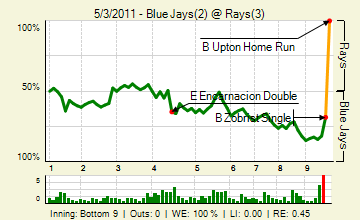 Kind of a frustrating game as the Rays were putting a bunch of balls in the air all game. One culprit was B.J. Upton who had two deepish fly balls in his first two at bats. His last one he got all of it, however, and hit himself a nice little walk off dinger. We only (I know, only) had five Ks on the night with one walk, but I was more concerned with the lack of hard contact. Our first run was a bloop single by Kelly Shoppach that drove in Sean Rodriguez from second. Longo's timing looked off in his first start in a month, but I think that's to be expected.

Wade Davis pitched in and out of trouble, but managed to give the team six innings of two-run ball. He was relieved by the spawn of Bartlett as Brandon Gomes came in and immediately showed that he wasn't here to screw around by brushing back the fearsome John McDonald. He went on to get all six batters he'd face with a twist. He was clearly pitching carefully, and eventually around, Adam Lind. Lind went on to be thrown out easily trying to pilfer second. He was followed by Cesar Ramos who got a fly and a K in his only work. Adam Russell was also warming up. It would have been interesting to see all three get into Gomes's debut, but Professor Farnsworth was called on to get the last out.  He did after a deep double by the one they call E5. Nice work by the pen tonight.

Pretty boring, quick game, but a win is a win. Also, congrats to the Lightning for going up 3-0 in their series.