Matt Joyce Takes No Prisoners and Asks For No Quarter

Share All sharing options for: Matt Joyce Takes No Prisoners and Asks For No Quarter

Matt Joyce is good at three things. Fighting, screwing, and hitting holy hell out of baseballs. The byproduct of the Edwin Jackson trade has finally earned the right to play everyday for the first time in his career. He's hitting so well that it doesn't make sense at this point to at least see what he can do against lefties as well. Surface level analysis shows a guy that has put up a slash line of .365/.425/.623 good for a wOBA of .450 that places him second in the AL and third in all of MLB. Add in that he's walking 10% of the time and only striking out around 18% of his plate appearances while having favorable luck on balls in play and bit more on ones over the wall and you have what amounts to the best bat over the first two months of the season for the Rays.

I wanted to take a look at his Pitch F/x data to see if anything stood out to why he was off to such a great start and see if this is something that we can look forward to over the rest of the season. First off, here is a breakdown of which pitches he's seeing and some of the results of those pitches:

For simplicity I have lumped all fastballs, cutters, sinkers, etc... together as fastballs. Additionally, this includes both lefties and righties as he has far less pitches from same-handers thus far. He's getting a fastball a little over half the time with change ups the next most likely and then the two breaking balls coming in pretty closely. He swings most at the change and least at the curveball while falling in between on the fastball and slider. When he does take, he's rarely seeing the curveball come in for a strike as 89% are ruled a ball. The fastball is the pitch he takes for a strike the most but it's pretty close to the breaking balls. When he swings he puts the fastball in play the best while whiffing the least. The slider is the opposite as he puts it in play less than a third of the time he swings while missing it completely close to 40% of the time. The curve and change are very similar when it comes to putting the ball in play or whiffing. When he does manage to put the slider in play he's absolutely crushing it getting basically a single every time he puts a slider between the chalk. The curveball has the lowest wOBAcon while the fastball and change are two other pitches that he attacks really well.

To see his pitch results over a strike zone please refer to this: 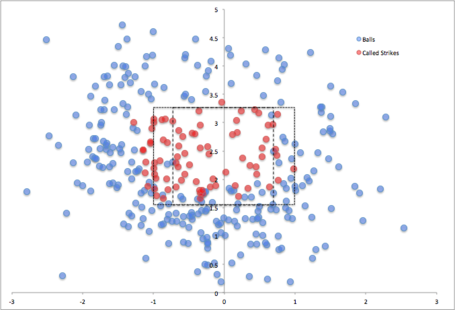 The larger box on the outside refers to what is called the Wide Zone which runs from one foot on either side of the center of the plate and tends to account nicely for the varying lateral strike zone of most Major League umpires. The smaller box contained within looks at the "by the book" strike zone. What I really love about this, as well as in the upcoming chart, is to look at the empty space just as ponderously as I do the filled areas. Not too many pitches in the dead center of the zone getting taken while you can see plenty of balls beneath the zone that look like tasty pitches that he was able to stay off of.

This does a nice job of showing where pitchers are pitching to him and what he's more likely to take. The densities away and down look very thick with pitches while you don't see too many takes to the inside of his strike zone. He appears to be getting jobbed a bit on pitches in the wide zone away from him which would make most guys have to expand the zone a bit and go out there. I like seeing him take those pitches as there's not much he can do with them as long as there is less than two strikes. Moving on to whether his swings are getting put in play or ending up as swinging strikes: 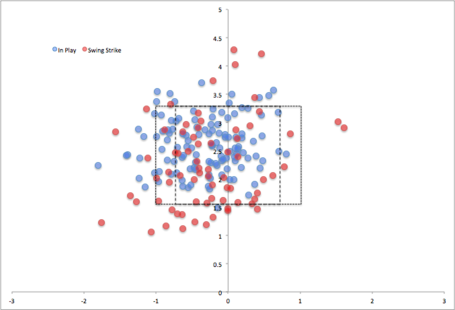 You can see that Joyce has been swinging at a disproportionate amount of pitches middle and away as pitchers try to keep the ball in off his hands. Another thing that stands out to me is the large number of swings and misses down and away in the zone on what are most likely change ups or breaking balls from lefties. He's not making much contact on pitches near the very bottom of the zone as he appears to like the ball up a little higher. There are very few swinging strikes on the inner half of the plate, especially middle and up, while out over the plate and away he's showing a more even split of balls in play and whiffs.

What we can do with the above picture is to break it down into buckets based on the coordinates of the pitch. We can make the above strike zone look like this: 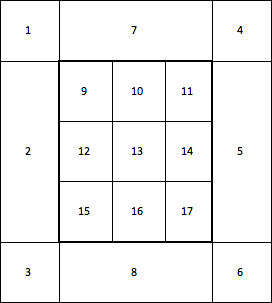 The thick black border indicates the edges of the rule book strike zone, while the outer zones show pitches that are off the plate. Corresponding with this is the following table that shows some summary numbers for each zone:

Briefly, we see pitches in both raw number as well as percentage and the same with total number of swings and the percent of pitches that ended in a swing. Moving to the right we see the number of in play and swinging strikes in the raw form as well as per swing. The same can be said for the Line Drive, Ground Ball, and Fly Ball raw numbers, though the denominator for those percentages is based on balls in play. Moving along we can see the balls in play and which base Joyce ended up on if it turned out to be a hit. Lastly, we have our old friend wOBAcon as well as a calculated BABIP. The xBABIP is a little reference that multiplies each of the batted ball types (LD, GB, FB) by the AL-wide BABIP rate to see what his batting average would be if he ran like the typical American Leaguer. I thought this would provide a nice comparison to what his BABIP rates have actually looked like.

If you don't like the idea of looking from the table to the legend I have plotted most of these numbers into a mock strike zone that you may (or may not) find more convenient: 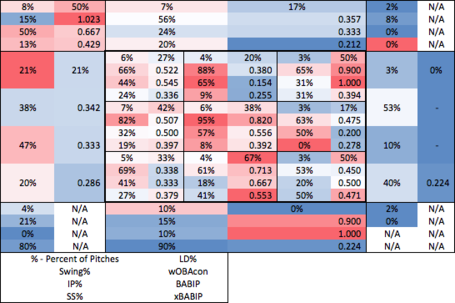 Again we see that he's seen more pitches away. You can add up the % of pitches to get 18% on the outside of the zone, 14% down the middle, and only 9% inside, feel free to try different angles here to get a numerical idea of where he's being pitched. What's really exciting to me is those middle-middle numbers where he's swinging 95% of the time, only whiffing 8% of those swings while putting 57% of his hacks in play. Of those balls in play, a full 38% are going for line drives leading to a wOBAcon of .820 and an actual BABIP of .556. Talk about smoking pitches! One area that he likes, though isn't seeing very good results is over the middle and up. He's swinging at close to 90% of the pitches and putting two-thirds of those in play, but he's only garnered a .380 wOBAcon with very low actual and expected BABIP numbers. Nearly the opposite is over the middle and down as he's not putting many in play and whiffing a lot, but when it's between the lines it's falling in a lot with plenty of power.

I've tried to make a few different ways to look at this as everyone reads and learns differently, but am always looking for feedback on what you think works, and more importantly, what doesn't. There's a lot of stuff here, and now that you should have a good feel for what's being shown, I'd love to hear what stands out to you, the reader. I do think it's pretty impressive that Joyce is being pitched away, away, away, and is still seeing tremendous results. Pitchers are clearly afraid of what he can do on anything in the inner half, so hopefully we'll get to see him turn and burn on a few more of those.

Lastly, I've got some summary statistics as far as inside and out of the zone:

Everything is the same as above, but I find it astounding that Joyce is putting 34% of all his in zone swings on a line into the field. Couple that with high ground ball rates and low fly ball rates and it's easy to see why Joyce is carrying such an exaggerated BABIP at this point. For the most part, he stays off the pitches that are out of the zone, and when you come after him he can make you pay pretty hard. I think it's very safe to say that he won't continue to be this mosterish going forward, but you should not be surprised by what Matty Joyce has done to date nor expect him to fall off a mountain over the rest of the season.

Please get at me with questions in the comment thread if anything is unclear and I hope this can begin some dialogue about whether Joyce should be playing everyday and other Joyce related topics. All data current through 5/28/11

I've been trying to include sweet videos of things that make me happy so I figured I'd include this one thanks to someone reminding me that I saw them play this over the summer at a free show. Sadly JPJ was not sitting in: