Where Is the Home Cooking?

Share All sharing options for: Where Is the Home Cooking?

Last night's walk-off win by the Rays pushed them up to an 8-9 home record on the season which is well below the success Rays fans have come to know in recent years. Heading into the start of the season, the Rays and Red Sox were tied for the best home winning percentage in baseball since 2008 as both teams went 158-85 (.650), which is even more amazing when you consider the difference in dollar figures and turnstile accounts between the two teams. Yet, this season, here are the run totals for home games thus far: 1, 1, 1, 3, 1, 4, 5, 4, 2, 5, 2, 4, 2, 5, 2, 5, 3. At last count, not only have the Rays not scored more than five runs in a home game yet, they also have only had one game with more than seven hits and that came in the unfortunate loss on Sunday to the Angels. The question on everyone's mind: where is the home cooking? 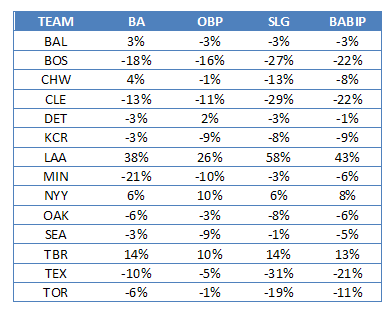 The Rays offense is better across the board when staying in hotels rather than the comforts of their own home, but they take a back seat to the team that just left town with a series win as the Angels are heavenly on the road but are having a devil of a time being productive when playing in Southern California. Notice how Toronto takes a bit of a hit on the road while Boston and Texas really see a drop in production thus far as they leave their cozy parks for more neutral parks on the road.

The club's best hitter at home has been Matt Joyce who owns a slash line of .404/.456/.654 in57 plate appearances thanks to a rather insane .475 BABIP while the pre-season projected three and four hitters for the team bring up the rear. Johnny Damon was excited about coming back to central Florida to play in front of friends and family, but his production at Tropicana Field thus far has been quite similar to the guy who was the opening day DH each of the past two seasons. 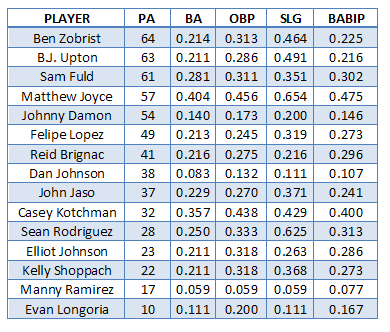 These things level out over the course of a full season, but the offensive woes at home are concerning thus far as the club has taken on a less potent identity at home to the one that they have showcased on the road thus far.