Fresh off one of his worst starts of the season against the Angels, David Price pitched one of his best against the Blue Jays today.  Price K'd 10 in 8.2 innings and allowed one unearned run on four hits and--most impressively--ZERO walks.  Yes, the man brought his fastball control today throwing the two and four-seam fastball for 99 of his 118 pitches.  The two-seam averaged 94.04 MPH and topped out at 96.1.

Price worked mostly low and away to righties and found great success blowing high fastballs by the Jays hitters.  He K'd Rajai Davis, Corey Patterson, Yunel Escobar, and Edwin Encarnacion two times a piece, but, unfortunately, couldn't get any of them to hat-trick.  He didn't waste any time getting those K's either.  Unlike last night, where Rays pitchers didn't record a strikeout until the 25th out, Price struck out the side in the first in 1-2-3 fashion.

The "real story" took place in the ninth and surprisingly didn't involve head a-hole umpire, Joe West.  After a Sean Rodriguez error allowed John McDonald on base to start the inning, Price induced a fly out and an RBI ground out when Joe Maddon walked out to remove him from the game.  Price had thrown 118 pitches, but never appeared to be struggling.  To put it politely, Price was effing pissed.  He very clearly expressed some four-letter-words as he handed the ball over and walked off the mound and in the postgame interview he was rather nonplussed about his manager's decision.  Oh, in case you were wondering, Kyle Farnsworth allowed a hit to Escobar, but Retired Adam Lind on a grounder to first to close out the game.  And as I've said before , You Put in Farnsworth, you win the game.

But, on the other hand, I completely understand why Price was upset.  Firstly, no pitcher wants to leave the game, especially when he's dominating as thoroughly as Price was.  Despite being marginally better on a statistical level, a CG is special.  It's a journey, a metaphor for life, a simple declaration of purpose in an existence where there are so many questions and too few answers.  Hyperbole aside, I can't think of anyone who doesn't laud the complete game.  So, in the end, when it comes to my feelings on Joe Maddon pulling Price one out away from a CG:  I dont like it, but gosh darnit, I respect it.

A little sour in his post game interview with Leader of the Church of Raymondo, Todd Kalas, Price mused briefly about the added pressure facing this Blue Jays line up due to his 8-0 record against them.  Not every day do you hear a player show his human side and express doubt over the unreasonable expectations of fans.

In other, non-David Price related news, the Rays offense scored runs today.  Three to be exact.  And they all came in the third inning.  How cute is that?

Sean Rodriguez and John Jaso started off the inning with their favorite In-N-Out burger to score the Rays first run (double, double if you've never spent time on the left coast).  Tiny-Spartan-Warrior Sam Fuld would continue his absolutely understandable offensive performance and fly out to right.  After Ben Zobirst walked to put men on the corners, Johnny Damon hit a perfect swinging bunt down the third base line to plate Jaso.  I'm not convinced that he didn't do it on purpose with how much Maddon likes to call the safety squeeze in that situation.  What a pro.  Oh, yeah, Matt Joyce had a Sac Fly to score Zobrist and give the Rays the 3-0 lead.

Though really, couldn't the Rays have scored five runs?  I mean, it would have been mighty fun to make some Cinco de Mayo puns today.  Now I get stuck having to make a Blue Jays pun with 'blue means sad' as the punchline.  Oh well, too bad.  In case you were wondering when the next Cinco de Mayo is, the upcoming dates can be found here. I guess the only thing to do is post this oldie-but-goodie of Jonny Gomes.  Oh, the good 'ol days. 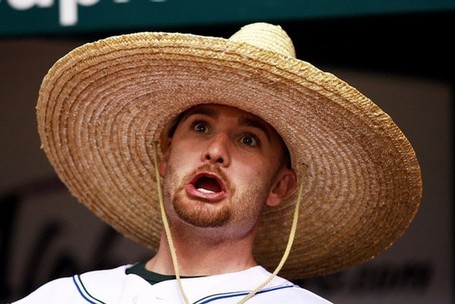