What To Expect From Brandon Guyer

Share All sharing options for: What To Expect From Brandon Guyer 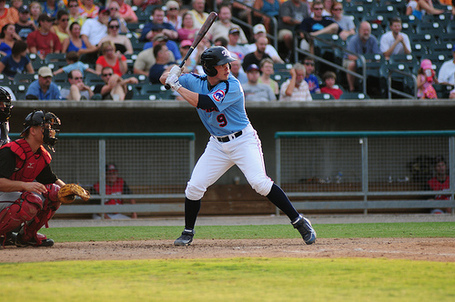 I wanted to make a quick post that tied a couple of things together regarding Brandon Guyer. We can use his park-adjusted minor league numbers against lefties and righties to get an idea of how much of a platoon split Mr. Guyer is likely to demonstrate. Even better, we can run a bit of regression on these numbers so that we're sure that what we're seeing is not just one player in a small sample. Lastly, we can apply forecasts to the regressed splits and get an idea of what to expect from this most recent call up.

First off, we can extract all the data we need from here, which yields something like this:

The database leaves out 2007 for the former Cub that came over in the Garza deal, but it wasn't a full season and it was his first so I'm not all that worried. His 2010 season at Tennessee was lauded as a breakout, but his season prior, albeit at Advanced A Daytona, he had himself quite the season as well. You can see that he was slow to adjust in his first go around at AA, but it appears the 25 year old was able to bury that bad run by doing everything possible in 2010. I don't have the splits for his 2011 season in Durham, but I can share that his overall line against both types of pitchers is at .370/.427/.630 good for a wOBA OF .457 and six homers in 112 plate appearances. The only thing hotter than that is Alison Brie playing the part of a paint-balling gunslinger. It's not all rosy as he's walking around 7.1% of the time while striking out roughly 22.3% of the time. He looks to be going up there hacking and confidence beget confidence in this case because he's seeing good results. The strikeouts might be something to keep an eye on as he takes his first run at the best pitchers on the planet. 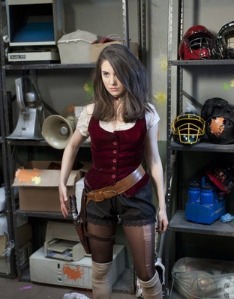 I've found the OLIVER Forecasts at The Hardball Times to be a really good resource for guys that have little to no time in the Show. They're not flawless, but they seem to give a solid benchmark of what you're likely to see from a player if he were to get called up. OLIVER has Guyer's OBP/SLG/wOBA projection at .345/.479/.348.  Pretty impressive for a guy that has yet to pop his call-up cherry. I'd like to contrast this with ZIPS which is a little more pessimistic on Guyer and with good reason.  The ZIPS projection looks like: .306/.395/.313. I want to take the average of these as they seem to be optimistic and pessimistic, respectively, and each has roughly the same number of plate appearances. The average yields a line of  .326 for OBP, .437 for SLG, and .331 for wOBA. That's an above-average player, especially in this time of regressed offense.

With a solid forecasted baseline we can now regress the Minor League, park-adjusted numbers to get an idea of how he will hit lefties and righties. Keep in mind that what he's done so far, particularly against lefties, is a pretty small sample. This means we're going to see regression take hold of the data and pull it closer to the mean than you might think. It's important to remember that what he's done so far might label him as a lefty-masher, but it could just be a couple of extremely hot streaks have carried him. This is why regression is so important as it lends a truer view of the data. With this in mind we would expect Guyer to do this:

This does tend to show a guy that we can expect to rock lefties. A LF platoon of Guyer and Sam Fuld could be extremely interesting depending on what defensive value Guyer gives us. What's really interesting is that most Rays fans think the team really struggles with lefties. Looking at our OBP/SLG/wOBA of .322/.374/.313 seems to confirm this until you see that versus righties those numbers go to .295/.389/.302. Guyer should help us against lefties, but it's still going to take some regression from Reid Brignac, Dan Johnson, and John Jaso to get this offense back where it needs to be. For now, welcome to the club Brandon. I hope your transition is smooth and we only talk about good things for the next six years.