Offense Continues to Shine On Road

Share All sharing options for: Offense Continues to Shine On Road

The Orioles and Rays opened the season with one another and the Orioles left town with a sweep in dominating fashion and their chins held high. Orioles fans had an extra spring in their step, and life was good as the four-letter networks fawned over Buck Showalter and how he was making a huge difference with the Orioles. Fast forward to five weeks later where the Orioles have gone 11-18 since leaving St. Petersburg in early April and the Rays continue to be the hottest team in baseball playing .750 baseball over their last 24 games as they dominated the Orioles 8-2 today. The team has had its struggles scoring at home, but they have had little offensive troubles on the road in 2011 which is a great thing considering 22 of the next 33 games  for the Rays are on the road.

Coming into this game, Jeremy Hellickson enjoyed the good fortune of getting 9.3 runs support during games in which he pitched and today was no different as the Rays gave him seven runs of support as he struggled through five innings. Whether it was the extra rest or a late night or a rough night of sleep in the team hotel, Hellickson was far from his normally sharp self today. Hellickson threw 92 pitches on the day, but only 49 of them for strikes. He allowed eight base runners which included five walks as he struggled with his location throughout the entire start. 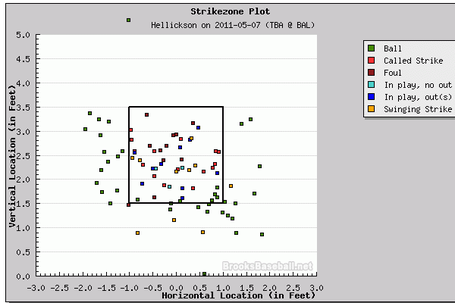 As you can see from the pitch plot, Hellickson was missing quite a bit up off the right side of the plate and down low and it did not help that home plate umpire Tim Timmons was not a fan of calling strikes low and away where Hellickson typically lives with his curveball. Despite putting on eight baserunners on in just five innings, none of them scored as the Orioles continued their trend of giving Jeremy Guthrie poor run support as the Orioles were just 1-12 with runners in scoring position today. Rays pitching held the heart of their lineup to a 0 for 11 day with three strikeouts of Derrek Lee.

Offensively, the two coldest hitters on the team each went 0 for 5 as Sam Fuld has now hit .050 in his last 40 at bats and Brignac is still searching for that first extra base hit of the season. He did have one hard smash to right field but hit it too close to Nick Markakis. Camden Yards has typically been a place where Brignac has found a lot of success and it is the place where he hit his first major league home run so run to your bookie and lay down a bet as the Cajun Sensation is going to break the spell tomorrow against Brad Bergesen. Ben Zobrist tried to become just the fifth batter in franchise history to record five hits in a game but fell short with a strikeout in the 9th inning while Evan Longoria drove in his first run of the season with an early double and them crushed an inside fastball from Guthrie into the seats in left-field for his first home run of the season.  The other offensive star of the day was Casey Kotchman who continued his charmed life getting on base four times today with a hit to each field: left field, right field, and the infield.

Earlier today, it was announced that B.J. Upton would be suspended two games for telling Chad Fairchild just how much he sucks at his job, which required a lot of profanity and demonstration. In all fairness to Upton, Fairchild's performance that night was atrocious but I guess when you spend so much time around Joe West and Angel Hernandez, osmosis is bound to happen and their suck has no doubt infected Fairchild. Upton said he plans on contesting it, but then said he was going to serve the suspension in Cleveland. After the game, he told reporters he decided to do the suspension in Cleveland as he loves hitting in Camden Yards and his three extra base hits including a home run confirm that. We can safely assume that Brandon Guyer will be available for the Cleveland series and Sonnanstine warming up in the 8th tonight could mean that Joe Maddon will skip his start on Tuesday in favor of using the top three pitchers in the rotation against the red-hot Cleveland Indians.

For a nice read to the other side of this equation, go see our friends over at Camden Chat but before you go, I leave you with this image from today's broadcast: 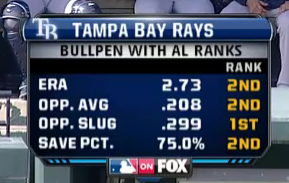