How Rays Pitchers Have Fared With Two Strikes on the Batter

Share All sharing options for: How Rays Pitchers Have Fared With Two Strikes on the Batter

Intuitively, it makes a ton of sense that you would expect many good outcomes when a pitcher has two strikes on a batter. In fact if you don't get to two strikes you'll never get to send guys packing back to the dugout, but just as important as the dugout destination is the journey taken upon getting two strikes on a batter. Some pitchers have a put away pitch that they can rely on to rack up the siddowns, while other guys don't have that go to and have to get by on trickeration. This post will take an early look at what Rays pitchers are doing once they've got a batter buried to see who is an Alpha and which guys are about to feel Darwin's icy grip on their throat.

First off, let's use some data from B-Ref to see the results that our pitchers are seeing on all batters faced with two-strike counts: 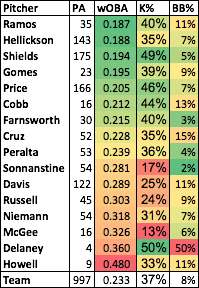 The plate appearance number show how many times a pitcher has had any type of two-strike count on a batter. As you can see these are very small samples for many of our pitchers so please keep small sample size caveats in mind here. Also, this data is from the first week of June so it does miss an outing or two from many of these guys including Cobb's nice start against the Angels that could have beefed his sample up a bit more. wOBA shows the weighted On Base Average against in this scenario with K% and BB% showing the likelihood of these situations ending in a strikeout or walk, respectively. The discerning reader will note that 1-(K%+BB%) gives a good idea of how many of these counts end up with a ball in play.

You can spot some of the things you find interesting, but I'm going to restrict my points to just the larger sample guys:

One of the frustrating things to see is when a pitcher has a batter on the ropes, but the batter continues to foul off close pitches and take balls. Anecdotally, this seems to be the case with Davis, but we can take a deeper look using the

Pitch F/x database hosted by Joe Lefkowitz. Any given pitch will either be taken and called a ball or a strike or swung upon and end up in play, foul, or as a swinging strike. Here we can take a look at what outcomes each pitcher is seeing: 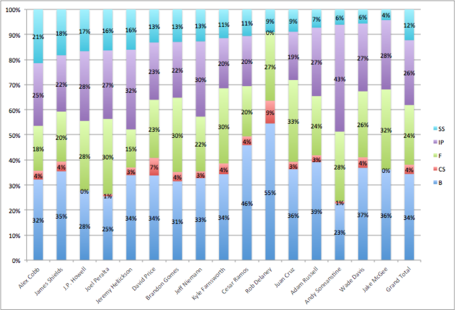 I have ordered these left-to-right by swinging strike%. Each percentage is based on the number of pitches thrown. Cobb checks in as the lone guy getting over 20% whiffs in this count while throwing less balls than the team average and much less foul balls. Shields is among the best at limiting his balls in play while racking up swing and called strikes quite well. We saw that J.P. Howell had a very high wOBA in an extremely small sample, but he's third on the team in swinging strike% and garnering a swing on 72% of all his pitches thrown with two strikes. Hellickson is doing a great job of limiting foul balls with most of his swing getting put in play or whiffed on. Bear in mind that a batter putting a ball in play is not the worst thing in the world provided it's weak contact which we are seeing for the most part looking at his wOBA against.

Second from the bottom (yes trailing Andy Sonnanstine) is Big Wade Davis who is only drawing a swing on 59% of his two-strike counts. Of the regulars, he's throwing a ball at a higher clip while getting only around 6% whiffs and giving up balls in play and fouled off at a higher than team average. This sounds like a guy that has been quite nibbley around the zone when he has the batter right where he wants him and he should be going into attack mode. It could also be that this is when he goes to a breaking ball that ends up out of the zone and batters just aren't biting his bait. Let's take a look at the pitch types: 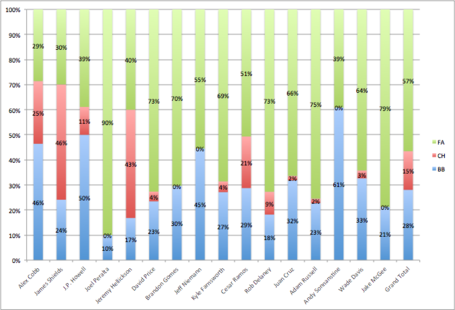 Ideally, we would like a see a pitcher mixing up his fastball, change, and breaking ball as even a devastating pitch can be sat on if it becomes predictable. An example of this is Shields going to his outstanding change just shy of half the time while still mixing in his fastball and breaking ball 30% and 24% of the time, respectively. You can see that Hellickson is similar with a few more fastballs and the expense of his breaking ball. Price brings a ton of that good fastball, but he'll still mix in a wrinkle from time to time just to keep batters from sitting dead red. Wade Davis profiles similarly, but it's not like he's bringing it at 95+ from the left side. He's a guy that's really hurt by the fact that his change has yet to develop. Batters pretty much know they're either getting a low to mid 90's fastball or a breaking ball that will most likely end up out of the zone. I really like Cesar Ramos's pitch mix as well as he does a good job of throwing each pitch enough to keep hitters off-balance while not forgetting about his fastball.

I have no personal agenda here, but it does seem that a guy like Wade Davis (who is our #4 pitcher working in his sophomore year I would be reticent to leave out) has some things that he can continue to work on including getting that change to at least show me status and throwing his breaking balls for strikes when ahead of the batter. I'd also like to point out that those who think Andy Sonnanstine has a place on this team need to stop letting your heart cook your brain because we all like the guy as a human, but it appears that he's just not an answer at the Major League level anymore. Kudos to Shields, Hellickson, and Price for being beasts and an emerging Cobb that we would love to see continued success from.