The Rays were shut out for the fourth time this season last night, and the second time by the Orioles. At 40 percent of the way through the 2011 season, that would put them on pace to match the 2010 Rays that were shut out 10 times in 2010, including four times in their final seven games last season. If you include this season's 63 games played, that means the Rays have now been shut out in eight of their last 70 baseball games.

A common theme during this season so far is to look back and reminisce about last year's division-winning offense that was the third-highest scoring offense in the league while lamenting over the current offense that is just the ninth-highest scoring team in the American League. Hahmann has a piece coming out on Monday that laser-focuses on the walk and strikeout rates of this year's team compared to last year's team, so I am filling in the gaps and looking at everything else in order to see just how different the 2011 Rays are from last season.

Before looking into the numbers, it is important to understand that offense is down in the American League as a whole. This season, the league average for runs per game is 4.3, which is down from 4.5 last season. This is due to the fact home run rates, hit rates, BABIP, slugging percentages, and batting averages are all in a continual decline as baseball transitions out of its enhanced era. That helps put the 2011 numbers into perspective, but it does not help make the 2011 offense any easier to watch at times. Without further delay, the table below presents the breakdown of the 2010 Rays and the 2011 Rays through June 10th, in both seasons. 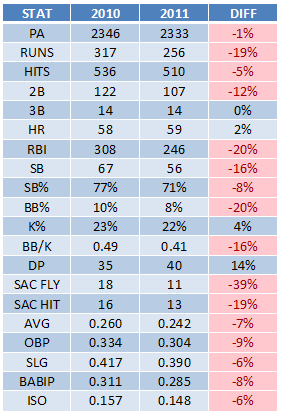 The fact the Rays have nearly identical triple and home run totals is probably the biggest surprise on this chart because the extra base hits have appeared to come less frequently to the naked eye. Run production being down 19 percent can partially be written off to declining offense all across the American League, but it can also be blamed on the small-ball portions of the Rays' offense this season.

This season, the Rays have ten less sacrifice instances than they did in 2010 at this point and their stolen base success rate is down as well. This is a team that thrived off being better on base-stealing and executing situational hitting to move runners into scoring position or to bring them home. Filling these types of margins allowed last year's team to be more successful than other teams despite the lack of traditional power hitters in the middle of the lineup. This year's team suffers that problem even more so as Joe Maddon has attempted to mix and match the three, four, and five spots in the lineup. Maddon has utilized six different players in the third spot of the lineup, nine different players in the clean-up spot, and ten different players in the fifth spot in the lineup in a continual game of mix and match trying to find the best solution for producing runs on a given night.

The team's batting average on balls in play through June 10, 2010 was a hefty 311 last season as the team hit grounders at a 42 percent rate, line drives at a 19 percent rate, and fly balls at a 39 percent rate. This season, the team has a .285 BABIP while the types of balls in play are nearly identical as the Rays have a 44 percent grounball rate, an 18 percent line drive rate, and a 38 percent fly ball rate. The drop in BABIP is not as shocking when you consider the American League's total is just .287 this season after finishing 2010 at .295. One bit of encouraging news is that the Rays are once again leading the American League in Extra Bases Taken Percentage as 48 percent of base runners are advancing an extra base on singles and doubles, up from 45 percent last season and well above the American League average of 40 percent.

Again, Erik has a piece focusing specifically on the plate discipline issues of the 2011 Rays coming out on Monday, but the data shown in the table above speaks for itself. Last season, the complaint was that the Rays took too many walks, and this season the complaint is they do not take enough and that is why they are not scoring, Yet, if the Rays return to a more successful execution of the little things such as situational hitting and improved base running, the gap between last season's numbers and this season's numbers could be lessened.

Failing in this measure means the batter made an out without advancing the runner(s). Last season, the Rays were successful 34 percent of the time in doing this, which was two percentage points above the American League average. This season, the team has been successful just 30 percent of the time, which is three percentage points below the league average. The Rays are lacking traditional power in 2011 despite the emergence of Matt Joyce as a 20 home run threat. Manny Ramirez was brought in to give the lineup some legitimacy and he was gone as quickly as he appeared, and the combination of Evan Longoria missing 26 games and struggling in his return has further increased that pain point.
Perhaps the influx of athleticism that is likely to come from the mid-season promotions in the coming weeks can help the team improve in these areas as the Rays are going to need to get back to doing the little things better than the other teams to help make up for roster inefficiencies that the club is dealing with this season.