Is there a more frustrating sight than watching a batter strike out looking? Unfortunately, B.J. Upton has garnered quite the reputation among Rays fans for doing just this -- and the "Beej strikeout face", where he disagrees with every call no matter where it is, doesn't help. I can remember instances where the pitch Upton took looked off the plate, but these probably stand out in my mind more because they are not the norm.

I think B.J. is a fantastic player that is a bit under-rated because his strikeout rate is always going to keep his batting average down, but he's capable of contributing in OBP/SLG and by playing a mean centerfield. For all these reasons, I thought it was high time we took a look at where his called third strikes have been (all data through 6/9/11): 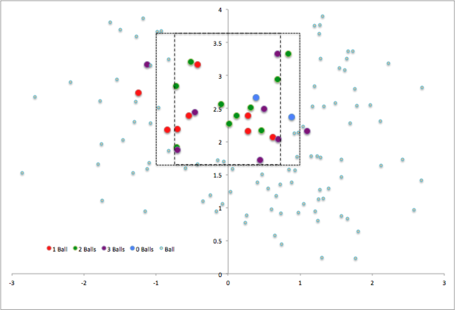 The smaller box is the rulebook defined strike zone, with the larger box showing what's traditionally thought of as "The Wide Zone", which varies depending on the umpire.

The large dots mark his called strike threes, with the different colors representing how many balls were in the count at the time. The small, faint marks represent called balls.

We can see that only three pitches were out of the wide zone, with two of those being called on a full count; the other was in a 1-2 count where you would expect B.J. to be up there protecting the plate. There are three more called strikes in the Wide Zone, with one each with one ball, two balls, and zero balls. I mention this because some people believe that on a 3-2 borderline pitch, you should take; you're going to walk if it's called a ball, and even if you swing and put it in play, you won't always get on. I won't delve into that, as it's beyond the scope of this, but some people think this way and we're not really seeing a ton of those pitches.

The other 22 pitches are within the rulebook zone, even if several of them are on the paint. That said, there are a few "cookies" in there, and you can really see a cluster on the outer-half middle and down. It really makes you wonder what's going on with those pitches, as they're clearly in the zone. It's not like Upton is used to getting most of these calls, as there are only a few balls in the wide zone and only a couple more in the rulebook zone.

If you're frustrated by Beej leaving the bat on his shoulder before trudging back to the dugout, know that you aren't alone. Hopefully he begins to show more aggressiveness with two strikes, but at this point I wouldn't count on it.