It's no secret that Evan Longoria has been struggling a tad offensively this season. If you look at his season line, it's not what we expected going into the year: .244/.358/.430, good for a .788 OPS and a .348 wOBA. This line isn't as bad as you might think -- what with the depressed scoring environment this year, it's still 23% better than league average -- but if he finished the year like this, it would still be his worst offensive season yet.

Before you start freaking out, though, take these two things into consideration: a) Longo only has 160 plate appearances this year due to his injury, so his performance is bound to bounce up as he gets more playing time; and b) despite his offensive struggles, Longoria is still rated by WAR as our third-most valuable position player. His offense hasn't been bad -- just low for him -- and his defense has been as superb as always. If we're frustrated with him, it's simply because he's spoiled us in the past.

And when you look at Longoria's numbers for this season, it becomes clear that his perceived "struggles" this season really come down to a recent slump. Back in May, Longoria had a .861 OPS and .375 wOBA, and he slugged 4 homeruns and 13 total extra base hits. He's fallen into a slump in June, though, hitting only two extra base hits all month and posting a .309 wOBA. There are actually some encouraging signs from his performance thus far this season -- his walk rate is up to 13% and he's striking out in less than 20% of his at bats -- so once he comes out of his slump, his season numbers will bounce up and we'll have our superstar all the way back.

Two questions, though. Hasn't Longoria struggled around this time each of the last few years? And what do we make of his home run totals?

Over the past two seasons, Longoria has notoriously been a fast starter, busting out of the gate incredibly hot and then cooling off toward the middle of the season. Take a look at the trends: 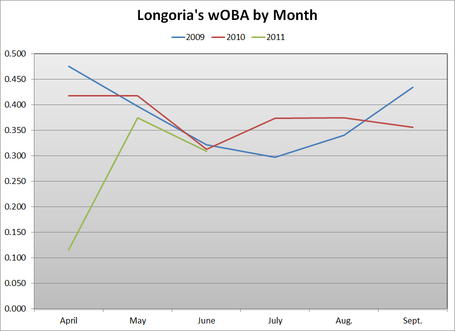 * Keep in mind that Longo had all of 6 plate appearances in April this year.

Does this mean anything at all? Eh, probably not. Monthly splits are not predictive in any sense of the world, as you're dealing with small samples in each case and there are plenty of confounding variables that can influence how a player performs in a given month (matchups, injuries, etc.). For instance, if I'd included 2008 on the chart above, you'd see that this trend is only limited to the past two years, so please take it with a very fine grain of salt.

I merely find it interesting that Longoria is so far following a similar trend this year as in past years. For whatever reason, June has been his kryptonite over the last few years, and it seems to have come back and bit him again this year. He's surely bound to improve over the coming months, but I'm going to keep half an eye on his splits to see if he follows any trend from the past few years. Even though it doesn't mean anything analytically, it's still fun to watch.

Power numbers take a very long time to stabilize -- nearly an entire season -- so I'm trying not to put undue weight on his ISO and SLG from this season yet. BUT, I don't think it's a stretch to say that to this point, Longoria hasn't developed into the sort of hitter that many of us were expecting. When he broke onto the scene in 2008 at the tender age of 22 years old, he looked like he had many 40 homerun seasons in his future. Since that season, though, all his power numbers have slowly declined: his home run totals, slugging percentage, isolated power, and his home run per flyball rate. While he's actually hitting more extra base hits now than every before, he's turned into a doubles-machine instead of a home run monster.

Is this necessarily a problem? Analytically, I have to say "no". Longoria is still incredibly valuable on offense, and he's become a very balanced hitter: he hits for average, slashes extra base hits around the field, has good plate discipline, and steals some bases. Power has been down around the league, and Longoria has simply gotten more and more valuable on offense over the past few years (38% better than league average last year). As long as he's producing at this high a level, it seems really petty to nitpick and wish he had more home run power.

And yet....as a fan, I sometimes feel that way. It's tough not to, right? We all love the big home run hitters, and Longoria looked poised to become one of them when he burst into the league. How much more awesome would Longo be if he was mashing homerun along with doing everything else he's already doing? He'd become the best player in the major leagues, without a doubt.

Whenever I find myself thinking that, I remind myself that Longoria still has the potential to develop that power; players don't always follow a linear path of development like we hope and forecast, and as he nears his physical peak, Longo could start turning doubles into homeruns any year now. And regardless of if he ever does or not, he's still an incredibly valuable player and adds balance to the middle of our lineup.

So be patient with Longo. This slump is just that -- a slump.