Share All sharing options for: James Shields is God

Seriously, there are too many big stories from the game today. Some quick thoughts on the Rays' 2-1 win over the Marlins: 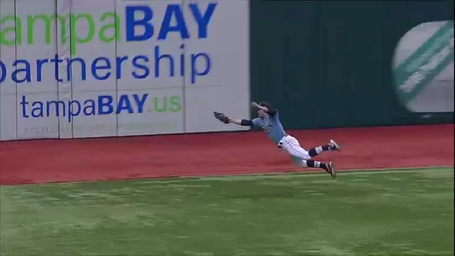 A few more thoughts on Shields after the jump.

One of the reasons that Shields has been so dominant this year is because he's had his full complement of pitches working. Not only has did he locate his change-up well yesterday, keeping them below the zone and generating 7 swinging strikes with them, but he was able to mix in his curveball just as often as his change. There were some times when Shields threw his curveball early in the count and at times the hitter surely wasn't expecting it, so having that other weapon really helps him keep hitters off-balance.

Shields also threw a handful of sliders and cutters yesterday -- or at least, what Pitch F/x has classified as a cutter. His cutters had similar movement to his slider, but didn't quite break as much horizontally and were nearly as fast as his fastball. I wasn't a huge fan of Shields' cutter last season, as it seemed to get hit hard a lot of the time, but if he can locate it well, I don't see why it couldn't be an effective pitch. More and more pitchers are succeeding with cutters these days, so Shields may continue to mix a cutter in every now and then.