The 'Matt Joyce For All-Star' Campaign

Share All sharing options for: The 'Matt Joyce For All-Star' Campaign

The first round of All-Star voting results were released yesterday, and of course, it's going to inspire some controversy. Based on the early returns, we should just rename the AL team the "All-Yankee Team", as six out of nine slots are led by Yankees (including the entire infield). As much as it pains me to admit it, though, those picks are mostly defensible; the Yanks do have a really good group in the infield, and there aren't too many other viable candidates yet this year. C'mon Longo - you can totally unseat A-Rod if you get hot.

But I digress: the real travesty in the voting is in the outfield: 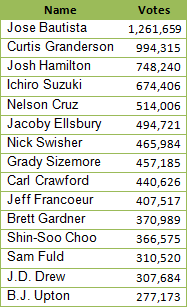 I recently ranted about this over at FanGraphs, so let me sum up my argument:

This is a player that is currently leading the major leagues in batting average (.370), has the best slugging percentage (.636) out of all players not named Bautista, and has the third-best on-base percentage in the AL (.430).

This player has posted a .457 wOBA and a 198 wRC+ this year, much higher than Curtis Granderson's 171 wRC+, and, according to WAR, he's been the third-most valuable player in the majors this year (3.1 WAR, trailing only Bautista and Halladay). And if you don't want to consider the fielding aspect of WAR, he's also been the second-most valuable hitter in the majors, contributing 20.4 offensive runs.

If you combine Joyce's stats over the last two seasons, he's been worth 4.8 WAR for the Rays in just under 450 plate appearances - not even a full season. His WAR figure ranks him 10th among all AL outfielders over the last two years, and that's considering that all the players above him have around 300-400 more plate appearances than he does. Over that time, his .400 wOBA is third-best among all AL outfielders.

Listen Rays fans, I love you, but why are you voting for Sam Fuld? We all had a lot of fun with the #Legend thing earlier this year, but the love-fest should be over now. He's hitting .229/.281/.351 for a .632 OPS, while Joyce has a 1.042 OPS this year -- third-best in the majors behind Jose Bautista and Lance Berkman.

If there's one local player we should be going ga-ga about right now, it's Joyce. He's been an absolute monster so far this year -- arguably the best offensive player in the AL outside Jose Bautista -- and he deserves a lot more support in the All-Star voting.

I know the All-Star game doesn't count for much, and really, who cares who gets picked for the team? But the players care and they view it as an honor to be selected (or even considered), so shouldn't we honor Joyce for the work he's done this season? If not for him, the Rays wouldn't be sitting only 2.5 games out of the division right now -- not even close.

Matt Joyce has been an all-star player so far this year. Let's go out and give him the recognition he deserves.