With the Rays going back on the road to Milwaukee they're going to face stiff competition that has compiled an MLB-best .366 wOBA at home on their way to a 25-9 record. Previously, I touched on how well Milwaukee has played at home, but today we're going to go in depth to look at which of their batters are to be feared and why. All data is current through June 18th. Due to pitch classification issues I've broken pitches into three buckets of Breaking Ball (BB), Change Ups (CH), and Fastballs (FA). All batters over 50 plate appearances will be profiled.

First off, let's look at pitch selection for each batter to see how these gents have been handled so far: 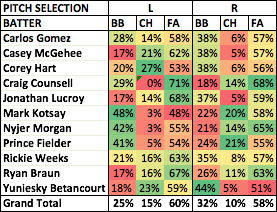 This shows process, but let's see some results using our old friend wOBAcon:

I think most people know that Braun, Fielder, and Weeks are very good hitters, but I think you can add Morgan and Hart in there as less heralded names that can really make you pay, though Hart does become much more normal against righties and Morgan has less of a defined split.

The last thing I want to touch on deals with plate discipline against the pitch types and contact ability when batters do swing. When you take a pitch it can either be called a ball or a strike, but a player with a great strike zone IQ is going to take more balls than strikes when he chooses not to swing, but the real savants are those that are taking correctly over 70% of the time. Balls per take are labeled B% and called strikes per take are labeled as CS%. On the other hand, when a batter does swing he will either put the ball in play (a good outcome), foul it off (pretty neutral, though two strike foul balls aren't the worst thing), or collect a swing strike or whiff (a bad outcome). Here's all batters versus lefty pitchers:

Focusing on the totals we see that Cory Hart, he of prodigious power, whiffs a ton versus lefties while showing really strong zone recognition at the plate. You can look through these yourself, but I think they make a nice cheat sheet to use as a reference during the game when one of these guys is coming up. Here's the look versus right-handers:

And here's the total versus both types of pitchers: 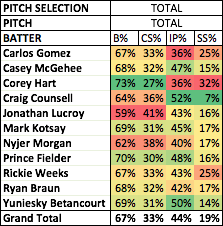 The Brewers bring a few guys that can really swing the lumber, but luckily the Rays have even better stuff than this to look at these enemy combatants I just hope that you, the reader, will find this very useful to see which batters can hurt our pitchers and how they go about doing that. You can download the entirety of the workbook here. It may be useful to see the raw totals that I think are important, but I chose to leave out in the interest of brevity. It's a bit of a mess, but you should be able to pick your way through there.