Last week I took a look at the guys in Durham to see how their statistics stack up against the rest of the Eastern League. I lumped the batters and pitchers in to one post last time, and I don't think it did the guys justice because I didn't give enough love to some of the guys. This time, we'll take a different approach.

We'll start with the position players because I have a huge Beckham crush that I want to force down your throats. Once again will start with the raw stats. The below table shows the Triple Crown stats, slash-line components, wOBA, and a couple of other things. You should all be familiar with each of these numbers.

As you can see, the Biscuits offense has performed better than average so far on the year outpacing the league in OBP/SLG/OPS/wOBA. The offense is largely paced by non-prospects with minor league fodder Daniel Mayora and Nevin Ashley near the top and fringe prospects Kyeong Kang and Steven Vogt really doing work. Looking at more than just the raw numbers gives us some good indicators on the other guys.

Below you'll see a table with K% and UIBB% (this time out of PAs because I couldn't reconcile why some cites use ABs) followed by Isolated Slugging (a measure of how much of your slugging is due to more than just singles). The final 5 statistics are measures for comparing each stat to the league average. For these 5 (that end with a "+"), 100 is equal to league average and anything greater is better by that percent. 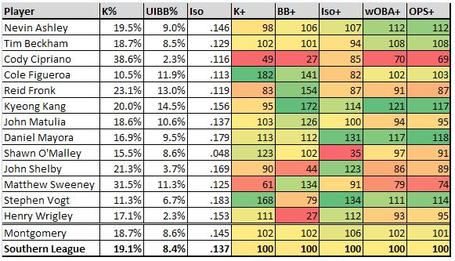 I'll add some quick bullets for things that stand out to me:

-As I said I have a huge prospect crush on Beckham. I have since we drafted him 1:1 overall because of the reviews on his tools and work ethic (the Barry Larkin comps didn't hurt either). He struggled a bit his first two years, and his star seriously faded (dropping out of all top 100 lists prior to this year). If you looked closely at his numbers, though, he was a shortstop who was young for his league hitting about league average. Not what one would expect from a number 1 pick, but he was considered quite raw. Many thought he might repeat A+ due to his struggles, but  the trade for Hak-Ju Le forced the Rays to promote him even if they hadn't planned to. Well, he hasn't been overmatched at all. Despite being one of the youngest players in the league he posted above-average lines in all 3 slash-categories. In every indicator above except Iso, he's been better than the league, and even his power output is showing improvement as he has as many homers this year in 66 games as he had the two previous full seasons (125 and 123 games respectively). As he grows in to his body and continues to refine his approach, his plus batspeed should turn even more of those doubles in to homers and singles in to doubles.

-Cole Figuero appears to have a phenomenal approach. The former shortstop now playing second base with a few other starts at 3B/SS has not hit for much power which isn't surprising given his past results. He has been great, though, at making contact and drawing walks. If he can add enough power to keep pitchers honest, then he could make quite the utility infielder. If not, he may still be a serviceable option in the Elliot Johnson mold.

-Matt Sweeney looks cooked. The youngest member of the Kazmir trade that once made Keith Law's top 100 prospects just can't seem to make contact. On top of that, his power is down. I've pretty much written him off at this point.

-Stephen Vogt and Kyeong Kang were mentioned above as fringe prospects. Both are really excelling at the plate so far on the year with seemingly different skillsets. Kang's more patient approach has netted him huge walk numbers to go with right around league average strike-out numbers, and Vogt's been a bit more aggressive with more contact ability. Vogt's really old for prospect status and he's limited to 1B/DH, so he needs to keep his power numbers excellent if he ever wants to see the bigs. Kang isn't quite as old, and he has a bit more defensive value as corner outfielder. Still though, he'll need his bat to continue to be great if he wants to keep the train rolling.