With a bit less than half the season played so far, I thought it was high time that we take a look at how our staff has been performing. On tap today is right-hander "Big Game" James Shields. Thus far he's lived up to that moniker posting an MLB fourth best ERA of 2.40 with an FIP/xFIP of 3.23/2.91, respectively, while throwing over 112 innings already. He's striking out 25% of all batters faced and walking just north of 6.5% of all batters discounting intentional walks and lumping in hit batters. He's giving up homers just shy of one per game, which is quite a bit below career averages, while his HR/FB (11.3%) is only a touch below his career norm (11.7%). His BABIP and LOB rates are a bit out of whack, so this is probably the absolute peak that we'll see out of Jamie this year, but let's take a look at how he's been doing what he does.

I wanted to focus on how Jamie is mixing his pitches this year. To do this we're going to look at his Breaking Ball (curves and sliders, BB), Change Up (CH), and Fastball (four-seamers, two-seamers, cutters, FA) broken out by his first 30 pitches in a game, his next 30 pitches, and then the rest of the game. We'll be looking at pitch location/mix and some results stuff using wOBAcon, Swing Strike rate, and a form of contact that looks at balls in play per swing.

First up, let's take a look at his pitch mix based on pitch number: 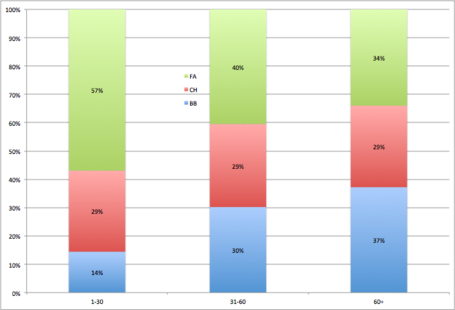 We can see that in the early going, James is pretty fastball heavy using it over half the time, but as the game goes on he continues to sub breaking balls in for fastballs. I find it incredibly interesting that Shields throws the change up essentially the exact same rate, regardless of how many pitches he's thrown. This makes me wonder how this changes as far as using each of these as a first pitch to batters: 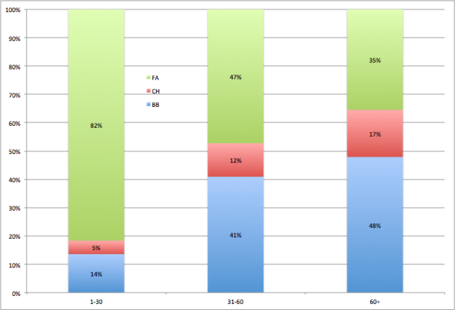 Here we can really get a nice look into what James does to start off a plate appearance. Over the first 30 pitches he's throwing just enough breaking balls that batters can't entirely sit on his fastball, but he continues to ramp up the off-speed and breaking stuff as the game goes along while throwing less and less fastballs.

Let's take a look at where he's throwing these pitches: 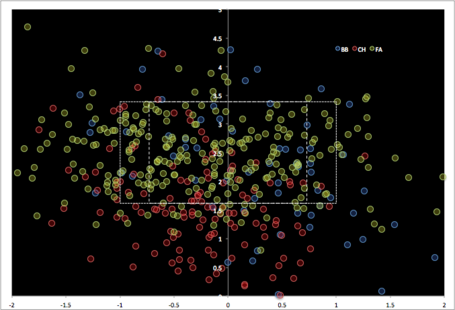 Here we can see a ton of changeups at the bottom or below the zone with all those fastballs all over the place. I really like the cluster of pitches up and in the wide zone to righties, but there's plenty of pitches that look pretty fat in the middle of that zone. 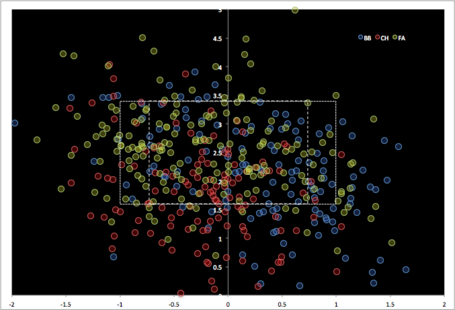 I absolutely love that he's throwing all those breaking balls away from righties and in on lefties. You can also see that he's throwing the change up a bit more in the zone. It appears that Jamie likes to throw the change less and out of the zone early as a chase pitch and after batters have seen it and get leery about swinging at it he starts to throw them in the zone more. Pounding the zone with fastballs and below it with change ups early then bringing in the breaking ball in and out of the zone and throwing the change for strikes is a great philosophy as batters that guess don't have a chance and those that don't aren't much better off. 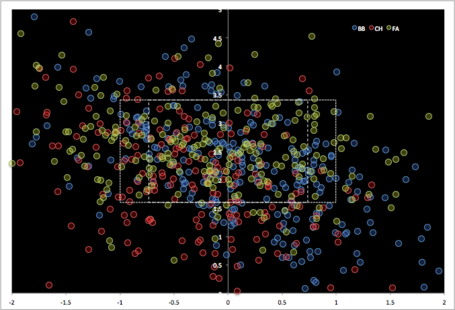 Recall that we're now seeing almost an even split between the three types of pitches as his fastball% is now down to 34% of all pitches. We're seeing more of the same except this is a larger sample due to containing more than just 30 pitches per start. I think this muddies the waters a bit and wouldn't draw many conclusions from this, but I do like to see where he's throwing his pitches. We can look at some data to give a bit more meaning to what's going on here:

wOBAcon uses the linear weights of .9 for a single, 1.24 for a double, 1.56 for a triple, and 1.95 for a home run with all of that numerator divided by the number of balls in play. My version of Swing Strike and Contact are swing strikes per swing and balls in play per swing, respectively. Fouls would be the third outcome, but they're mostly noise where we're trying to see if a batter is whiffing or putting the ball in play when he makes up his mind to swing.

We can see some of the affect of throwing more change ups in the zone that second time around as shown by the .598 woBAcon, easily his highest, but with that increased action comes him inducing a whiff on nearly half the swings against him. This actually seems to help his fastball play up quite a bit as there has been less hard contact against in the second set of fastballs. Overall, you can see his wOBAcon comes up throughout the game as batters start to get a better feel for his breaking ball (.371 wOBAcon while only 26% swing strike) later in the game. His fastball sees a similar decline in usefulness as late in the game batters are putting it in play over half their swings, while rarely whiffing, and hitting it hard when they do make contact. Still, those first couple of times through the order he has been extremely good at limiting hard contact and getting batters to swing and miss at a ton of pitches.

What are your thoughts related to this or something you've seen from watching him put on a clinic every fifth day this year?