Share All sharing options for: Rays 2011: Where's the Buzz?

As the Rays near the halfway point of the season they are only 3.5 games behind the Red Sox, 3 games behind the Yankees, and are tied for the sixth best record in the major leagues. Normally, there is an energetic buzz about a team that has accomplished what the Rays have, but this season the buzz is more of a din. Has the average fan been so turned off by the pairing of payroll and the loss of name brand players that the interest has decelerated to the point of apathy? Is this apathetic viewpoint fueled by a belief that the Rays are just not good enough to compete with the mighty Red Sox and Yankees? Is there a hangover effect from the offseason losses that cause the average fan to be overly apprehensive about forging a relationship with the 2011 Rays because they feel the team will trade away any of the players they are familiar with to pare payroll and collect more prospects?

The first thought I had was whether or not this lack of a buzz was in my head or if it was justified. As I was preparing to write this story penned by Steve Berthiaume on ESPN.com titled "Rays Need to Get Out of Tampa Bay" was released.  As much as the article pained me, the front page picture annoyed me, and the title of the story served its purpose by needling me, the factual content of the story affirmed my belief. As noted by Berthiaume:

The Rays are currently last in the AL in attendance, averaging 18,485 fans per game, the second-worst attendance average in baseball, ahead of only the Marlins. That’s a drop of more than 5,000 fans per game from 2010. Rays viewership on Sun Sports, as reported by Tampa Bay Online last month, was down 34 percent and on average had dropped by about 30,000 households in the Tampa Bay area through the same point last year, according to Nielsen figures.

Another enthusiasm grabbing force that the Rays may soon have to deal with is the labor accord in the NFL which will spawn an all out blitz of free agency signings, trades, and opening of training camps.  The window for the Rays to catch the average fan's attention may be closing very soon. So as the season approaches the midway point, do we know how good this Rays team can be and can the Rays recapture the buzz they had in 2010?

Here at DRB there is always a buzz surrounding the Rays and after a light night of MLB action today seems like a perfect day to have a Friday free for all where I encourage discussion of any Rays topic that you'd like to discuss. After the jump I've put a few thoughts on the offense, the pitching, and whether the Rays are going to be buyers or sellers at the deadline.

As documented in several of the Monday Morning Recaps, the Rays have had trouble scoring runs.  Although the team has a record of 41-34, the offense has struggled mightily. The Rays are 10th in the league in runs per game (4.11), 12th in batting average (.242), 11th in OBP (.310), and 10th in SLG% (.388), and 8th in HR (68). The Rays offense has also been held to 3 runs or less 36 out of 75 games(48%) this year while posting a record of 9-27 in those games. The Rays are 12-9 in the month of June and the offense has had its outbursts but its also had its inconsistency as they have scored three runs or less in 9 of the 21 games including being shut out 4 times.  Given the aforementioned results, I suggest that improving the offense is the key to improving the Rays playoff chances as the year continues moving forward. As shown in the table below, the Rays have posted a winning record while three of the more important cogs of the Rays lineup, Matt Joyce, Evan Longoria, and B.J. Upton have all struggled. The table below was generated by Baseballmusings.com day by day database and represents the Rays statistics in the month of June. 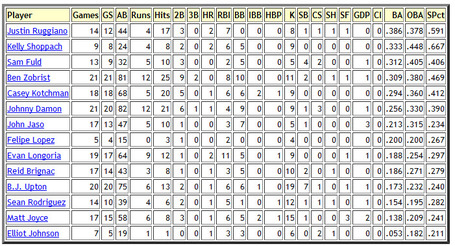 Barring any unknown injuries to Matt Joyce (speaking of the severity of the injury) and Evan Longoria or a sudden oft-rumored trade of B.J. Upton, I expect the trio to pick up their game and begin to hit at a level more in-line with what was expected going into the season. Their are other reasons for optimism as Kelly Shoppach has began to hit the ball with authority and is not trying to pull everything in sight, Sam Fuld seems to have his legs back beneath him and is showing that his true value is in a part-time roll, and Justin Ruggiano is making it hard to believe that Desmond Jennings or Brandon Guyer could have provided more offense than he has this season. And of course, any conversation about quality performance thus far has to mention Casey Kotchman who has put up a career season thus far even though how long it will last has been a continuing debate since seemingly mid-April. On the other side of the coin, John Jaso continues to struggle at the plate and Reid Brignac outside of a handful of at-bats continues to look dreadful at the plate.

There are lingering questions surrounding the Rays offense. Is Matt Joyce's shoulder injury as simple as pain management or is it affecting his swing more than we'd like to think? Has anyone else noticed a slight hobble in Evan Longoria's gait over the last few weeks? Is he battling some sort of quad injury like he suffered last year (pure conjecture on my part)? Should Reid Brignac be sent to AAA for a month or so to attempt to retool his swing? This notion was considered slightly absurd about a month ago, but consider that for all middle infielders with at least 100 PA, Brignac has the worst OPS at .440, second is Alberto Gonzalez of the Padres at .494, and third is Jack Wilson of the Mariners at .522.

There are also be questions surrounding the Rays starting rotation and bullpen. Can Wade Davis gather himself and become more of the pitcher he was in 2010? Can Jeff Niemann put the 2nd half of 2010 and first half of 2011 behind and become as effective as he was in the first half of 2010? Will J.P. Howell be able to find his rhythm that he had prior to his shoulder surgery? Can Adam Russell stop walking hitters long enough to gain some momentum in the bullpen? Is there a reason that Andy Sonnanstine is on this roster and if he were to be replaced who would it be?

Even with the questions surrounding the starting pitching and bullpen, the offense is still the area that seems to hold the Rays team back the most. If the offense doesn't come around in the next few weeks will the Rays become sellers at the deadline? On the other hand, if the offense does come to life will the Rays be buyers at the deadline? What does the front office feel is close enough to warrant becoming buyers and what is considered too far away to the front office to consider becoming sellers?

If the Rays become sellers will they look to move James Shields? Jeff Niemann? B.J. Upton? Kyle Farnsworth? Johnny Damon? Two players on this list seem to be attractive trade candidates regardless if the Rays are in the position of being labeled s buyers or sellers and that is Jeff Niemann and B.J. Upton.  Niemann, as Jason Hanselman has suggested, can be this years version of the 2009 Scott Kazmir and a trade of B.J. Upton could be seen as positive for fiscal reasons as well as having Desmond Jennings ready and waiting in Durham.

If the Rays become buyers, what position will be targeted and who are the most notable players that may be available? If the Rays were buyers and Joe Maddon was told by the front office that they could get him a bat or a bullpen arm but not both, what would Maddon choose?

The Red Sox have been very hot for well over a month and currently have the majors best record in baseball at 44-30 and their offense for the better part of a month has been clicking on all cylinders. The Red Sox continue to post victory after victory even after losing Daisuke Matsuzaka for the season, Bobby Jenks and John Lackey spending time on the DL and being ineffective when active, and Carl Crawford having a miserable season. Now Clay Buchholz is on the disabled list joining Carl Crawford.  Even with all the injury and poor performance issues, the Red Sox seemed to have already been crowned the AL East Champion.  Of course, it is hard for me to argue that they will not win the division as CoolStandings.com has their chance of winning the AL East at 48.3%, but isn't it possible that these injuries could catch up to the Red Sox as the year goes on?

The Yankees have had their own injury problems, losing Joba Chamberlain for the season and most likely Rafael Soriano for a large chunk if not the remainder of the season. Phil Hughes has only  made three starts this year and the Yankees hope to have him back after the All-Star break but nothing is certain as he has only made one rehab start to date. Yet, the Yankees have used a bruising offense and  surprising seasons from Bartolo Colon and Freddy Garcia. Will Father Time catch up to Colon and Garcia as the year grinds along? Or will Father Time set his sights on Alex Rodriguez and Derek Jeter? As the season enters the hot summer months are we looking at a NY vs Boston battle for the division where the loser gets the wild card?  Coolstandings.com has the Yankees odds at winning the AL East at 46.6%.  What percent chance does Coolstandins.com give the Rays, who are a 1/2 game behind the mighty Yankees, at winning the AL East? How about 4.4%, I say phooey to that! Go Rays!!!