This is a collaborative, three-part series by the writing team here at DRaysBay, looking at the Rays stadium debate in-depth. Part one addresses a possible stadium location, part two addresses a potential facility, and part three addresses possible funding avenues.

Not that we do not enjoy the view of the back walls in Tropicana Field, but how sweet would that view look as you watch the Rays play? For the last three years, there has been a lot more said than done regarding a potential new home for the Tampa Bay Rays as ownership, politicians, and members of the business community walk the fine line of political correctness and emotional understanding of the dynamics of the bay-area. Those parties have, for the most part, remained publicly silent and have allowed national pundits to fill the space with repetitive talking points about the club's attendance woes and how baseball cannot work in our market while sitting in ivory towers found in Bristol, Manhattan, Los Angeles, and places in between.

As Michael J. Fox's character Lewis Rothschild said in The American President, "People want leadership...and in the absence of genuine leadership, they'll listen to anyone who steps up to the microphone. They want leadership. They're so thirsty for it they'll crawl through the desert toward a mirage (such as a baseball stadium in Las Vegas), and when they discover there's no water, they'll drink the sand."

In the absence of leadership on this much-needed discussion regarding the Rays stadium, we present our proposal for both the location and design for the next home of the Tampa Bay Rays.

If that view is not familiar to you, it is a view of downtown Tampa while standing in Julian B. Lane Waterfront park near the University of Tampa. Why that location? 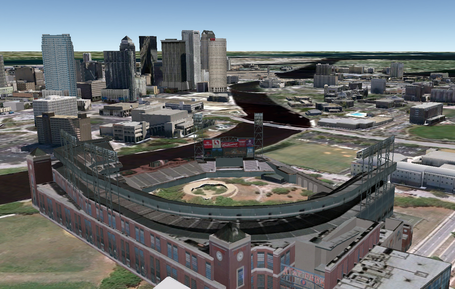 The Oakland Tribune wrote a piece in 2002 that examined economic growth in communities as it related to new ballpark construction. In it, they found that, "if a ballpark is part of a larger economic revival effort, it can spur or quicken the pace of other commercial development and housing." Tampa has already seen some of this happening in Channelside and is hoping to continue the area's expansion along the riverfront area.The master plan for the Riverwalk offers many exciting improvements to a central part of the bay-area community that will further help make it a place people want to come to throughout the year.
We believe that the addition of a baseball stadium would further enhance the appeal of the area as well as strategically take advantage of its population density. Ballparks in Denver and San Diego followed this model when their new parks were being planned and the areas around both parks have expanded and flourished as a result.
The downtown San Diego area was revitalized when Petco Park was built as it saw many new residential buildings as well as restaurants and shops built up around it as they team ceased playing in Jack Murphy Stadium which was far from downtown and isolated to interstates rather than the public transportation options available to Padres fans today. Petco was constructed in the East Village neighborhood of San Diego, an area that did not have a great reputation prior to the stadium construction. Within three years of Petco's opening, $4.3B in residential and commercial development including 8,300 residential units, 1,100 hotel rooms, and 3,600 parking spaces was either planned, underway, or completed within the East Village area.
Likewise, Denver has seen its "LoDo" area grow in much the same way once the Rockies moved off the location off I-25 on the fringes of the downtown area and become a vital part of the downtown entertainment for Denver-area citizens. Between 1993 and 1996, Denver witnessed the number of restaurants in the area increase by 140 percent and approximately 3,000 new housing units were developed between 1995 and 2002. An additional 5,700 residential housing units were planned and the 0.1 percent sales tax that was implemented to help pay off the 20-year bonds that paid for the stadium generated enough money that the bonds were paid off in under ten years.
The construction of Tropicana Field alone was proof that the "build it and they will come" model alone is not enough to draw baseball fans into the park on a nightly basis. If anything, it is proof that parks need to be close to population centers or methods of transportation in order to be successful.
The ABC Coalition published data in its study in early 2010 using data from the 2000 Census from other similar sized markets as well as different areas of Pinellas County. The data that compared Tampa Bay to other similar baseball communities was rather startling.

The study found that as of 2000, just 19 percent of the area's population lived within a thirty minute drive of Tropicana Field. That 30 minute drive assumes a regular volume of traffic and not the utopia that exists on area roads at 3:30 in the morning when one can make it from Tropicana Field to Ybor City with ease. To further the visualization of what this looks like, staff writer Jason Hanselman constructed this image that shows the land areas that fall within five and ten miles of Tropicana Field. 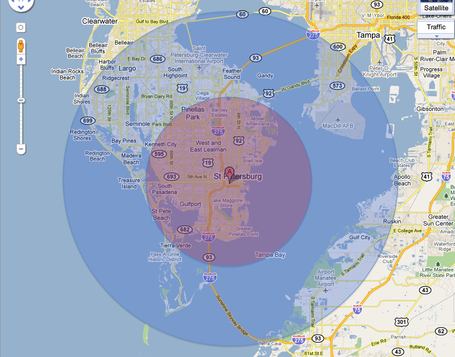 Nearly half of the population within a five mile radius breathes through gills while most of population within ten miles of Tropicana Field does the same.
Much was made of how many fans attended the three games in Milwaukee earlier this week when the Rays played there but the 2000 census data shows how unfair that kind of comparison is. Despite the fact the Milwaukee population is much smaller, nearly four times more people live within 30 minutes of Miller Park. However, if we put a stadium in the proposed spot, notice how the data changes.

Again, that data represents the 2000 Census data and does not reflect the housing boom that downtown Tampa experienced this past decade which still shows an 85 percent occupancy rate as recently as last month. Shifting the stadium location to our proposed point changes the five/ten mile range factor to this: 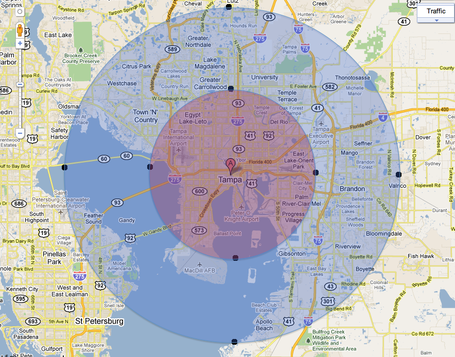 The map now included much more landmass than the current location allows for and gets the stadium close to major area traffic arteries such as I-75, I-275, the Crosstown Expressway, as well as US-92. This location also moves 21 miles closer to the Orlando market, which is currently the 19th largest television market in the country. Combining the sizes of the Tampa/St. Pete television market (13th) and the Orlando area market would give the area one of the eight largest television markets in the country and the kind of data necessary to get a regional sports network project up and running as franchises such as New York, Boston, and Texas currently enjoy.
Admittedly, traffic in the area is already problematic during rush hour, but infrastructure changes tend to follow stadium construction in the area so we cannot assume the roads and situations that exist today will be there in our proposed five-year model. As for how the area can handle a stadium, consider the current land use, parking, and transportation factors in the area.
LAND USE 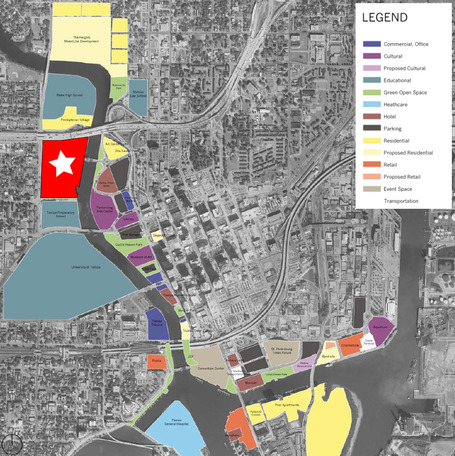 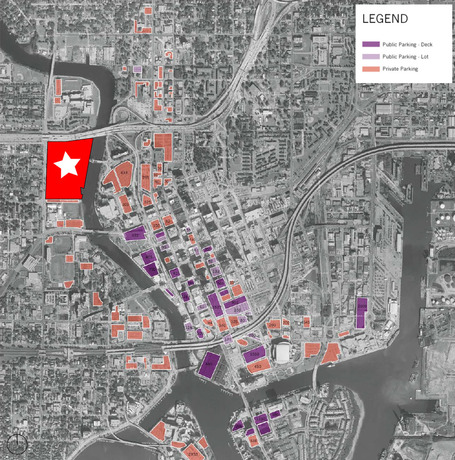 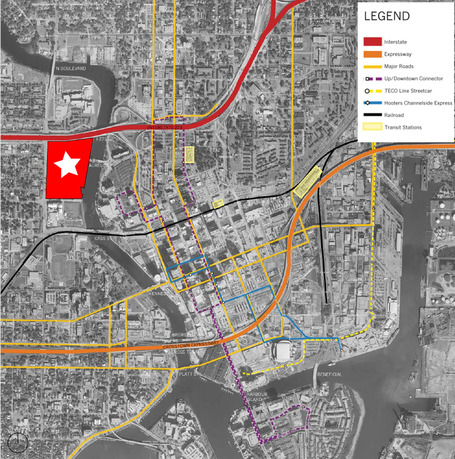 The proposed location currently lacks parking options adjacent to the property, but offers plentiful parking options within the immediate area affords several avenues for fans to use to get to the area and move within the proposed area to get to the ballpark, even by boat for those that can afford the use of personal watercrafts or should the two sides of the bay work together to use ferries to move fans from the piers in St. Petersburg over the water to the riverfront area.

The land itself is owned by the city and thus the sale price is a bit easier to negotiate. Consider that Orlando had public land after the closure of the Naval Training Center in Orlando a number of years ago and negotiated an extremely favorable sales price to a developer that built the thriving Baldwin Park community near downtown Orlando that is one of the most desirable areas in Orlando for potential residents.

We are not real estate developers, city planners, or lawyers, but we are concerned fans that are worried that continual non-action on this issue will lead to the Rays ceasing to exist in the are. Some of us grew up with the Rays while others adopted the team after moving into the area or becoming disenfranchised with other teams. We are frustrated with the lack of action on this issue by all parties and wish to see the leadership in the bay area as well as Rays' ownership to work together on this for the common good of the area population.

If the parties involved can come to a common understanding on where to build a stadium, then they can begin the discussions on how to pay for it and what type of stadium can be built. Coming to a consensus on a stadium location would be the first concrete action for the parties involved since the failed attempt at building the sailpark on the current site of Al Lang Field. If this, and the pending physical stadium proposal on Monday push the public discussion on this issue forward, it will have been worth the time and effort put into it as well as the critiques some are certain to express.