Rays BABIP and wOBAcon Against Since 2003

Share All sharing options for: Rays BABIP and wOBAcon Against Since 2003

Most here are familiar with BABIP for both pitchers and fielders, but we can also use it as a proxy for defense. Mr. Maddon tweeted in early May:

One of our mottos is "we catch line drives." The sophistication of putting guys in the right spots on the field is big for us.

We can use BABIP to see just how good the Rays have been over their existence (since 2003) at catching not only line drives, but also seeing how they do on grounders, flyballs, and overall. All data comes from B-Ref and is through Friday, June 24th.

By extension, we can also use wOBAcon to appropriately adjust the rates that these trajectories go for extra bases. A groundball may fall for a hit more often than a flyball, but it's almost always going to go for a single and on occasion a double. Flyballs get gobbled more, but they also tend to go for extra bases or get over the wall. wOBAcon will properly rate all these events so we get an idea of how the Rays are doing in the field.

First off, let's look at the overall BABIP and wOBAcon rates for the Rays compared to all of MLB: 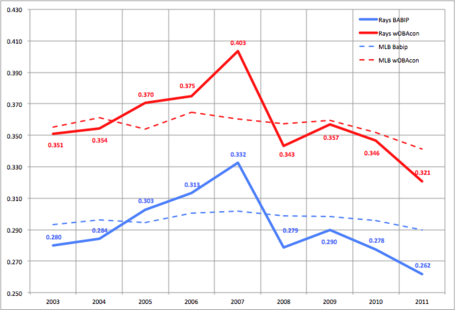 Those that have been here since before 2008 can recall what a disaster 2007 was from a defensive standpoint. As a team, Rays pitching had a BABIP against of .332 and a wOBAcon of .403 both well, WELL above the MLB average. At this point, Andrew Friedman began making a concentrated effort to upgrade the defense where he could choosing low-cost players that could pick it, but might not be very good hitters.

Since then the Rays have been better than league average in both statistics with 2011 looking like they are on pace to shatter previous team bests in 2008 and 2010. You'll notice that the league as a whole as also been in decline. I will touch on this at the end, but for now, let's take a look at batted ball trajectories through this same scope to get an idea of where the Rays are excelling and if Maddon's quote proves to be true: 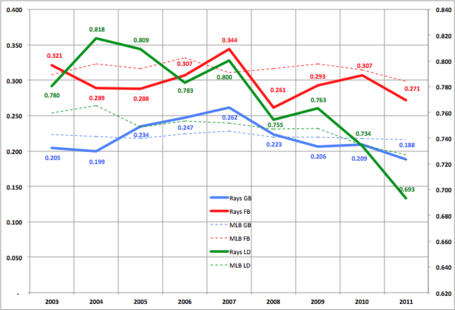 Here we will only be looking at wOBAcon since you can see how closely the track in the first graph. Groundball and flyball are on the primary axis (on the left) while line drive rates are on the secondary (right-hand) axis. I've only added data labels for the Rays as you should only care weather they were above or below league average. Let's look first at line drives. Coming into the season the Rays had never been better than league average at limiting the impact of line drives. Previously, the lowest wOBAcon against the Rays was last year at .734 with 2008 being the next best. Notice any coincidences about where the Rays finished in the standings there? Well this year is incredible so far with a wOBAcon of .693. This seems to back up Maddon's statement to the letter.

Moving on to groundballs, the Rays have had a couple of years better than league average including this year and the previous two. Once again we see 2011 having the lowest wOBAcon at .188 which is well below league average. Also, we again see just how Gawdawful that 2007 was. Flyballs have actually been better than league average in every year looked at with the exception of 2003 and surprise, surprise 2007. 2011 checks in as the second best in the frame looked at with only 2008 seeing better outfield defense. The takeaway here is that the Rays are doing an incredible job at positioning fielders and having a bit of luck so far posting extremely strong rates on all trajectories backing up the historically good rates we saw in the Totals chart.

As mentioned prior, MLB average tends to fluctuate year to year so I think it makes sense to compare each years rates to that moving baseline. We can do this with BABIP+ and wOBAcon+ which are formulated thusly:

We can do this for all trajectories and years and get something like this:

100 would be league average with numbers greater being that much worse than league average with the inverse also being true. For instance, this year the Rays have been 5% better at limiting the impact of line drives than the average MLB team while being 9% better against flyballs and 13% better against grounders! Overall, they are 6% better than the average team which is the best of every year looked at. I'd be interested to see what you, the reader, find interesting from this table in the comments.

I think this is a pretty straightforward look at how well the Rays have played defense so far in 2011 and how good Rays teams have generally had better defense. Let's hope it continues if not improves over the course of the year.