This is a collaborative, three-part series by the writing team here at DRaysBay, looking at the Rays stadium debate in-depth. Part one addresses a possible stadium location, part two addresses a potential facility, and part three addresses possible funding avenues.

Get used to this image, Rays fans and Bay Area residents, as the Tampa Bay Area Regional Transit Authority (TBARTA) unanimously approved this Master Plan Vision for the next 40 years last Friday. Should everything go as planned, the Bay Area will take on the image by 2050, with Bus Rapid Transit, the Long and Short Distance Rail, and the Water Transit funneling from the eight separate counties into the Tampa-St. Petersburg metropolitan area. 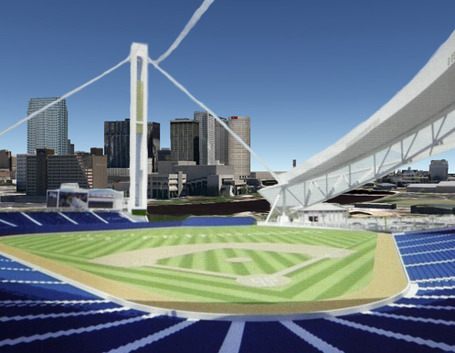 If only a small percentage comes to fruition, then the Rays will be in position to capitalize on the nation’s 19th most populated region. Hillsborough County has seen increases in population and density as Tampa became (arguably) the focal point of the Bay Area over the last decade. The data from the 2010 Census the eight counties in the area rank like this:

The primary drawing pools for a new stadium should focus on Hillsborough and Pinellas counties, with the rest falling into a secondary market. What also becomes evident is that Hillsborough County should hold the future site for a new stadium, preferably within a close distance to Pinellas County. The Riverfront Site proposal from Part One is within Hillsborough County and is bounded by I-275 and the Crosstown Expressway—both serve as critical arteries in linking Pinellas and Hillsborough. Using this base for a new scenario, now it’s time to examine stadium possibilities behind the Riverfront Park location. 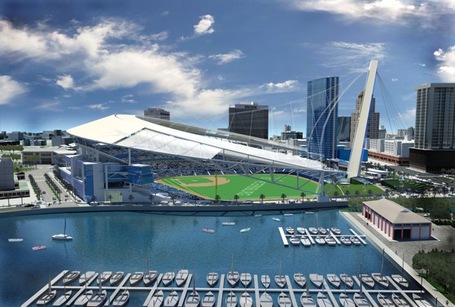 For those that aren’t familiar, this is a rendering of the failed Sail Stadium design proposed by the Rays in 2007. Initial stadium design consisted of the Rays and Populous (the firm in charge of design) choosing functionality and cost-benefit analysis over convention without compromising design. For example, a traditional retractable roof seen in stadiums like Toronto and the new Marlins ballpark can send a $400M stadium into the $600M range. Add the amount of extra land required supporting its footprint and you could be looking at the $700 million dollar range. The benefit is obviously the assured protection against Mother Nature, as well as fan comfort. However, considering that maybe a dozen home games get rained out completely, and that most home games begin while the sun is going down, the revenue lost does not necessitate a nearly 200 percent increase in cost. With the sail proposal, you get the best of both worlds; fans are protected from the sun and rain at minimal cost and the team benefits from unique design. It is for these reasons that the Sail proposal was a perfect fit for this region as well as the Rays and there is no need to drastically change it. 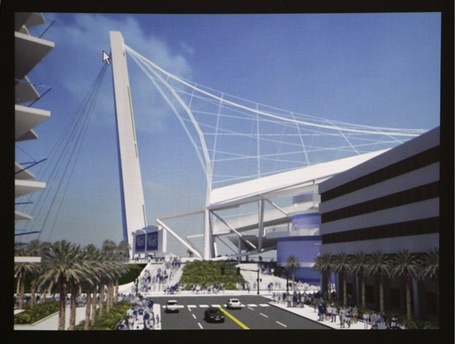 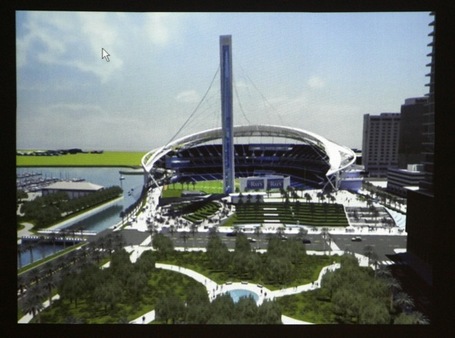 The only addition I’m making personally is something of a pet project of mine. Considering the way the Rays operate (known as the Extra 2% to fans around here h/t to Jonah Keri) I’m proposing that when/if the Rays move forward with a new stadium, they recycle a major part their short history: the Trop. In the interest of paying homage to the past, the Rays can recycle Tropicana Field's roof and catwalk material by creating awnings, coverings, and sculpture gardens around the new park. It's a minor gesture, but one with significance and symbolism, as the Rays are no stranger to turning trash into treasure. 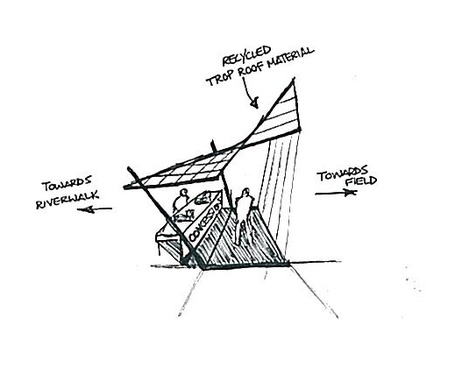