The Governance of the Running Game

Share All sharing options for: The Governance of the Running Game

The Rays' running game certainly looks different on the stat sheets this season. Rays fans have come accustomed to seeing the Rays at the top of the standings Stolen Base Attempt Percentage (SBA%) and Stolen Base Opportunity Average (SBO%). SBA% represents the percentage of times a runner will attempt to steal second base while SBO% shows the percentage that the runner has the opportunity to execute that stolen base attempt.

The stolen base totals would lead one to believe the Rays are not running much at all, but SBA and SBO paint a different picture. Last season, the Rays attempted steals of second base 14 percent of the time they were presented opportunities to run which accounted for 25 percent of their times on base.  This season, the team has seen more opportunities as their SBO% is up to 26 percent but their attempt rate is down as the team's attempt rate is 13 percent at this halfway mark of the 2011 season.

After noticing the decline in steals, I asked Maddon during the pre-game chat if he had changed his previously-stated Republican stance to the running game. Back in early May, Maddon said the team's running game has a Republican feel to it and it was mostly self-governed and he says he still feels the same way. "We have made some mistakes, but I don't get overbearing with that. I believe if you do, you can actually inhibit your running game." Maddon added, "I prefer the free-market principle but we have had problems with getting picked off, even in non-running situations." Maddon believes the team has good base-running exploits ahead of them in the second half of the season and that it will be a necessary part of their game as they go toe to toe with their inter-divisional rivals in the coming weeks. For the complete audio of the segment, click here.

As far as how each Rays player is doing in terms of SBA% and SBO% this season, refer to the table below. 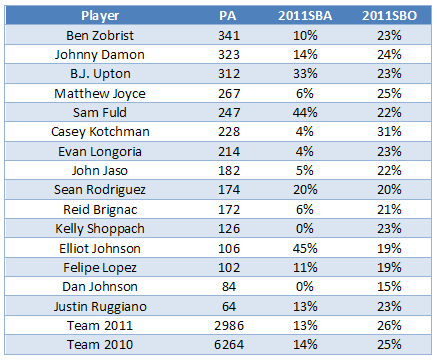 Fuld, Upton, and Johnson are exercising their right to liberty, but Upton is the only one to earn it. Fuld has been thrown out in 8 of his 32 attempts to steal a base which is below the optimal level of 72 percent while Johnson has been successful in just four of his nine efforts this season. Johnny Damon had the highest stolen base success rate on this team entering the season but even he is just 7 for 11 this season. Zobrist is the most successful basestealer so far this season, but his attempts are lower than the others because of the frequency he has been at second base this season as he leads the league in doubles and Zobrist has attempted just eight steals of third base in his career.

The team misses Carl Crawford and Jason Bartlett in the running game, but the team has not helped their cause any with the pick-offs Madden alluded to. Currently, the Rays have the second worst pick-off total in the American League trailing only the Royals in that dubious honor. This comes on the heels of the Rays being the worst team in the American League when they were picked off 34 times last season. The 20 pickoffs the Rays have through 81 games puts them on base to top last year's league-leading total and that is not the title Maddon and the Rays wanted to defend this season.