Let's get this out of the way in the beginning: Seattle isn't a particularly strong team. Sure, they have a winning record and are in second place in their division, but the Rays' pitching should have been able to contain their offense this series, considering they'd averaged 3.5 runs per game. But four days later, the Rays just got outscored in this series 26-11. Darn.

Without a doubt, the story of today's game was J.P. Howell. Howell entered today's game at the start of the eighth inning, defending a one run lead that the Rays had just won back in the top of the eighth. But after allowing a walk and two singles, Maddon pulled him for Joel Peralta, who promptly allowed a three run homerun. This ended up being the difference in the game, as the Rays couldn't get anything going in the ninth inning against Brandon League.

Joe Maddon has been trusting in Howell so far this year, bringing him in during medium-to-high leverage situations even though Howell has only recently returned from an injury. I was with Maddon on this, since outside Peralta and Farnsworth, the rest of our bullpen options aren't the most attractive. But after seeing Howell struggle in yet another appearance, his fourth straight time out that he's allowed a run to score, I think it might be time to reevaluate.

Howell is seemingly struggling with his command. Look at his pitch location for tonight's game; he either left pitches right over the plate or threw them far outside the strikezone 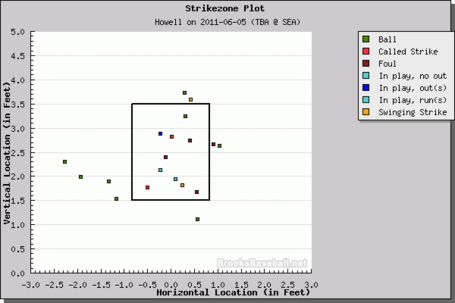 It's not uncommon for pitchers returning from injuries to have trouble with tie command, so I wouldn't be surprised if this is the problem with Howell. Balls are falling in for hits against him at a crazy high rate (.462 BABIP), which I think speaks to him leaving pitches over the plate and letting them get hit hard. I'd have to look back through his past starts to be sure, but it seems a reasonable hypothesis. And if that's the case, we're going to have to deal with Howell's struggles until he gets all the way back.