Tampa Bay Rays and the MLB Draft: A Visual History

Share All sharing options for: Tampa Bay Rays and the MLB Draft: A Visual History

I was going to FanShot this, but decided it was worth a full post because it was so cool. The Process Report published their MLB Draft overview this morning -- it's really comprehensive, so I recommend checking it out -- and there was this gem of a visual in there from Josh Frank, detailing the Tampa Bay Rays' draft pick history since the new regime took over: 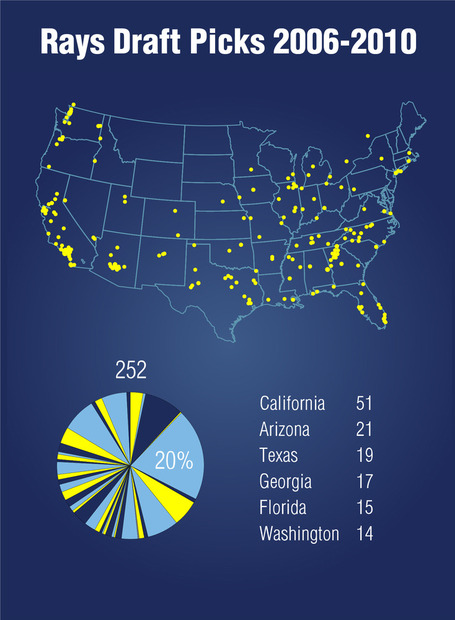 The data for this was collected by Josh too, so huge shout outs to him; that's no easy eask. I'll include some brief thoughts after the jump.

Well, the Rays certainly aren't neglecting the scouting hotbeds -- Texas and California are some of the most scouted areas of the country and churn out a lot of players, so it's no surprise that those two areas are ranked so high. Washington state also seems to be an area of the country that's highly scouted, so again, no surprises there.

Here's an interesting tidbit that Josh passed along, though: the top four metropolitan areas that the Rays have drafted from are Los Angeles, Phoenix, Atlanta, and Seattle. I can't claim to know much about where most draft picks are selected from, but Atlanta strikes me as a bit out of the ordinary. If you look at the map, the Rays have had a lot of picks centered around that area and western North Carolina. Is this a mere coincidence? Does it speak to the quality of talent in the area, or maybe to the quality of the scouts there?

I almost feel sorry for Tim Alexander and Lou Wieben - they're the Rays scouts for New England and the Northeast, and it doesn't look like they've found all too much in recent years. In fact, the Rays haven't drafted any players out of Vermont, New Hampshire, Maine, Connecticut, New Jersey, Delaware, or Maryland. Granted, these states may not produce as much high-end talent as other states -- I don't know this, I'm just surmising -- but at the same time, there's a huuuge pool or people and players to be drawing from in those states. Maybe I'm biased, but at a glance, it looks like that's one area the Rays aren't exploiting as much as they could be.

Any other thoughts? I'm sure many of you are more knowledgeable about this sort of stuff than I am, so have at it.