Share All sharing options for: An Early Look at Home & Road Splits

Something I mentioned on the Podcast was how much better the Rays hit on the road than they do at the Trop, and likewise, how much better Rays pitchers fare at home than on the road. Most teams are going to play better at home than on the road due to familiarity, less travel fatigue, and a million other reasons, but when you consistently see team's (both home and opponent) consistently hitting better at home than on the road then you have to wonder whether how much the park is distorting the numbers. Essentially we're talking about park factors here which should not be a new concept to fans at all levels so I wanted to take a look to see which parks are having the greatest effects and which teams are seeing the greatest benefit.

Here's a look at how each team is hitting and pitching at their home park compared to on the road with explanations and analysis after the jump: 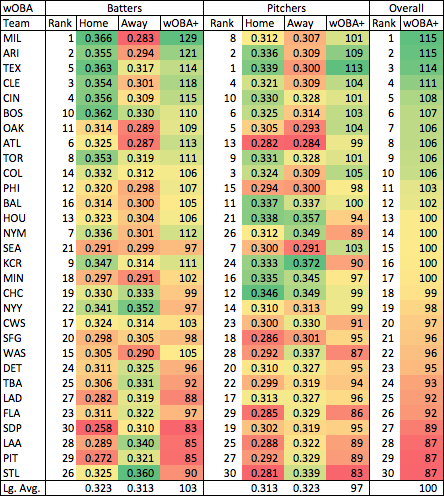 This uses just the batting components for wOBA so base thefts and subsequent captured criminals are not included. For batters, Home and Away show that team's wOBA depending on the location of the game with wOBA+ showing Home wOBA divided by Away wOBA times 100 to show which teams are hitting better at home versus on the road. 100 would be neutral while higher numbers indicate teams that hit better at home and lower numbers indicate teams that hit better on the road. Milwaukee, which is Algonquin for "The Good Land", is certainly feeling good at home by posting a .366 wOBA at Bernie Brewer's House of Drunks while putting up a miserable .283 wOBA on the road. Looking at wOBA+ tells us that they are 29% better on offense at home than on the road. Meanwhile, it should come as no surprise to see the Friars checking in at dead last with a home wOBA of .258 while putting up .310 on the road good for a wOBA+ of 83 (or 17% better on the road than at home).

The Rays check in at 25th as they're hitting about 8% better on the road than at home (.331 on road versus .306 at home). Fortunately the Rays opponents are faring similarly by being about 6% worse at the Trop than in their home confines. Averaging the wOBA+ for batters and pitchers shows that Miller Park is inflating offense by about 15, the most for both home and road teams, with Busch Stadium working hardest to help pitchers by about 13%. The Trop check in as the 24th most hitter-friendly park seeing around 7% less offense.

What does this mean? Well, you should not be surprised by low-scoring affairs at the Trop as both teams are playing in an environment that is more conducive to outs than the typical stadium. Here's a chart showing how the teams stack up: 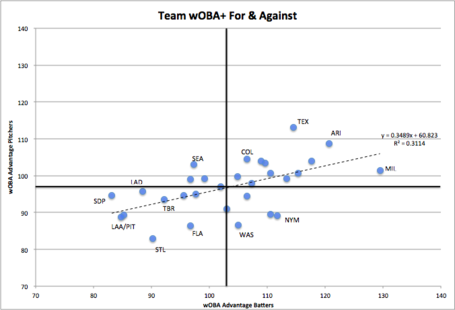 This shows the wOBA+ for batters along the horizontal axis and the wOBA+ for pitchers along the vertical axis. The solid black lines show league average as seen in the table above. The trend line gives an idea for where a team should fall given either the x or y coordinate. The Rays find themselves in the Southwest quadrant which show that batters for both teams are not going to hit as well at the Trop as they would at a league average park. The Northeast quadrant shows teams that play in parks where you would expect both teams to hit better than a league average park. It's unsurprising to see the positive correlation here, though I'm a bit surprised to see the correlation coefficient at .3114 which gives some credence to this study, but shows that we're not quite at the magic number of around .5000.

Switching gears, I wanted to also take a look at how individual teams are playing at their park and on the road while we've got the data collected here. First the chart then the explanation: 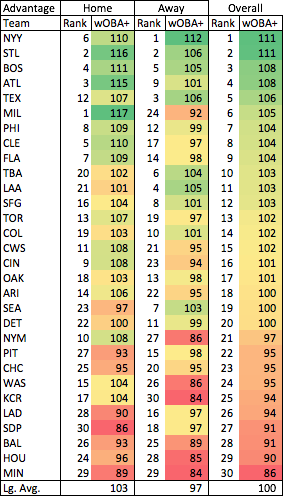 We use the same wOBA numbers in the first chart, but instead of comparing how a team bats at home versus on the road, we're now comparing how a team bats at home to how a team pitches at home (or if it helps, how does the opposition hit at team 1's home park) and the same for a team on the road. The calculation is simply home team's home wOBA divided by home pitcher's wOBA times 100. The higher wOBA+ shows team's that consistently hit better than their opposition.

For instance, the Rays are hitting .306 at home and the opposition is hitting .299 at the Trop. .306/.299*100=102 good for 20th among all teams and just slightly under the league average of 103. When the Rays take their act on the road they're hitting .331 while the opposition is hitting .319 good for a wOBA+ of 104 which is actually 6th in MLB. Averaging those two we get that they are 3% better at hitting than their opposition regardless of park which places them 10th in MLB. It shouldn't come as a shock that the Yankees are hitting regardless of where they are as they're about 10% better than their opponent at home and about 12% better than their opponent on the road coming in first though only percentage points ahead of St. Louis. You can consider this more a judge of the quality of a team whereas the first part was more of a judge of a park as we see the woeful Twins checking in at 14% worse than their opponents overall clumped in with other win averse teams like the Astros, Orioles, Padres, and Dodgers. 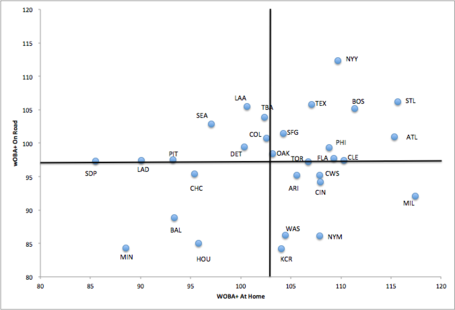 I think this is a nice little tool for betting a few gummy bears as you can see which teams are hitting better than the opposition at home, but not on the road (Milwaukee, NY Mets, Cincinnati), vice-versa (Seattle, LA Angels, Tampa Bay), which ones are mashing everywhere (St. Louis, Boston, NY Yankees, Texas), and which ones are not hitting anywhere (Minnesota, Baltimore, Houston).

This is an early look and more of an attempt to get out the early season findings so that we can come back to it later in the year and see how things changed as schedule imbalances work themselves out as much as that is possible. It's interesting to see just how much the Trop affects offense for both the Rays and their opponent and I look forward to taking another look at this around the All-Star Game and in the off-season.