As many of you are probably aware, trade rumors have already started swirling around B.J. Upton. The Nationals have expressed interest in Upton, going so far as saying they're willing to overpay to acquire a centerfielder, but the Rays have held to their same stance: they're not willing to trade Upton while still in the race.

In my mind, the likelihood of the Rays trading Upton before this season's trading deadline is considerably high. Upton's value may not be sky high at the moment, but it's likely higher now than it will be after this season, considering his salary for next season will be even higher than his current $4.8 million salary. Also, the Rays can use the trading deadline to their advantage, as teams are normally willing to overpay to acquire parts down the stretch. And on top of that, the Rays need to find room on their roster for Desmond Jennings, who has been tearing up Triple-A this season (.387 wOBA). Even if the Rays are still in the playoff race, you could conceivably make the argument that the Rays wouldn't experience a large drop off by switching out Jennings for Upton.

But anyway, let's get to the real heart of the matter: Upton's trade value. How much is Upton theoretically worth, and what should the Rays expect to receive in a package for him?

Assessing a player's trade value is an inexact science, but we can get a good estimate by looking at how a player's WAR (Wins Above Replacement) projections compare with his salary. Here is what I've come up with for Upton: 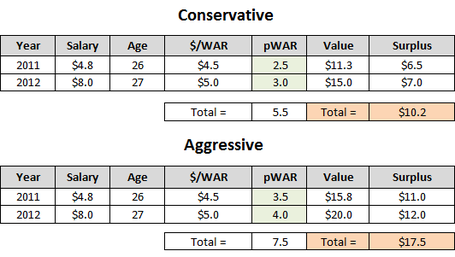 Obviously these are only estimates, and I think it does a good job showing that Upton's value depends a lot on how teams project him going forward. If you don't expect him to improve much from how he's producing right now, then his trade value would be close to the $10 million listed in the "Conservative" estimate. And if you think Upton will produce more like how he did last season, then you're looking at a surplus trade value of around $17 million. If you'd like to play around and enter your own WAR estimates for Upton, please go right ahead.

Going into this season, the Nationals had three prospects ranked in the later half of Baseball America's Top 100 list: Danny Espinosa (#66), Derek Norris (#72), and Wilson Ramos (#96). Espinosa would be a terrific acquisition for Upton, but as he's already in the major leagues and succeeding, the Nationals may be loathe to give him up. Derek Norris looks like a good fit for both sides, but the Rays would likely try to get other players tossed in as well.

Anyway, I'm not doing this to suggest that the Rays should trade Upton to the Nationals -- I'm merely doing it to give us some sort of baseline to center the Upton trade discussions. It's likely that the Upton rumors are only going to start coming faster and faster over the next two months, and we should have some sort of frame or reference so we know how high the Rays should be shooting.

Interesting Note: Upton derives a large part of his value from being an above-average defensive centerfielder, and it's worth noting that while he still has looked great in center to me, the defensive metrics have had very mixed views on him the past few years. UZR thought he was only average last season, while TZL and DRS both had him as well below-average; this season, UZR has him as below-average (-3.5 UZR) while DRS has reversed course and thinks he's above-average (3 DRS).

Defensive stats are still rather inexact, so I wouldn't draw definitive conclusions from any of these stats alone, but I think the overall picture is interesting. All of the stats had Upton having a worse defensive year last season than any other season, and the overall picture so far this year paints him as around average, maybe a bit above. Has Upton gotten worse defensively than he was two years ago? Is this just a result of the imperfections in defensive stats? He's looked as great as always to me in centerfield, but then again, I'm viewing him through the prism of him as a great defensive centerfielder. What if my biases are clouding my judgement?

As he's only 26-years-old, I don't see why Upton's defense would have slumped, but it's something worth keeping in mind. Is he a +5 to +10 centerfielder, or closer to average?