Monday Morning Rays Wrap Up: Buyers or Sellers? Both?

Share All sharing options for: Monday Morning Rays Wrap Up: Buyers or Sellers? Both?

The Rays finished the week with a disappointing 2-4 record and end the first half of the 2011 season with a record of 49-41 a full 6 games behind the Boston Red Sox and 5 games behind the New York Yankees. Andrew Friedman and company retooled their roster this offseason to a degree that causes many franchises to collapse and fight to avoid the cellar. So,  pulling into the All-Star break with a winning percentage of .544 is nothing to feel bad about and an accomplishment that breeds a great deal of confidence in the Rays future. The big question that still needs to be answered is are the Rays are going to be buyers or sellers at the July 31st deadline or, as some have suggested, could the Rays be both buyers and sellers as the deadline approaches? The future of the Rays roster will be a primary discussion over the All-Star break, so let me end the first half with some of my observations and pose a few questions for discussion. Please feel free to use this thread as a free for all to discuss all aspects of the Rays.

David Price took the hill for the Rays a day after being named to the All-Star team against Brian Duensing and the Twins.  The Rays loaded the bases in the first inning but Duensing got Justin Ruggiano to ground into a double play to escape harm. David Price worked 6 innings giving up 4 runs on 5 hits, striking out 6 while only walking 1. Cesar Ramos and Adam Russell combined to work the final two innings giving up 3 earned runs on 2 hits, and a walk. Brian Duensing was the story of the game as he delivered a complete game shutout, giving up 6 singles, striking out 6 while walking 4 as the Twins won the first game of the series 7-0.  It was the seventh time the Rays offense was shut down in 2011.

On Tuesday, fellow All Star James Shields took the mound for the Rays. Ben Revere led off the bottom of the first with a single and moved to third on a double by Alexi Casilla. Shields was able to strikeout Joe Mauer before Michael Cuddyer's  ground out to third baseman Evan Longoria who appeared to have an easy out at home plate (see below) but elected to throw to first allowing Revere to score giving the Twins a 1-0 lead.  In the bottom of the third inning the Rays put runners at first and second with 2-out and Micheal Cuddyer delivered the run scoring single and after Matt Joyce overran the ball allowed the runner from first to come around and score to give the Twins a 3-0 lead.  The Rays got a run back on a Casey Kotchman groundball that Danny Valencia threw wildly to first which allowed Ben Zobrist to score to cut the lead to 3-1. The Rays offense was silent until the top of the ninth when B.J. Upton led off with a solo homer off Twins closer Matt Capps to cut the lead to 3-2. Casey Kotchman followed Upton's homer with a single and was replaced by pinch runner Reid Brignac. After back to back fly outs by Sean Rodriguez and Sam Fuld, Capps issued a walk to Kelly Shoppach putting the tying run at second base. Ron Gardenhire replaced Capps with lefty Glen Perkins who got Johnny Damon to ground out to short and preserve the 3-2 victory for the Twins. The win went to Scott Baker and the loss went to James Shields who went 6 innings, giving up 3 runs/2 earned, striking out 5 and walking three. J.P. Howell and Joel Peralta worked 2 scoreless innings. 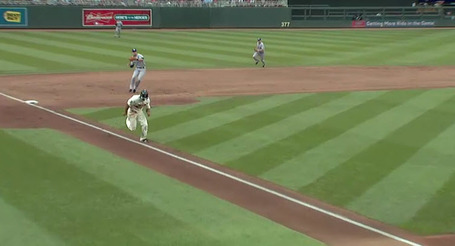 The Rays sent Wade Davis to the mound on Wednesday looking to avoid a sweep at the hands of the surging Twins who countered with Francisco Liriano. The Rays offense gave Davis an early 2-0 lead thanks to a Kelly Shoppach 2-run homer in the top of the second. The Twins responded with 2 runs in the bottom of the third inning on a  2-run single by Michael Cuddyer. The Rays regained the lead in the top of the fourth inning on RBI singles by Elliot Johnson and Ben Zobrist to give Davis a 4-2 cushion and added a single run in the top of the fifth on an RBI single by Justin Ruggiano to extend the Rays lead to 5-2. The Twins cut the lead to 5-4 in the bottom of the fifth inning on a 2-RBI single by Jim Thome. The Rays escaped further damage when B.J. Upton threw a strike to Kelly Shoppach to retire Jim Thome at home plate after a single by Rene Tosoni.  Wade Davis was replaced after 5 innings by Juan Cruz who worked a scoreless sixth but gave up a leadoff homer to Michael Cuddyer in the 7th to tie the game at 5. The Rays regained the lead in the top of the eighth on an RBI single by Evan Longoria, a squeeze bunt by B.J. Upton, and a 2-run homer by Sean Rodriguez which pushed the Rays lead to 9-5 and in the 9th inning Evan Longoria hit a 3-run homer to give the Rays a 12-5 lead. J.P. Howell worked an inning for the win and Joel Peralta and Adam Russell worked two scoreless innings to preserve the Rays 12-5 victory.

After a much needed win against the Twins on Wednesday afternoon the Rays traveled into New York to take on the Yankees and to be part of history as Derek Jeter entered the weekend three hits shy of 3000 hits. The story of the night wasn't Derek Jeter (who had one hit on the night) it was Jeff Niemann who pitched one of his best games in a some time working 7.1 innings, giving up 1 earned run on 6 hits, striking out 4 and walking 2. Meanwhile, the Rays took advantage of a poor start by Bartolo Colon. The Rays jumped to an early 1-0 lead on an Evan Longoria single in the first, added another two runs in the third on a solo homer by Ben Zobrist and a RBI single by B.J. Upton, and  extended the lead to 5-0 in the fifth on a 2-run homer B.J. Upton.  Jeff Niemann gave up his only run on a solo homer by Robinson Cano in the bottom of the sixth inning.  Juan Cruz and Kyle Farnsworth worked the final 1.2 innings and the Rays won the first game of the series 5-1.

The Rays and Yankees game was rained out on Friday evening and the two teams took to the field on Saturday afternoon. David Price was on the mound for the Rays to face A.J. Burnett, but the story of the day again was the pursuit of 3000 hits by Derek Jeter. Jeter got hit number 2999 to lead off the game but the Yankees did not score and Matt Joyce hit a solo home run to put the Rays ahead 1-0  in the top of the second. The game remained tied at 1-1 until the bottom of the 3rd inning when Derek Jeter lined a home run for hit number 3000 joining Wade Boggs as the only hitters to get their 3000th hit on a home run. The Yankees took a 2-1 lead in the third inning on a RBI single by Russell Martin but the Rays tied the game in the top of the fourth on a solo homer by B.J. Upton. The Yankees regained the lead in the fifth inning on an RBI single by Curtis Granderson and a sacrifice fly by Robinson Cano. David Price's day was over at five innings (112 pitches) and he gave up 4 earned runs on 7 hits, striking out 3 and walking 3. The Yankees held a 4-3 into the 8th inning until Ben Zobrist singled in Johnny Damon who had opened the 8th inning with a triple off Yankee reliever David Robertson to tie the game at 4-4.  The Yankees regained the lead in the bottom of the 8th after Edwin Nunez led off the inning with a double and was sacrificed to third by Brett Gardner. Derek Jeter delivered his 5th hit on the afternoon to drive in Nunez and give the Yankees the 5-4 lead. Mariano Rivera came on in the ninth to retire the Rays 1-2-3 and gave the Yankees a 5-4 victory and earned his 22nd save on the season.

On Sunday, the Rays sent James Shields to the mound to face C.C. Sabathia in what would be the last game of the first half of the season and the deciding game of the 3 game series. The game was scoreless until the bottom of the 7th when Robinson Cano singled to lead off the inning and was advanced to third on an errant throw by B.J. Upton on a tag attempt on a fly out by Jorge Posada. Shields was able to get Russell Martin to ground out to third for the second out but Shields released an errant pick off throw allowing Cano to score from third. The 1 run is all the Yankees and C.C. Sabathia needed to win the deciding game of the series. Shields was the hard luck loser, working 8 innings, giving up 1 unearned run on 4 hits striking out 5 while walking 1.

After the All-Star break the Rays open the second half at home versus the Boston Red Sox for three games, the Yankees travel to Toronto for three games, and the Orioles host the Cleveland Indians for four games.

SF1 has had many contrary opinions over the course of this season, so let's see what he has to say about the team moving forward.

A big thanks to mother nature, for the Friday rain out was the only thing preventing this week from being worse than it was. Sorry 2-4 isn't the mark of a contender, so let's see what I feel went wrong.

Two more awful starts by ace David Price is never a good thing, and especially in Saturday's game v AJ Burnett where we actually gave him the lead twice and he lost it. And by the way, he's no all star.

Being shut out by Brian Duensing is a complete embarrassment, and then followed up by Scott Baker dominating us.

James Shields and Jeff 'The Stork' Niemann are really the lone bright spots. Evan Longoria remains in his season long funk, despite as one apologist put it, 'ranks 3rd in ISO among AL third baseman'. Whoop dee doo

Anyway I'm sure you sense my frustration as i realize the playoffs are slipping away from reality and 2012 brings little hope.
Have a good ASB everyone and as usual