Catching Up On How Well The Rays Have Driven In Runners

Share All sharing options for: Catching Up On How Well The Rays Have Driven In Runners

To accrue many RBI a batter must rely on things outside his own ability. It helps to be a very good hitter, but even more importantly is how many runners are on base for a batter. Luckily, Baseball Prospectus tracks this sort of thing making the data mining refreshingly easy. First off, we can see how the Rays rank as a team amongst the other 29 squads across Major League Baseball.  The following chart looks at the 369 baseballers that have more than 100 plate appearances thus far with explanations to follow: 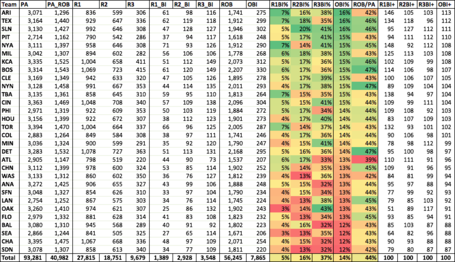 (Open the images in a new tab to enlarge)

Across the top we have plate appearances, PA with runners in scoring position, runners on 1st, 2nd or 3rd. Next comes how many of those runners were driven in from each base, then total runners on base and total driven in.  Lastly we have some calculations showing percentages of runners driven in per runners on base and plus/minuses based on how each team compares to league average.

The Rays checked in at 11th overall driving in 264 of 1,813 base runners.  This translates to 15% of all base runners being driven or about 4% better than league average in total. With a runner on first the team is about 38% better than league average driving in 7%, while runners on 2B come in around 15% of the time or about 6% less than league average. Lastly, when there is a runner a mere 90 feet from home plate he comes in around 35% of the time which is about 3% less than Major League average. All this seems to state that the Rays are better than most using their speed and power to drive in a runner from first while lagging slightly when runners reach more advanced base situations.

You'll notice that the Yankees came in at 5th and Boston checks in at 8th. Our other division mates are near the middle in the form of Toronto at 15 and Baltimore trawling in the marshy depths at 27th. Less rosy is the fact that the Rays are 19th in MLB as far as runners on base per plate appearance with around 43% of plate appearances featuring a proverbial duck on the pond. Looking at this angle shows Boston in 3rd, New York in 9th, Toronto at 21st and Baltimore at 26th. Recall that half the battle of getting a runner in is getting him on. This is where the Rays seem to be falling short.

Let's take a look at the Rays as a team looking at all batters with more than 25 runners on base:

The numbers speak for themselves and you should have a good feel by now, but I love to see Evan Longoria still driving in runners regularly despite not having an up to par season by his standards. Matt Joyce and Longo are near the lead of the team in runners on base per plate appearance as batting in the heart of the order will tend to do when following decent to good on-base capable batters, though you can see that Joyce is no Longo when it comes to executing the batters responsibility of an RBI. Kelly Shoppach has also not hurt for opportunities, but his hack and slash tactics may make a best practices list for a button masher it does not translate as well to moving runners to the dish. Kudos to Ruggiano for leading the team in a small sample and bear in mind that what we're looking at is strictly evaluative and not predictive.

This lineup is at it's best when Zobrist, Longoria, and Joyce are all getting on and hitting with power. If the Rays hope to close the gap in the second half it will require all three to consistently get on and get each other in and contributions from the rest of the lineup to be more on than off.  You can download the sloppy workbook HERE if you want to take a look at this stuff more in depth.