As Mr. Sternfan continually reminds us in each home game recap, this team can't hit at home. His influence knows no bounds because during the broadcast last night, Dewayne Staats and Brian Anderson spent time pointing out how each of the batters were not hitting at home as well.

I have sat in on ten or so of the pre and post-game chats that Joe Maddon does with the media and each time, the topic of the home offense struggles comes up. Tropicana Field is the worst run environment in baseball this season according to ESPN's park factors, which should come as no surprise to anyone that has watched games at Tropicana Field this season. There have been 45 complete game shutouts in baseball this season and four of them have taken place at Tropicana Field with two thrown by the good guys and two by the opposition. The Rays have played 40 home games at this point in 2011 giving us 80 instances of starting pitchers taking the mound at 1 Tropicana Place and of those 80 instances, 43 have involved a starting pitcher giving up two or less runs while throwing at least five innings.

Maddon is as puzzled as anyone on why the team struggles to hit at home.

"It's perplexing. I honestly don't have any good answers. We just do not swing the bats as well here as a group. I don't know exactly where to look for the answer right now, but we have to figure it out because we must play better at home."

Sam Fuld is the only player to really speculate as to why the team struggles at home.

"My experience here is that this is not an easy place to hit. The ball doesn't travel too well. Even the infield, you would think with the turf, it would be a little faster. But it's soft and not a lot of balls get through. I think that's part of it"

The opposition does not seem to have any trouble hitting at Tropicana Field as they have scored at least five runs in 14 of the 40 games played in St. Petersburg this season while the Rays have only reached that benchmark in ten contests so far. Believe it or not, the Rays are not the worst home offense in baseball as it relates to wOBA. The Pirates, Padres, Dodgers, Giants, Mariners, and Angels all rank lower than the Rays but that does not lessen the sting any while watching the lolfense struggle at a laughable level this season.

The chart below shows how each of the returning 2010 Rays have hit at home this season, last season, as well as across both seasons. 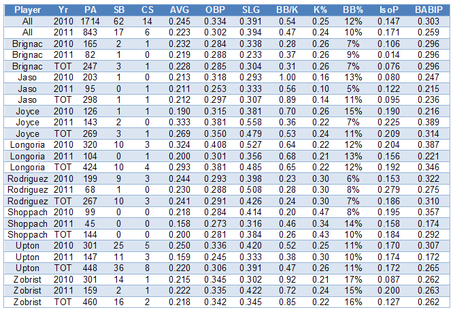 The top of the chart is quite telling as the Rays' team BABIP is 44 points below their efforts last season. How much of that is the luck dragons or how much of that is the drop-off in offensive talent with the losses of Carl Crawford, Carlos Pena, and Jason Bartlett is up for debate, but  that is a sharp decline. The team on base percentage is down 32 points and the team batting average is down 22 points while the slugging percentage and isolated power scores are higher despite the loss of power hitters. Lastly, for all of the noise made about the Rays walking less, they still have a double-digit walk rate at home and have cut down on their strikeout rate a bit, but that is where you can see the Magic of Kotchman in effect as he makes much more contact than Pena did.

At the player level, the results vary rather greatly. Brignac has nearly identical peripherals to lat season but the drop in his power has been dramatic. Jaso's troubles come around not walking as much this season over last year which is a combination of both being a bit less disciplined and pitchers realizing Jaso does not have the type of power that necessitates avoiding the strike zone. Joyce already has more plate appearances this season at home than he did all of last season and has been the one returning player who has seen his production improve over last season. He too has cut down on his walks, but also cut down on his strikeouts and has had no problem hitting for power.Rodriguez is up there with Joyce, but only in terms of hitting for power.

As much as Joyce has improved at home so far, Longoria has regressed. He was a very potent home hitter last season but this year, it is a different story. His walk rate and contact rates are right in line with last season, but the power has dropped off and his BABIP is down 166 points from last season. One has to hope that levels off in the second half. Shoppach was intolerable at home last season and it is even worse this year in the small sample size and right behind him is Upton. Upton's home strikeout rate has gotten worse this season and even when he does put balls in play, they are rarely landing safely given that his BABIP has dropped 135 points from last season.

The only consistent player has been Ben Zobrist. His BABIP is nearly identical to last season, and his batting average and on base percentage are as well. He is hitting for more power at home this year thanks to all of the doubles but you can see a bit more aggressiveness with his walks a bit down and his strikeouts a bit up.

There is no way to polish the turd that is a .223/.302/.394 home slash line, but it is hard to imagine this team continuing to struggle at home for the entire season. They've shown an ability to hit in this ballpark before but the small sample size noise right now is frustrating to everyone from the front office to the field staff to the players and to the fans. Hopefully, there is an end coming to it sooner rather than later whether it come from sacrificing live chickens, appeasing the luck dragons, or changes to the roster.