Share All sharing options for: Canzler Time in Tampa Bay?

It's that time of the year where teams are mostly clearly defined as buyers or sellers and at this point in time the Rays would have to be considered sellers. The Rays have a long list of players that may be moved by the July 31st deadline or at some time during August including Kyle Farnsworth, Jeff Niemann, Joel Peralta, Juan Cruz, Casey Kotchman, Kelly Shoppach, B.J. Upton, and Johnny Damon. The Rays will have an opportunity to take a long look at Desmond Jennings, Brandon Guyer, Robinson Chirinos, and Alex Cobb during the final two months of the season, but should the Rays be getting a look at Russ Canzler over the final two months as well? 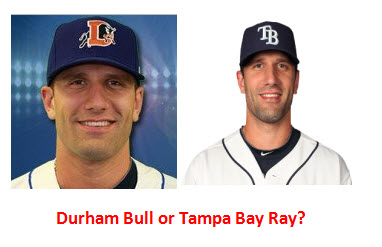 Canzler was drafted by the Chicago Cubs in the 30th round of the 2004 draft and played parts of 7 season in the Cubs minor league system and was signed by the Rays as a minor league free agent in November of 2010. The Rays weren't alone in their pursuit of Canzler as the Florida Marlins, Washington Nationals, Minnesota Twins, and Chicago Cubs were also negotiating for his services. Canzler was sold partly on the number of open positions in AAA Durham and partly that the losses of Carlos Pena and Carl Crawford could accelerate his promotion to the majors. Of course, the fact that he is from Joe Maddon's hometown of Hazelton, PA and played his baseball at Joe Maddon Field may of had something to do with the choice.  Immediately after the signing Canzler told Dave Seamor of the Standard Speaker:

"I know that it sounds like a cliche, but once I step between the white lines, it's my job to perform,'' Canzler said. "If I can take care of my business every day from here on out, I'll get the chance to be seen on a major league field by a major league (coaching) staff and get closer to where I want to be.''

There are several pros and cons to bringing Canzler to the big leagues.  One obstacle is putting him on the 40 man roster but roster spots may open up based on trades made between now and the trade deadline. Offensively Canzler seems ready to make the jump from Durham to Tampa.  He has played in 91 games for the Bulls and has the second highest OPS in the International League at .903. He has hit .299 with an OBP of .400 (second in IL), a SLG% of .503 (sixth in the IL), and has 12 homers, and 61 RBI (fifth in the IL).  Entering Thursday's games, Fangraphs had Canzler with an ISO of .188, a wOBA of .392, a wRC+ of 145, and a more than respectable walk rate of 14.2%.  Some of these numbers are buoyed by a high strikeout rate of 22.7% and a high BABIP of .372.

For those who enjoy baseball the Rays way, check out this video interview with Canzler (here), especially at the 1:17 to 1:42 mark where he talks about the difference between "process" and "results."