Once people come to grips with watching this team as a competitive team and not a playoff team, it is a lot easier to watch

I made that comment in the game recap article two days ago and it was labeled as an aggressively stupid one by one of our more esteemed readers. I figured it would not be well-received because it comes across as a defeatist statement but I believe it to be one founded in realism.

The Lloyd Christmas in all of us wants to believe there is still a chance the team will be playing baseball in October, and the fact CoolStandings and PECOTA still show the Rays with a four to five percent chance of making the post-season feeds keeps that hope alive. However, the Rays-colored glasses that many fans wear make it tough to see the reality that is the fact the Rays have a talent gap on the roster compared to their two main competitors and the self-inflicted mistakes related to lack of execution with runners in scoring position and defensive miscues that have become glorified in recent weeks are not helping matters.

Coming into the season, most of the writers here as well as our friends at The Process Report (RIP) and national media types had the Rays pegged for 87-88 wins and needed some breaks in order to get back to the post-season for a third time in four seasons. Those "breaks" did not include losing Evan Longoria for 26 of the first 28 games this season nor did it include having Manny Ramirez quit baseball 17 plate appearances into the season. Nor did it include the Rays being a sub-.500 team at home or just 15-13 in one run games.

The breaks would include the legendary run of production from Sam Fuld and Matt Joyce at points in this season, the consistent hitting of Casey Kotchman, and the effectiveness of Kyle Farnsworth as well as James Shields bouncing back from his disastrous 2010 with a vengeance. Yet, those gains were essentially negated by the aforementioned bad breaks as well as unforeseen ineffectiveness from Reid Brignac, John Jaso, and Dan Johnson who were all in the opening day lineup and considered the primary starters.

The fact of the matter is the team has dug itself into quite a hole up until now as they reach the 100 games played mark. With just 62 games left on the schedule, the Rays would have to go 42-20 while the Yankees went 35-30 to surpass them in the standings while hoping the Los Angeles Angels of Anaheim cool off as they have now overtaken the Rays in the wildcard standings.

It is completely possible to see the Yankees finishing 35-30 the rest of the way given their own problems, but expecting the Rays to play .678 baseball over the final 62 games requires a heavy dose of homerism or tunnel vision that focuses on the Rays roster. As Tommy Rancel said on Twitter yesterday, this team with Desmond Jennings, Alex Cobb, Robinson Chirinos, and Jake McGee is more exciting than it was last week, but is it enough to close the existing gaps in talent between the Rays, the Red Sox, and the Yankees?

Weighted Runs Created Plus (wRC+) is defined by Fangraphs, measures how a player's Weighted Runs Created compares with league average. League average is 100 and every point above or below 100 defines how much better or worse that player's total offensive value is. wRC+ is also park and league adjusted, which eliminates the easy out option of park factors in a discussion that compares the Rays, Red Sox, and Yankees. The chart below shows the wRC+ production of each position on the rosters of the Rays, Red Sox, and Yankees with the totals shown as cumulative figures meaning right field reflects the value of Matt Joyce, Ben Zobrist, Justin Ruggiano, and Sam Fuld. 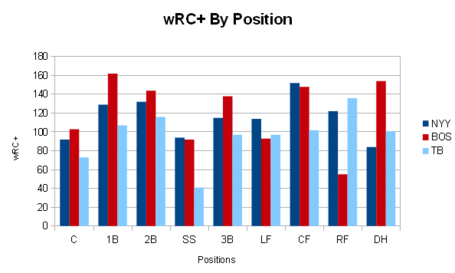 The Rays are inferior to both of their competitors at catcher, first base, second base, shortstop, and center field. The only spot where the Rays exceed the value of their competition is in right field. Upton, by some figures, is having a good season, but Jacoby Ellsbury and Curtis Granderson are having great seasons. Casey Kotchman has been a wizard at the plate, but his magic pales in comparison to the production of Mark Teixeira and Adrian Gonzalez.(Ed: Kotchman is ahead of Teixeira in wRC+. Dan Johnson's numbers drag down the team comparison). Ben Zobrist has arguably been the team's most valuable player this season, but his offensive production and Sean Rodriguez's at second base does not hold up to Robinson Cano and Dustin Pedroia's work. Alex Rodriguez, despite his own injuries, and Kevin Youkilis, have outproduced Evan Longoria.

The starting pitching staff on this team is as good as any staff in baseball this season, but pitching and defense can only do so much. The margin of error for this team was slim given the financial and talent disadvantages coming into the season, but the talent gaps have only grown further apart as the season has progressed. The new influx of talent has made the product on the field more competitive despite the short-term outcomes, but the recent additions should not be viewed as a push to the playoffs. Instead, they should be considered as 2012 preparation as the experience accrued the rest of this season will better prepare Cobb, Jennings, Chirinos, McGee, and eventually Brandon Guyer for another chance at the post-season in 2012.