After being effectively silenced the last two games by Twins pitching, the Rays unloaded today against Francisco Liriano and his band of merry bullpen brothers.  Every Rays starter reached base this afternoon -- although, this is tempered a bit by the fact that Liriano allowed four walks and three hit batsmen.  The troubled Twins starter certainly did not have his best command today.

Both teams collected fourteen hits and six walks, but the Rays were able to push past the Geminis thanks to some heaving hitting in a four-run eighth and a three-run ninth.  With the score tied 5-5 in the eighth and runners on first and second, Evan Longoria smacked a single through the left side to score Sam Fuld and give the Rays the lead.  The Rays wouldn't stop there as B.J. Upton would execute a perfect safety squeeze on the next pitch to score Ben Zobrist.  Following BJ's first-pitch example, Sean Rodriguez would smack a liner that just cleared the fence in left for a two-run homer.  So, after the monotony of the early innings filled with walks, hit batsmen, and runners left on base, three Rays  hitters plated four runs in about two and a half minutes in the eighth.

I almost didn't mention SRod's homer because, of course, it was only a two-run affair.  Since three-run blasts are the only stat that really matters, Evan Longoria was the real star of this game.  Forget his aforementioned go-ahead, and ultimately game-winning, RBI.  No, the real fireworks came out when Longo slapped a three-run round-tripper off Phil Dumatrait in the ninth to extend the Rays lead to seven.  Yes, the game was well in the Rays' favor at this point, and there's the pesky fact that I'm facing Longoria this week in fantasy, but it was nice to see the Rays' cornerstone put some solid wood on the ball.

Bullets after the jump... 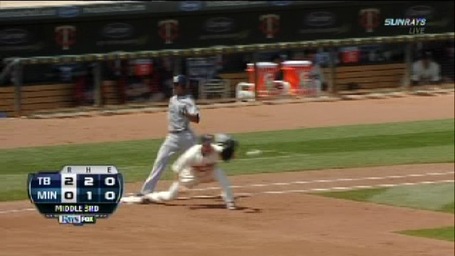