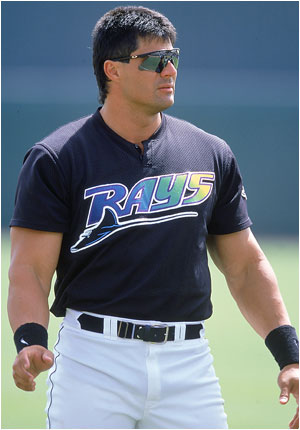 The 1999 team is a fun one to look back on. A 41 year old Wade Boggs hit .301 with a .377 OBP. Fred McGriff had a great season hitting .310/.405/.552 with 32 home runs and 104 RBI. Kevin Stocker and his .299 average and .369 OBP were even kind of useful. Jose Guillen, then only on his second of what would be 10 teams, got 186 plate appearances. Julio Franco somehow got himself one at bat. No starting pitching finished with a winning record or ERA below 4.22, which isn’t surprising when the names are Bobby Witt, Wilson Alvarez, Ryan Rupe, Rolando Arrojo, and Dave Eiland. Future Opening Day starter Albie Lopez threw 61 innings of relief. Former Nasty Boy, Norm Charlton, was even in the bullpen. Wade Boggs junkballed his way to 1.1 innings.

Despite all of that weirdness the one lasting memory I have from that team is Jose Canseco. The hulking monster in the white, green, and purple jersey was the first (Devil) Rays hitter elected to the All-Star Game, based on the merits of his 31 home runs. His 1999 season is still far and away the best any Rays DH has ever done. In fact, his first three months would be good enough for that honor:

In a stretch from May 16th-May 21st Conseco homered in five consecutive games.

A back injury would prevent him from playing in the All-Star Game, and would limit him to only 74 PA’s combined in July and August. He returned in September and October, but wasn’t himself, putting up a .759 OPS in 103 PA’s. It would be his last truly productive year in baseball.

For three months in 1999 Jose Canseco made the Devil Rays fun to watch. That alone merited an All-Star berth.