Why This Trade Deadline Kinda Stunk

Share All sharing options for: Why This Trade Deadline Kinda Stunk

Now that the trade deadline has passed, many of us are feeling conflicting emotions. Some people are quite glad we didn't trade Upton, while others out there are disappointed that the Rays didn't make any moves. I fall into the later category; for me, this deadline was incredibly frustrating.

We all know how the chips lie right now. The Rays are out of the playoff race in 2011. They have a number of players on the team that will either be leaving via free agency after the year (without any compensation picks), or will be getting much more expensive this offseason. As the Rays are a small market team and must try to extract as much value as possible from their investments, it seemed logical to expect them to make some moves by the deadline.

At the same time, I did state that the Rays were in the driver's seat: they didn't have to make any trades, and could afford to make sure they got good value for their trade chips. That's most likely what happened; the Rays didn't feel they were offered attractive deals for any of their players, so they chose to refrain from making any trades.

And a part of me wants to accept that. This front office has a long track record and should have our trust on evaluating the market. If they felt there weren't any good deals being offered to them, there likely weren't. They can always wait until this offseason to trade away players.

But another, larger part of me wants to scream out, "GAAAAHH!" Let me explain why.

This is a difficult year to categorize: it wasn't necessarily a buyer or seller's market, as there were plenty of both good and bad deals that went down. Hunter Pence and Carlos Beltran both brought back good returns, while Michael Bourn was traded for what felt like pennies to the dollar. Ubaldo Jimenez brought back a decent return in prospects, but I was still left underwhelmed by the total package for the Rockies. The Nationals were seemingly interested in adding an outfielder like B.J. Upton or Denard Span, but unwilling to trade anyone outside of Tyler Clippard and Ian Desmond.

If I had to pick one, I'd probably say it was a buyer's market. Hunter Pence was the only player whose return blew me away, and I wouldn't have liked the Bourn return for B.J. Upton. So in that regard, I'm glad the Rays held onto Upton.

And yet, there were still values to be had on this year's market. In particular, relief pitchers brought back some great returns:

Koji, Ziegler, and Adams are all better pitchers than Kyle Farnsworth and Joel Peralta, but it doesn't seem that unrealistic to me that the Rays could have put forward some sort of competitive package in all of these instances. And hey, maybe they did and it was never reported. All I know is that it was disappointing to watch both Chris Davis and Brandon Allen -- two powerful young hitters that would be worth a flyer as a 1B or DH -- get traded for a reliever without any apparent action by the Rays.

Status of the Organization

Since the Rays are now out of the 2011 race, they should have their eye fixed firmly on planning for 2012 and beyond. But when I look at the projected 2012 roster right now, I'm not terribly overwhelmed by it: 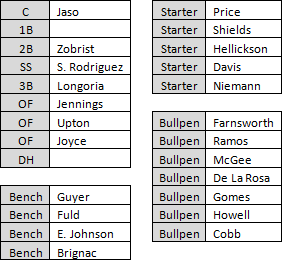 This is a solid team, not doubt about it, and it's good enough to compete if things go well. But for the most part, this roster is very similar to the team the Rays are fielding right now, and we all know how frustrating they can be to watch. Going into 2012, the Rays have multiple holes on offense -- shortstop, first base, and DH -- and they can't fill them with top prospects; the Rays have no more top position prospects coming up until Tim Beckham and Hak-Ju Lee reach the majors. So what can they do?

Well, signing free agents is going to be difficult. The Rays will still likely be sticking with a payroll around the $40-50 million level -- after this season's attendance, why would they increase it? -- but they won't have as much flex room as they did this past offseason. Their current payroll is around $42 million, and even though they will be shedding around $13 million in free agents (Damon, Ramirez, Peralta, Cruz, Kotchman, and possibly Shoppach), they will see significant salary increases in other parts of their roster.

Players getting raises due to long term contracts will add $6 million to the payroll (Shields, Zobrist, Longoria, Farnsworth, and Davis), and the Rays will have six players eligible for arbitration: Howell, Rodriguez, Niemann, Joyce, Upton, and Price. These players won't come cheap; even if we estimate they will only receive a group raise of $10 million, that will put the Rays' 2012 payroll at $45 million (my estimates put them closer to $48 million). And that's without addressing their holes at first base or DH, and sticking with the status quo at shortstop.

This is why Upton will get traded. For him to stick around in Tampa Bay, he'd have to sign a long-term extension that would keep his salary around the $4-5 million level, and there's little incentive for him to sign such a deal right now. The Rays evidently didn't feel they were getting good offers for him this trade deadline, but he will need to be traded this offseason to give the Rays some wiggle room for 2012.

And this is also why I wish the Rays had done something this deadline. Trade away Damon, Shoppach, Peralta, Farnsworth, etc., even if you don't get the best return on them. Just get something back, and hopefully add a piece like Brandon Allen or Chris Davis....someone with question marks, but with the potential to fill a hole for the team going forward.

The Rays will have plenty of time to make moves over this offseason -- and making no trade is better than making an unwise trade -- so all is certainly not lost. I'm just disappointed with how the trade market worked out and disappointed with how this team looks (right now) heading toward 2012, so I needed to vent. If you made it this far, thanks for listening.