This Week In Sun Sports

Share All sharing options for: This Week In Sun Sports

About a month ago, master-of-the-realm Steve Slowinski came across a funny series of articles on Mets SBN sister site Amazin' Avenue called "This Week In SNY." These were recaps of a sort, but not of the gameplay, rather the odd, goofy, or error-filled portions of the broadcast or the dugout. Our other writers agreed with Steve that this was an amusing venture and could perhaps lend an air of brevity in this gloomy season. So, we blatantly ripped it off. Thanks for the idea, AA, and please come up with more stuff that we can steal. And now, This Week In Sun Sports:

We begin with the message: "We're always watching." Whether it be the players on the field, or in the dugout, the announcers in the booth, or the fans in the stands, we see you. Just like Ted Dansen, here: 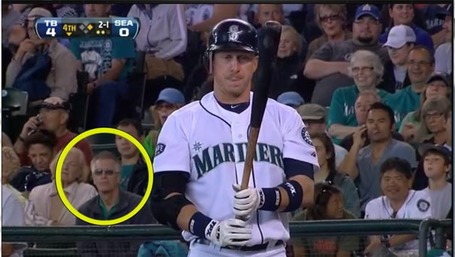 Yeah, probably not Ted Dansen, but jut look at him for a second. Is he watching Mike Carp get ready for a 2-1 offering, or is he watching you munch on a bowl of mixed nuts? It's as if his gaze pierces the television. Even now, just a screen capture, I feel like he's gazing into my soul like Viggo the Carpathian. I should probably go put some pants on.

Later in the game, announcer Brian Anderson reminds us why he's in the booth:

Here, he's showing off one of the 10,000 ladies tees that were to be given away during the Rays next homestand. I'm not sure why he's looking below frame in shock at this particular moment, but perhaps he's simply verifying that he should not be wearing a ladies tee. If he were ever unsure on that matter.

"This doesn't work in the real world."

More after the jump...

Todd Kalas found a bright-eyed group of little leaguers and BA found the all-star simply by looking for the hair. 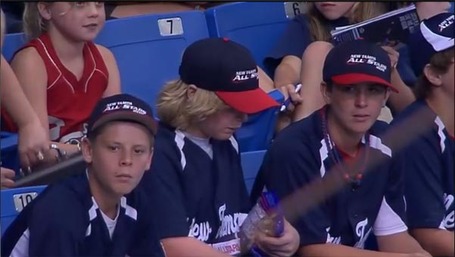 At first, I thought he was talking about the girl seated behind in the red, but when he said, "Spicoli," I knew he was talking about the kid looking at food. While it's not a pizza, I'm sure he and his buds will grow into some kind gentlemen and get through their share of sticky situations probably while wearing Reef--er--Teva sandals. This may be the pot calling the kettle 'black,' but BA went on about this kids hair a bit too long. Trying to overcompensate for something?

It's common practice to not mention when your player is throwing a perfect game or no-hitter because just the sheer mention of it might jinx him. This also appears to jinx batters as well. Casey Kotchman, if you haven't heard, is having a fantastic season--a career year. There has been much made of this on the telecasts and the only reason I can think of is that they're trying to lay on the jinx. They did this no harder than against the Blue Jays when they showed this split screen and compared the hitting prowess of the two men: 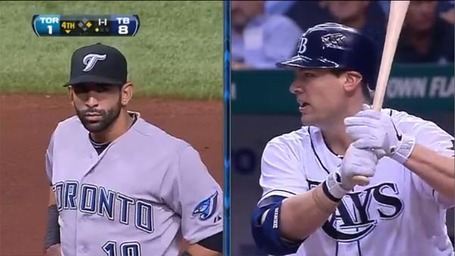 One pitch later, Kotch would ground into a double play.

Jinx? I leave that up to you to decide. 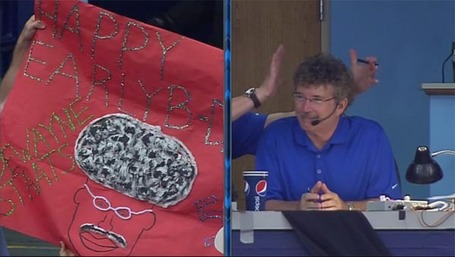 Some amazing group of kids made this poster for Dewayne Staats. Brian Anderson had a few choice words:

And how about this, De-Wayne. Happy Early Birthday? Were you trying to sneak that by us?

You have a nuclear explosion coming off your head. Looks like a mushroom cloud.

And, here's the best one. I wonder if you can detect the sadness in BA's words:

I can't believe you tried to sneak it by us. Now, I was able to sneak my birthday by everybody. Yeah, five-holed the whole group, no one even knew. You were trying to do the same thing, and you got busted by kids. That's what makes it funny.

I don't know about you, but I'm detecting a little jealousy from BA, here. When someone five-holes a ball, that's a mistake. It's a fairly egregious error. So, when BA says the group "five-holed" his birthday, he's saying it's their fault. E, staff. And when a group of kids remembers Staats' b-day early, then that's just salt on the wound.

But, as always, Todd Kalas saves the day a few innings later as he recovers BA's dry cleaning from somewhere near the bullpen. 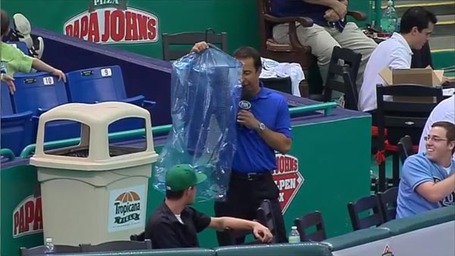 It seemed like fun all around the ballpark as Tom "Dave" Foley got pranked on in the dugout around the 7th inning. 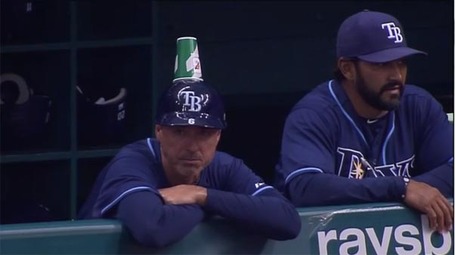 He eventually figured out it was on his head, but who could have done it? 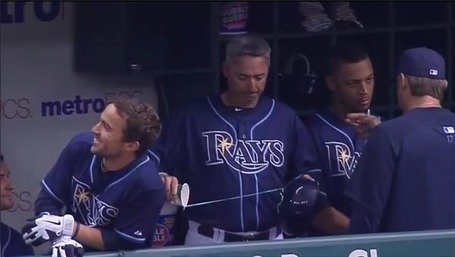 The classic cup-and-gum on the helmet trick. It could be Sam Fuld with the giant smile. But my guess is... 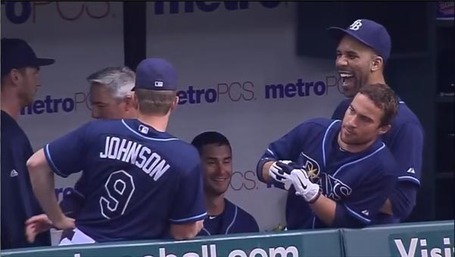 Against the A's we have a few videos.

If anyone has better quality, or a lead on a better program to capture, please let me know.

Later, David DeJesus gets distracted by one of three things:

Yes, the answer is probably "A bee" as he mouthed to the umpire, but I like to think that he was upset that he could never accomplish the feat of having 69 Home Runs and 420 RBI. Just think if a few of those doubles had been home runs and a few had been K's. Wow, if only we had a player like that.

On a bright and sunny kids day, players were asked what was the one thing they couldn't live without. Johnny Damon's cluelessness aside, I think this one is pretty self explanatory: Kelly Shoppach does one hell of a Dioner Navarro impression. (r/a Steve Slowinski for the tip)

Anyways, that's it for this week. Please feel free to leave comments on what we can do better in this segment or other things we should be looking at. If you see something during a broadcast that would fit in this segment, please send it along to ThisWeekInSS@gmail.com. Screen grabs are ideal, but all we really need is a description of what happened and when (Inning, Outs, count, etc...). See you next week.